This is the sixth report I have done on the H&N Excite Smart Shot copper-plated lead BB. I crammed a lot into today’s report, and this will be the last time we look at this BB for some time.

There were so many questions about what the Smart Shot could and could not do that I decided to pack as much as possible into this report. Let’s begin with the performance in a semiautomatic airguns with blowback.

Performance in guns with blowback

I tested the Smart Shot in a Makarov Ultra from Umarex. I know some people wanted to see it shoot in a 1911A1, but the one I have has not been tested yet, so there is no baseline. We wouldn’t know where the results fell against BBs, and there is no time in today’s test to also test the gun with conventional steel BBs.
Most blowback airguns work in pretty much the same way, so testing one is like testing another. They have a single stack BB magazine and the BBs are pushed up to the top where they are blown into the barrel and out of the gun with the shot. No magnets are involved, so the functioning should be okay with lead shot.
The concerns are will the BB remain in the magazine until it is blown out by the gas? Secondarily, what differences are there when shooting a BB that’s 2.5 grains heavier than the gun was designed to handle?

I used the UTG Monopod to rest the gun. I rested my shooting arm on the monopod and held the pistol forward of the rest. The hold was steady despite the rather heavy trigger pull of the Ultra.
The magazine loaded normally — just as it would have with steel BBs. They aligned and went to the top of the mag when the follower was released, and although I did not intend it, I let the follower slam against the stack of BBs both times. There were no problems from that, which addresses the concern over their ruggedness.

I then shot 2 targets with 10 shots each. Before we look at that, let me show you the best target this pistol shot when it was tested, back in 2014. I shot Umarex Precision BBs in that accuracy test and the 10-shot groups at 5 meters ranged from 0.916-inches between centers to 1.189-inches. 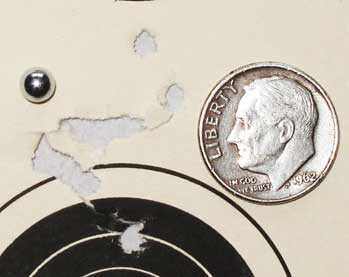 With steel BBs, the best group this Makarov gave measures 0.916-inches between centers.

The first group of Smart Shot BBs went into a group that measures 1.423-inches between centers. I used a 6 o’clock hold, which means I was aiming at the bottom of the black bull. The group is centered on the bull, left and right, but hit about 1.25-inches lower than the aim point. That is the additional weight of the lead BB at work.

There are nine holes in the target, because one BB rolled out of the muzzle of the gun as I was shooting. Since the Makarov slide remains open after the final shot, there is no difficulty determining this. Plus I heard it fall and found it on the carpet after the string.

Because the shots impacted below the target I photographed them where they were instead of the usual way. The BB holes in the cardboard backer should give a good idea of the group size.

Nine Smart Shot BBs landed in a group that measures 1.423-inches between centers at 5 meters.

I shot a second group, just to see if the first one was typical. This time I elevated the front sight in the rear notch to raise the location of the group. It isn’t as precise that way, but at 5 meters it will do. This time 9 BBs when into 1.46-inches, which is close enough to the first group to make me think this performance is typical.

Once again, one BB rolled out of the gun as I was firing the string. I don’t know what causes that, but it is consistent. And it doesn’t happen in any order. The first time I had fired 8 shots when it happened. The second time I had fired 4 times. 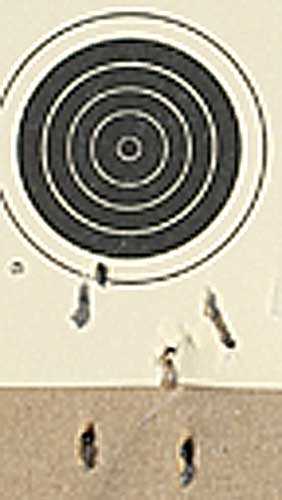 Sorry about the focus on this one. Nine Smart Shot BBs are in 1.46-inches at 5 meters. The aiming was less precise to raise the group on target, which may account for the slightly larger spread.

From this test I conclude the Smart Shot BBs will work in blowback BB guns, but you may experience some feeding problems. Accuracy is comparable to that of steel BBs, but not quite as good. Use Smart Shot BBs whenever there is a concern for safety.

In the second test I used a Daisy 880 multi-pump pneumatic BB gun under the same test conditions — 5 meters and the gun rested on the monopod. I would show you the accuracy of the 880 at 5 meters with steel BBs but that’s not relevant because the Smart Shot BBs failed to work correctly.

I pumped the rifle 3 strokes, because it shot best that way in the accuracy test with steel BBs. Then I loaded a Smart Shot BB and prepared to file. As I held on target, I heard the BB rolling down the barrel. I shot before it fell out the muzzle, but there is no way to use this lead BB in an 880, or in any BB gun like it that uses a magnetic bolt tip to hold the BB for firing. The same holds for other BB guns like the 880 that have magnetic bolt tips — like the Crosman 2100B. These guns are rifles that also shoot lead pellets, so their bores are larger than BB-size to accommodate the larger pellets. Hence the smaller BBs have to be held in place until the air blast hits them, or they will just roll out when the muzzle is dipped below level.

If a gun uses a magnet to hold the BB in place for shooting, Smart Shot BBs will not work. This applies to all guns where a magnet is used this way.

In this test I loaded the Smart Shot BBs into a vintage Crosman M1 Carbine BB gun and shot targets at 5 meters. The monopod was used to steady the rifle.

The first target I shot gave me a larger group because I wasn’t concentrating on the sight picture. I feel that group, which measures 1.644-inches between centers, is not representative for this reason. So I’m not showing that target. But in that first target I put 8 of the 10 Smart Shot BBs into a group measuring 0.81-inches. So I shot a second group to see if I was correct about the hold.

The second group of 10 shots measures 1.108-inches between centers. This time I held perfectly for every shot. This group is about as good as this BB gun can shoot. 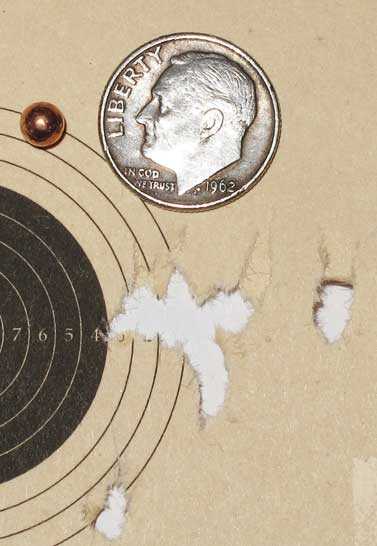 There were no failures to feed this time. The M1 Carbine has a gravity feed system that requires the BB to fall down and turn a corner to align with the bore. It handled the lead BBs like they were made for it.

Smart Shot BBs function fine when they feed through gravity-based BB gun systems. And in this case, they were also extremely accurate.

Someone asked me whether the Smart Shot BBs could be fired at a steel bullet trap. So I used the M1 Carbine and stood 5 feet from my steel rimfire trap and let fly. There was a cardboard backer over the opening to the trap to keep everything inside. That’s needed for lead pellets, as well. Naturally I wore safety shooting glasses when doing this.

All 10 BBs hit the backstop and stopped cold. Not one of them bounced back to hit the back side of the backer board. When I examined a BB caught in the trap it was flattened on 2 sides — indicating it hit the steel backplate, then deflected down to the steel plate at the bottom. Nine of 10 BBs wen into the waste tray at the bottom of the trap and only one was recoverable.

Smart Shot lead BBs can be shot safely into a steel bullet trap. I advise you to use a cardboard backer on the trap’s front to keep the waste BBs inside.

I have now tested Smart Shot lead BBs in numerous ways throughout this 6-part series. We found out what they can do and also what they can’t do. O can sum it up like this. If you want to shoot BBs at hard targets safely, such as shooting at metal action targets, Smart Shot BBs are the way to go. You still need to wear eye protection, but the rebounds have far less energy.

On the other hand, using Smart Shot BBs for a purpose for which they were not intended, like in a Daisy 499, is marginal at best. You can sometimes get them to work, but what’s the advantage of shooting expensive lead BBs when cheaper steel BBs do just as good, if not better?

Smart Shot BBs exist for safety’s sake. They reduce the rebounds from hard targets demonstrably. Use them for that and they won’t let you down.