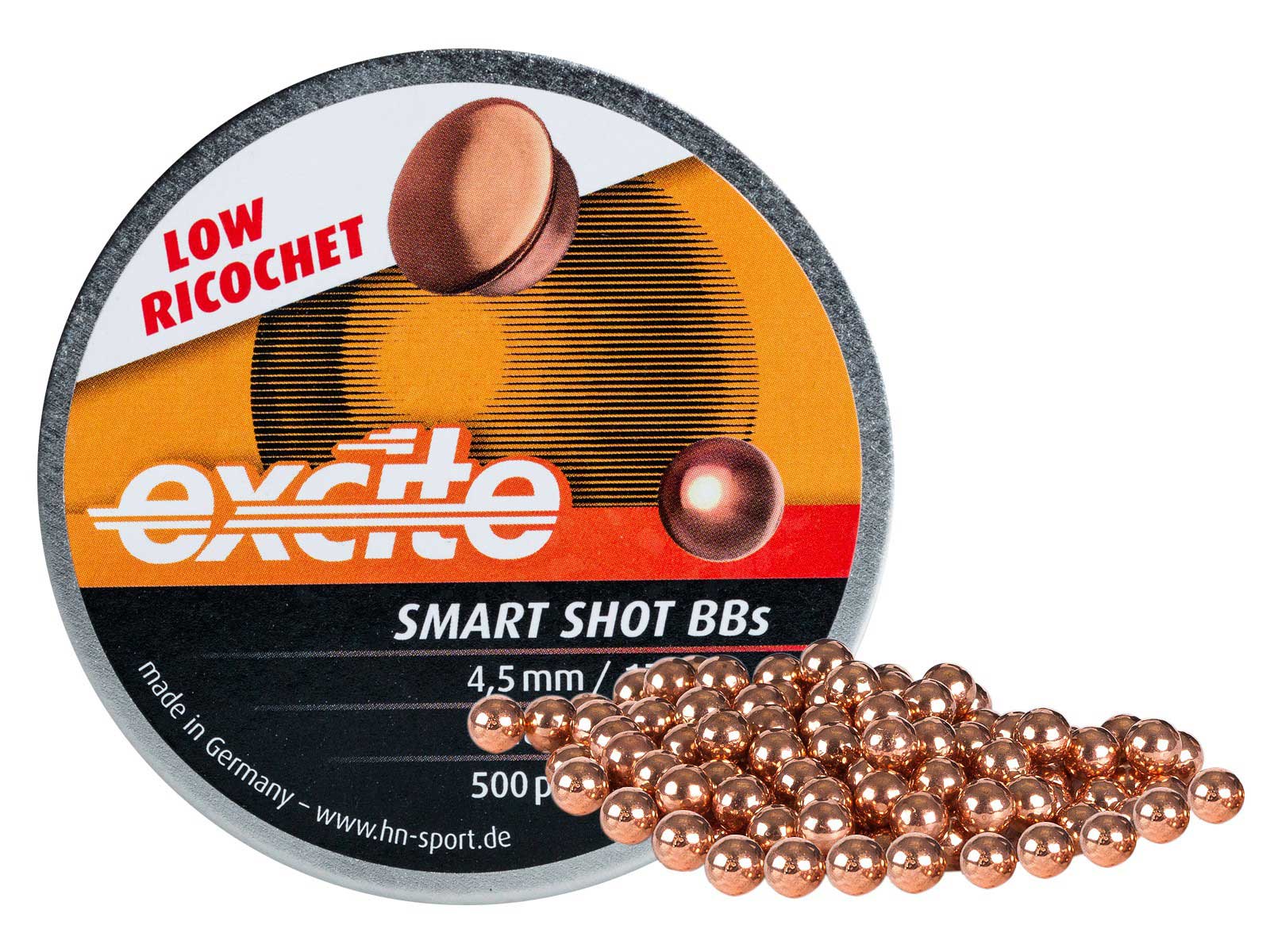 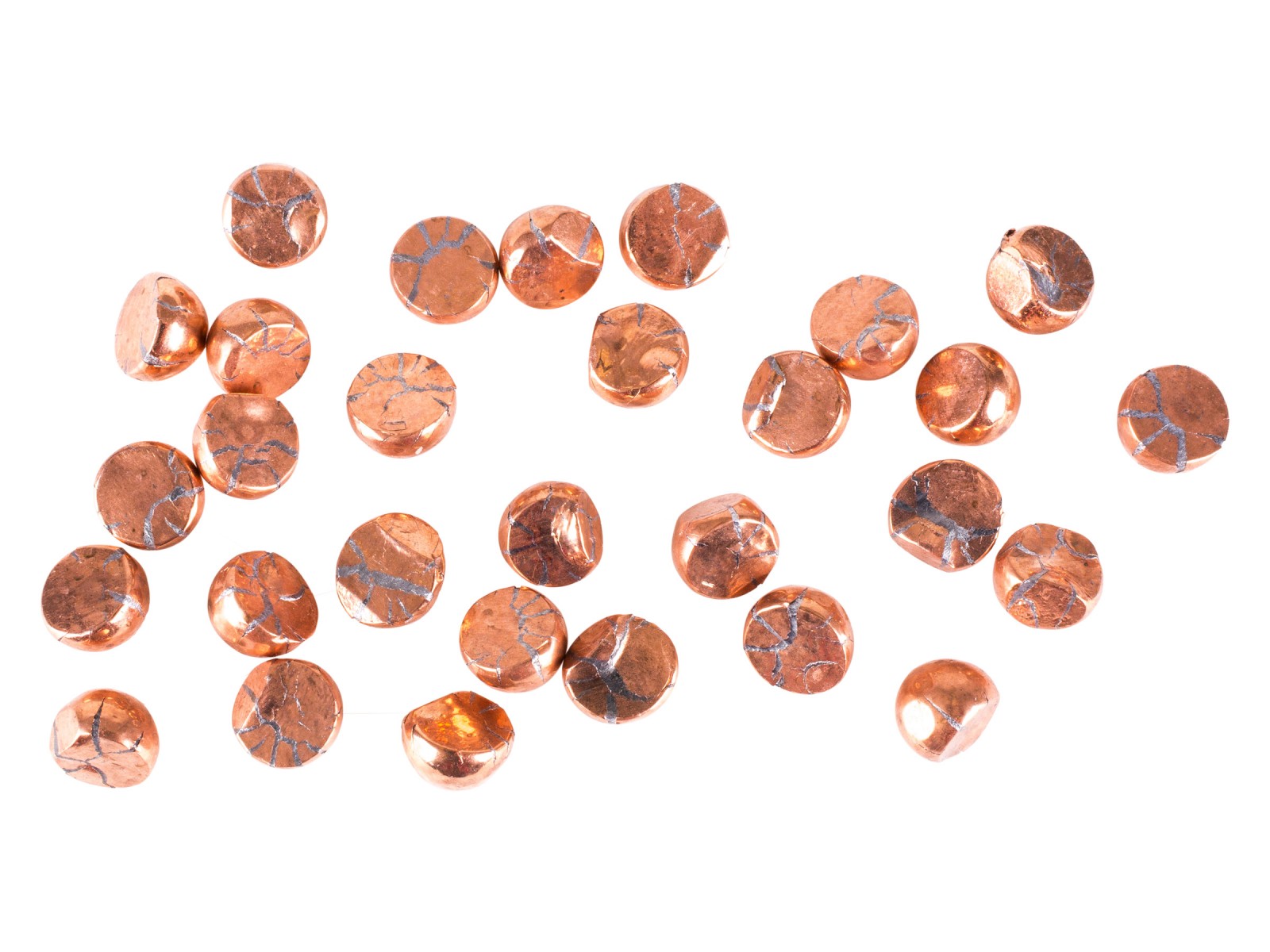 click to see more from this manufacturer
Put 4 in your cart. Pay for 3.

Have you ever shot steel BBs at a hard surface? We sure hope not because it's not a very good idea. But if you have, you know they ricochet! What if you didn't have to worry so much about ricochet and could shoot at something hard like a steel target, or even compete in a Cowboy Action Shooting like competition with a BB gun? Now you can!

Until now, traditional steel BBs weren't your best option for this type of 3-Gun competition because of ricochet. With the Smart Shot BBs worry less about ricochet and cleanliness and spend more time shooting. They're a great option for indoor shooting range and gallery rifles. If you're tired of plinking with the same old tin can because you're worried about ricochet, now you can enjoy shooting at steel targets.

The Excite Smart Shot BBs go through the copper-plating process not once, but twice. They're the exact same diameter as steel BBs (4.35mm). That rigorous process means the Smart Shot BBs are hard enough to prevent lead deformation in the magazine of your gun, but still soft enough to flatten on impact, meaning less ricochet worries for you. Since these BBs keep their shape so well, theyre a great option for your spring-loaded magazines.

PLEASE NOTE: Since the Smart Shot BBs are made from lead they work best in BB guns that do not require a magnet to keep the BBs in place for shooting.

Brief history by Tom Gaylord:
The first BB used in an air rifle was BB-sized lead shot used by shotgunners. In the day when it was popular (the 1880s), shot was sold in bags in hardware stores and came in various numerical and letter sizes, including sizes B, BB and BBB. BB shot was supposed to be 0.180 inches in diameter and weigh more than nine grains.

At the turn of the 20th century, Daisy reduced the size of what they always called air rifle shot to a lead ball 0.175 inches in diameter. That saved them lead and also went faster because it was a lighter ball.

In the 1920s Daisy discovered that some boys in Minneapolis were using steel ball bearings that they were salvaging from a reject pile behind the American Ball Company. They checked the sizes of the balls they wanted to shoot by dropping them through the bores of their shot tubes. If they passed through, they were fired. If they stuck, well, a huge influx of stuck steel balls in shots tubes was what got Daisy's attention in the first place.

Long story short, Daisy bought American Ball and started making their own steel air rifle shot. It was sized 0.171-0.173 inches, nominally. They had to change the size and design of their shot tubes to accommodate the new shot, and some time late in the 1920s BB began rebounding from hard targets with great force, something the soft lead balls had not done. This started the mothers of American warning against shooting your eye out.

Note: Although all steel BBs state .177 caliber/4.5mm, in reality they are not and never have been. That is why a regular .177 caliber lead ball will not work in BB guns. They're simply too big in diameter.

I've been trying to find a way around the use of steel BB's so I can protect the rifling. Got some Gamo lead BB's. They are actually pretty decent. But they won't go through a BB magazine (Crossman, et al). Gamo lead BB's are sized to take rifling marks. The Smart Shot is the same size as steel and do fit a BB magazine, except you need to understand that if your magazine requires a magnet to function, you will have issues - but they work. I like the Smart Shot.

As always, price. Smart Shot is more expensive. You need to decide if that additional cost is worth it to you.

The tins are snap on lids unless you get the bottle or the bubble wrap package. The bubble wrap is a screw on lid, and the bottle is a spout. Do some math. With Pyramid's 4 for 3 discount you can get the cost down to a penny and a half each depending on the packaging. Otherwise its 2 cents each. For occasional shooting, that's no big deal. For large volume shooting it adds up. And as others have said, try them out before you buy a larger amount. Some people don't like them but others, like me, really do.

Can shoot my air pistols without fear of of ricochets