The magic of the outside lock: Part 1

I said last time I would show you more of the details of the outside lock airgun in the next report, so let’s get started.

Gary Barnes made the gun a rifle, by boring a 36-inch long brass tube for .25 caliber and then rifling it with a left-hand twist. I don’t know the rate of the twist. He shaped the outside of the tube with 8 flats to resemble the octagon barrels of the past. But he left the breech portion round, so the barrel transitions from round to octagon, just like the finer makers used to do it.

He also made the gun a breakbarrel, which no originals were, as far as I know. The original guns were smoothbores that were in the great majority of what was being made at the time the outside lock was popular (1700-1775 — give or take a quarter century, either way — no one really knows). They were loaded from the muzzle with either close-fitting lead balls called bullets or else shot. But this gun would be shooting .25-caliber diabolo pellets and those don’t load from the muzzle! So it had to load from the breech.

Looking down on the top of the action and barrel we see the barrel lock. Swing that latch (arrow) to the left and the barrel opens for loading. 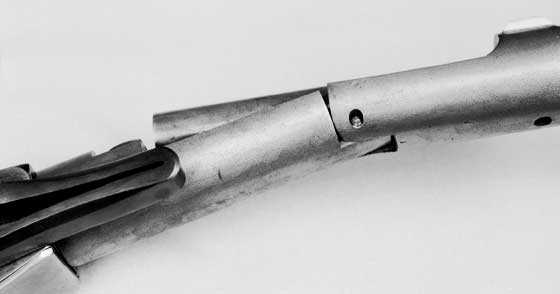 Looking from the underside, the barrel is now open for loading. It doesn’t open far.

Once the barrel is open you insert a pellet into the breech, but it doesn’t stop there. Gary made a custom breech-seating tool that forces the pellet into the bore by a certain amount. He made it from the tip of a discarded deer antler and it is a work of art by itself. It certainly belongs with the rifle. 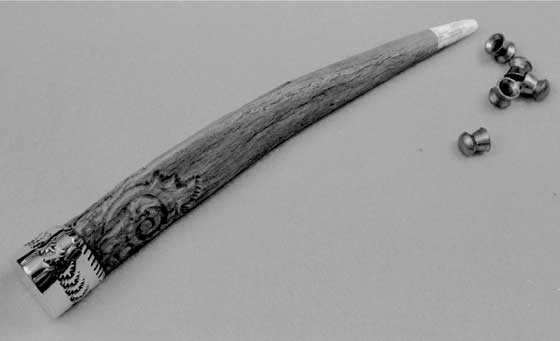 Gary Barnes also made this pellet loader from the tip of a discarded deer antler. It’s a work of art by itself and compliments the rifle.

You load the pellet first, then use the loader to push it deep into the breech. The white tip limits how deep it can go for consistent results.

When Gary delivered the rifle is came with a spare mainspring. He told me all the problems he had making the mainspring and then hardening it after it was shaped. In case you haven’t guessed yet, the reason the outside lock looks like it does is because most of the action parts are mounted to the outside of the lockplate, rather than being inside, where they are hidden. The mainspring has to be outside because there is no room for it under the lock.

Gary’s tale of the difficulties was so intriguing, in fact, that it inspired me to write a fictional short story about the making of the outside lock. I titled it The wind gun of Prostl, and it is now the last chapter in my book, BB Guns Remembered. I found it fascinating that an airgun made in 1730 could still be working (Gary had an original outside lock to examine) and even challenge a 20th century craftsman to recreate.

He was so concerned about the mainspring that he made a second one. The first one that came on the rifle was less powerful, so the rifle operated on a fill to just 600 psi. But after several dozen shots it did break like Gary had feared. He installed the second one and it operated all the time I owned the gun. As far as I know, it is still on the rifle today. This spring is more powerful than the first one and could operate with a fill pressure of 800 psi. 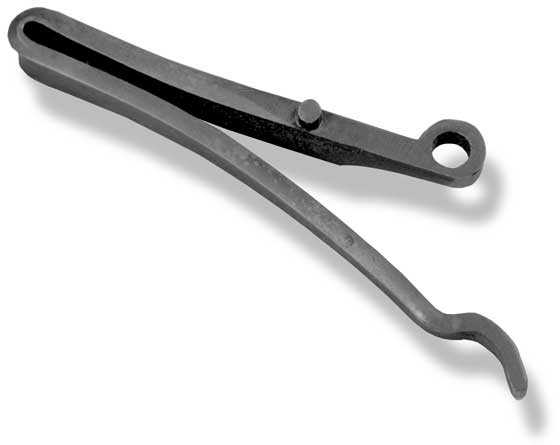 This is the replacement mainspring that was installed when the original broke. After shaping, all surfaces had to be polished smooth to eliminate any scratches that would be weak points. Then the entire spring was heated until it turned dark blue. It is now both hard and resilient, and may last for centuries. 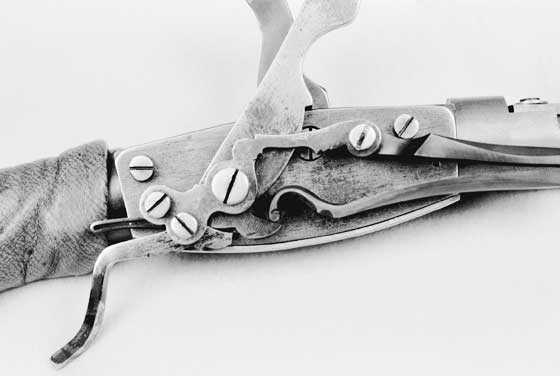 Here you can see the detail of the mainspring acting upon the hammer.

Now see how well the outside lock rifle works. It’s filled with air through a hidden port in the butt. Although the air pressure doesn’t go that high, Gary did make the reservoir from multiple tubes to provide a generous volume. This is hidden inside the leather-covered butt that looks like a homogenous container to most people. In the olden days when outside locks were being made the butt would be made from sheet iron, folded into a triangle butt shape and mechanically locked along the bottom seam that was then brazed along its entire length. A reservoir made this way would hold up to 800 psi of air, but not much more. Gary used seamless hydraulic tubing that will hold much higher pressures, though it won’t be asked to.

The first mainspring produced up to 22 foot-pounds of energy with a light .25-caliber pellet on just 600 psi of air. It got many shots, but it broke before it was thoroughly tested.

Here is a string of shots I got from a single fill.


As you see, the velocity did decline after shot 3, and I just kept shooting and recording until shot 12. I probably could have gone a couple shots more.

In ancient times the shooter would have no idea of what velocity he was getting, but he would develop a sense of greater or lesser power from each shot. They shot balls against metal plates to determine the relative force their guns were producing. I think getting 12 shots or even a third that number (depending on where you stop shooting) is very good for only 800 psi.

The trigger is weird, to say the least. You don’t pull it back — you pull it up to fire the gun! It’s a strange feeling that resembles a crossbow more than it does a gun.

I didn’t shoot the rifle for accuracy that much. It was more of a combined historical object and science experiment than a real pellet rifle. But the one time I did record a group I put 5 shots into 3/4-inch at 10 meters. That was shooting rested.

I let the outside lock go because as I have pointed out before, I can’t own them all. It’s one I wish I had back, but I’ve lost track of it, so I suppose it will live in someone else’s fantasy from now on. I’m glad I had a chance to get to know it when I did.