Today we test the accuracy of the Quackenbush Number 7 BB gun. I’m not expecting much from this gun, based on its light construction and age. But it surprised me in the velocity test we ran last Friday, so maybe I will be surprised yet again. I know you want a report of the 2016 Texas Airgun Show, and I will get to that tomorrow, so sit back and enjoy this oldie with me today.

I shot the gun at 5 meters, using the UTG monopod as a rest. I shot from the seated position, so the gun was about as steady as it could be. However, as light as it is (2 lbs. 9.25 oz) and with an almost 9 lb. trigger pull, it is going to be a challenge to get off a shot without some movement of the gun. It’s probably much easier to shoot it offhand, though nowhere near as accurate.

I used a 5-bull 10-meter rifle target and turned it sideways. I shot at the center bull on the first try, because if the BBs went wide I did not want to miss the trap altogether.

I shot all shots with a 6 o’clock hold. When I shouldered the gun the first time I realized the front blade is bent to the right. Someone has adjusted it in the past. That’s something little boys used to do to zero their sights.

First up was the Avanti Precision Ground Shot. Most of the BBs went to the left of the aim point, and the “group” was as large as I feared. It measures 3.123-inches between centers for 10 shots at 5 meters. 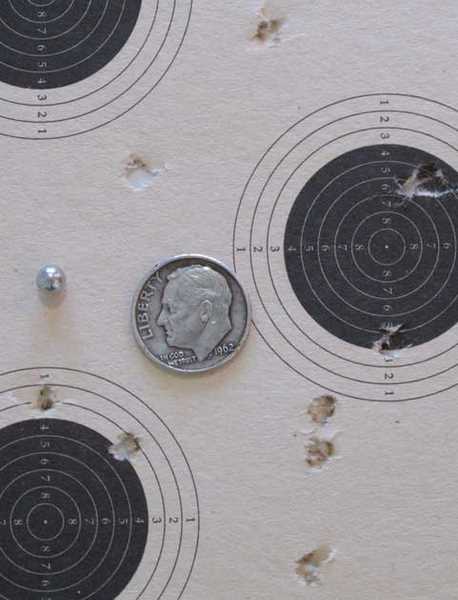 Ten Avanti Precision Ground Shot made this 3.123-inch group at 5 meters. I was holding at 6 o’clock on the bull at the right of the dime.

Next up were the copper-plated 4.4mm lead balls. The group tightened dramatically, to 1.868-inches for 10 shots. These BBs landed closer to the centerline, as well. I could hear they were going slower than the steel BBs, but when you are hitting the target, the speed of the projectile doesn’t matter as much. 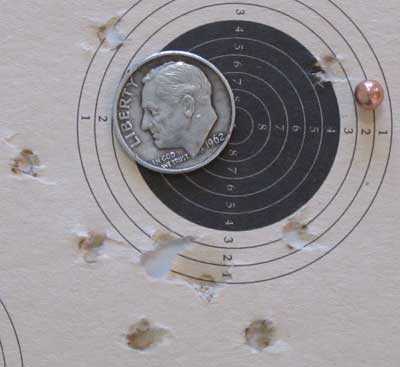 The last test was with those 4.55mm lead zimmerstutzen balls. I knew they fit the bore tight, but one of them actually refused to fire, so it was just too tight to pass through. And a second one went far slower than the others. On the other hand, this is the projectile that gave me the best accuracy, with 10 going into 1.144-inches at 5 meters. That’s pretty good! It makes me wonder whether a 0.175-inch lead BB might actually do even better. After all — that is the caliber the gun was made to shoot. 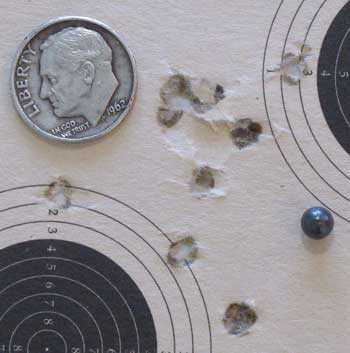 I said earlier that I thought the heavy trigger would present a problem when shooting this light gun, but it actually did not matter. The gun stayed steady despite the force needed to trip the trigger. So, I have no apology to offer.  These groups are about what you can expect from a gun like this.

That’s the test. It looks like my old Quackenbush BB gun is reliable and accurate enough.