Today I started accuracy testing the Galahad-rifle from Air Arms. There were some surprises, so you’re in for an interesting read!

I mounted a UTG 8-32 SWAT Mil Dot scope, using the high mounts that came with it. When I started sighting in the pellet was low and way left. I adjusted it up but it would not come anu further to the right. At 12 feet the pellet was hitting two inches to the left.

So I swapped the rings, thinking that if they were drilled off-center this would correct the problem. I also shimmed under the rear of the scope, to give me a little more vertical adjustment. Alas, the pellet did strike the target higher, but as for the left-right, nothing changed. That means the issue is with the Picatinny rail on the rifle. I needed to finish the test, so I calculated where I could aim at 25 yards and still have the pellet strike the pellet trap.

At 25 yards the impact was on line with the bull, but 8.5 inches to the left. That kept all the pellets in the trap so I could finish the test, but before I move to 50 yards I need to do something about the left-right adjustment. Obviously I will need an adjustable scope mount that has some serious left-right adjustment. But we can proceed with today’s test.

The first pellet I tried was the 18.13-grain JSB Exact Jumbo Heavy dome that Tyler Patner recommended for this rifle. I had the scope dialed up to 32X and because of the eyepiece adjiustment I was able to use my rifght eye for the test. The bull and aim point were in sharp focus for every shot.

The point of impact was out of my field of view at 25 yards, so once I confirmed the pellets were all going to a safe place, I stopped checking the group after each shot. When I finished I looked over and saw that 10 shots had gone into 0.30-inches. That’s pretty darn good! In fact, it’s world class! 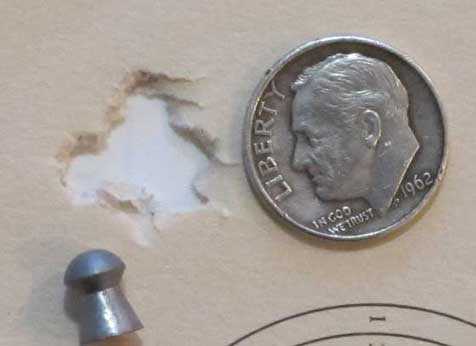 Remember the Galahad has a scope level at the rear of the receiver? Well, I could not even see it when I was shooting. The scope stuck back over it and covered it up completely, plus it is in the wrong place when my eye is concentrating on the target through the scope. So — nice feature but it doesn’t help.

Never forget that the Crosman Premier is also a top pellet that performs well in a great number of airguns. I used Premiers from the cardboard box that are unfortunately no longer available, but the pellets in the tins are still doing very well. I think Crosman had to make a business decision about the boxed .22 pellets, and since people don’t shoot field target or silhouette with .22s, there just weren’t enough buyers for the premium packaging.

The Galahad put 10 Premiers into 0.393-inches at 25 yards, which is another excellent result! The point of impact raised about an inch, but stayed 8.5 inches to the left. 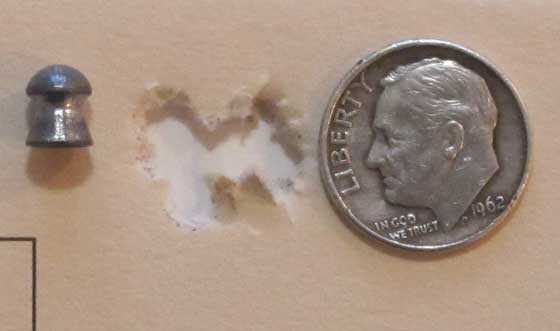 The Galahad put 10 Crosman Premiers into a group that measured 0.393-inches between centers at 25 yards!

By this point in the test I was starting to become familiar with the Galahad. I would like to raise the scope some when I remount it because the bullpup shape has me scrunched up on the stock right now. Also that trigger I liked before could now be a little lighter for me. I found my finger scraping the bottom of the triggerguard, which added to the pull weight, so I had to be careful to hold my finger in the center of the blade.

It might sound like I am being critical of the Galahad, but in fact it’s exactly the opposite. This rifle is so accurate and repeatable that I am finding my self adapting to it, rather than treating it like a generic test rifle. I’m just telling you what I’m doing to adapt better.

The last pellets I tried were H&N Baracuda Match pellets with 5.53mm heads. I hoped they would be the most accurate of all, but they weren’t. In fact they were the worst. I think at 50 yards I need to try the same pellet with a 5.50 mm head, instead. Worst, in the case of the Galahad, though, is a relative term. Ten Baracudas went into a 0.575-inch group. With most other air rifles we would call that fine! 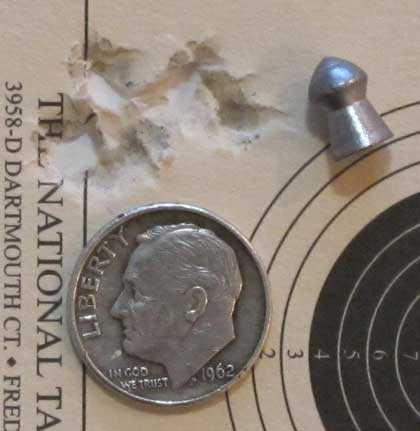 I called Gene Salvino of the Pyramyd Air technical department to ask him about the scope problem and he suggested I loosen the barrel clamp and see if the barrel is under sideways tension. Well, of course it was! I don’t know why I didn’t think of that myself — it’s such a common situation when there is a barrel clamp on a PCP or CO2 gun. The barrel is now centered, and Gene saved me the problem of finding an adjustable scope mount! I will leave today’s test as it stands, but now I am ready to go to 50 yards.

More on the scope

You may not remember it, but this is also a test of the UTG scope I mounted in the Galahad. This is a new scope I am testing for you, and I would like to mention that even with my bad eye, this scope adjusted perfectly so I could see the aim point sharply.  I notice that UTG scopes are getting clearer and sharper all the time. Now, the amount of improvement is very small because they don’t have much more to go, but they also all have etched glass reticles that enhances the sharpness. The reticle lines are very fine and crisp, and there is no longer any of the target being covered up by a heavy line. I’ll know more when we get to the 50-yard range.

Well, the scope adjustment problem threw me for a loop today, but thankfully I was able to complete the test and then I solved the problem by loosening two clamp screws and re-centering the barrel. I no longer need to remount the scope before I go out to 50 yards. And of course I am going to 50 yards. With accuracy like this I have to see what this rifle can do. Hopefully I will have better eyes when I run that test for you, though the UTG scope pulled me through today’s test just fine.

Given the consistency of the Galahad, I think it is a very serious choice for those looking for an accurate PCP. It has a great shot count and the most reliable and repeatable power adjustments I have ever seen. 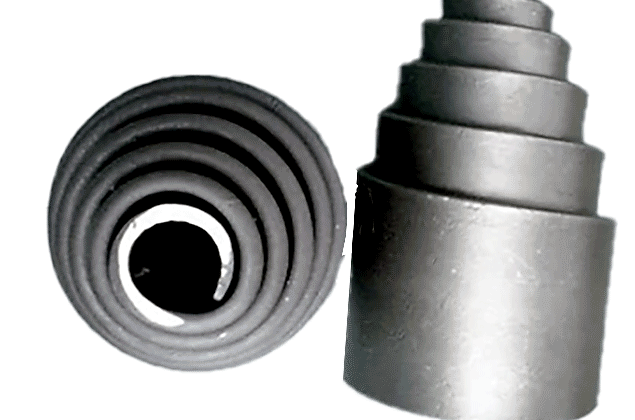 What about — springers?: Part 1