Some of you sharp-eyed veteran readers will remember that 4 years ago I reported on the El Gamo XP-68 breakbarrel carbine. Don’t worry. Except for a reference to that series now and then this will be an entirely new look at a different air rifle.

After writing that series, the shape of the futuristic XP-68 was fresh in my mind. One day not long after finishing that series I happened to see another one in a favorite local pawn shop. I already had one, so I knew I didn’t want another, but if the price was right, maybe I could buy it and sell it at an airgun show. So I asked to see it.

In many respects the new airgun was just like the one I tested and ultimately lube-tuned in the series, except for one small detail. This one was a .22! The XP-68 is already a rare airgun here in America, so I reckoned a .22 version was about as common as a Chevy Corvette with a 6-cylinder engine! Yes, they do exist, but find one.

And, what’s with the El in front of the Gamo name? That used to be the name of the company. Through the 1970s and into the ’80s they used the El. It was a time when the Casas family still owned the company and was proudly making air rifles. Just by knowing that small fact you can buy their airguns (they will all say El Gamo on them) with confidence, knowing that in their day both the late Robert Law of the now-defunct Air Rifle Headquarters and Robert Beeman who founded Beeman Precision Airguns, thought they were a quality European brand at an affordable price. The El Gamo 300 breakbarrel was highly touted by both men.

Back to the report

So, I found this air rifle in a pawn shop, but it was priced too high, and as I examined it I found the buttstock plastic shells were not held on tightly. The rear screw was turning freely because it was not anchored inside the plastic shell. I pointed that out to the shop owner and negotiated a lower price that was more acceptable. Soon I owned a .22 version of the rifle to which I had devoted more than half a year and 6 blog reports.

For years the new rifle sat in my office, daring me to begin working on it. I examined the plastic shells and discovered that all the pieces that were needed were still present. I could just Epoxy them back into position and the gun would be fixed. Or I could glue in a wood block in place of the plastic post to receive the loose screw. I pondered and pondered as the months and then the years slipped by. My life changed dramatically while the old air rifle sat patiently, waiting for my loving touch. 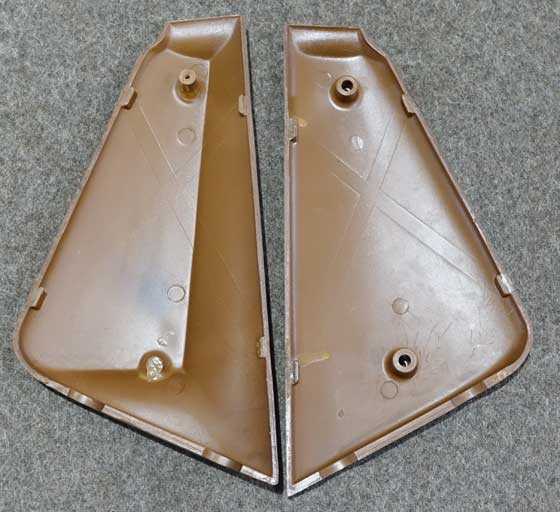 The two plastic shells that attach to the butt. The post that receives the rear screw (bottom left) has snapped off. 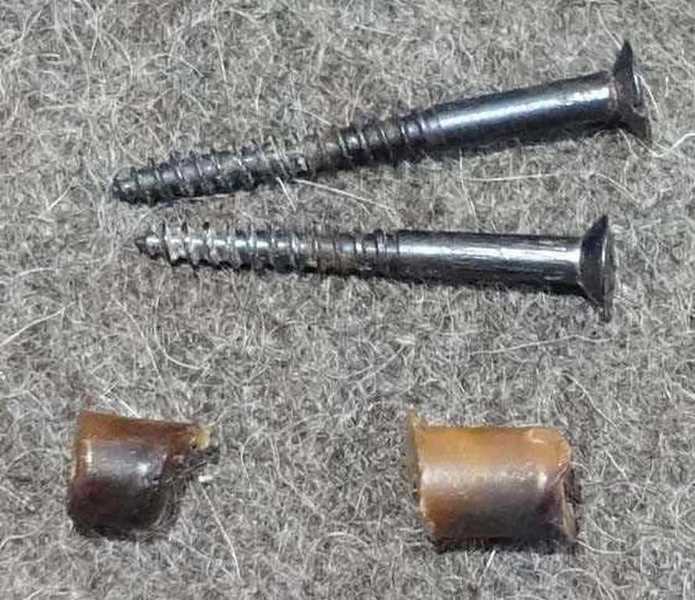 The two screws that hold the plastic stock shells together on the gun and the pieces of the rear post that snapped off.

The time is now

Then one day recently I realized that the time had come to do something, and here we go. Before I repair the stock, however, let me talk about the airgun.

Originally I thought the two rifles were identical, but upon closer examination I can see small differences. My .177 that I reviewed for you four years ago is serial number 767959. The .22 rifle that I got at the pawn shop is serial number 790440, which would make it the newer rifle by over 22,000 numbers. The condition isn’t as nice as the older .177, but it’s not a beater, either. Just a little more rust freckling that I will address with Ballistol and a stainless steel pot scrubbing pad.

I shot the rifle and the power seems okay. Of course I will need to check it through a chronograph before I can know for sure, but if the rifle needs attention I know of a 6-part blog where a guy took one apart and gave detailed disassembly instructions, plus pictures. I’ll just follow that and there shouldn’t be any problem.

The .177 shot Crosman Premier lites at an average 551 f.p.s., so I’m guessing this rifle will launch a .22-caliber RWS Hobby at about 425-450, or thereabouts. That would put it approximately in the Diana 25/27 class, which is fine with me. If it’s only shooting 375 I will probably do something about it. But parts like a fresh mainspring will be hard to find. So, I hope I don’t have to do that.

The differences between the two rifles are subtle. The bottom front of the triggerguard is less pointy on the .22, and the .177 has “mod. el gamo 68” marked on the left side of the base block, along with the serial number and caliber, where the .22 only has the serial and caliber. That’s all the difference I can see at this point, other than the older barrel being slightly thicker. I checked the trigger and it has the same adjustment screws which somebody has done a good job of adjusting. My .177 came to me with a very heavy pull, but this one feels lighter. 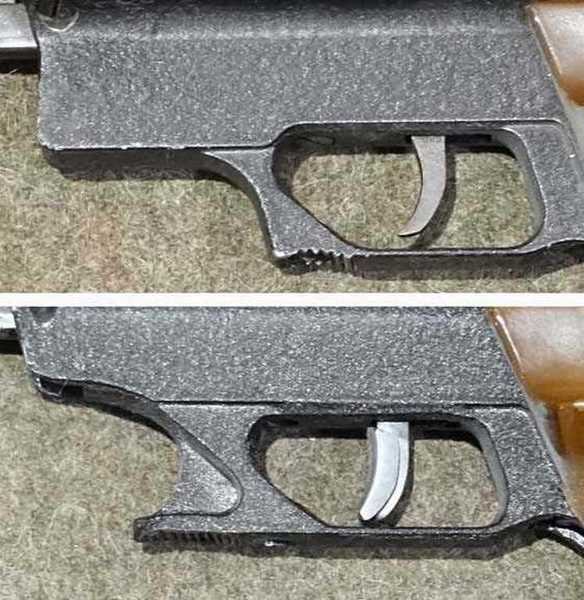 The newer triggerguard on the .22 rifle (top) has been simplified from the older one below. I added the trigger shoe to the .177.

Also, the action of the .22 is dead-smooth. So was the .177 I tested, so El Gamo got the powerplant right for this model. I used to think their model 300 rifle was the same action in a more conventional wood stock, but if you read that report you’ll see that it isn’t. They are similar, but not quite the same.

The next step will be to repair the plastic stock shell, so it will accept the rear screw that holds it to the butt. I will do that before testing the velocity. If I’m successful, I will move on to velocity testing. If I’m unsuccessful, I will make a different type of repair, but since the stock shell doesn’t have to be on the gun to shoot it, I will still move on to velocity testing as my next report.