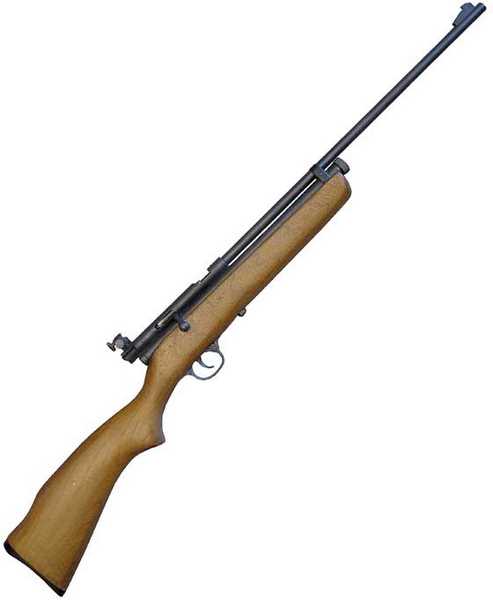 I was set to report on another vintage air rifle today, when yesterday I got a superb comment that prompted today’s report. Reader reallead was responding to a comment from reader Halfstep, who was wondering about the accuracy of his QB78. Let’s look at it now.

Halfstep,
Being the owner of a QB77 I’d like to add my comments. I bought my QB77 from MAC 1 in Calif. several years ago. According to the imprinted receiver, it was made (imported?) by Sportsman Airguns. Someone told me that QBs were actually made in Korea, but I don’t know for sure since I can’t find the country where it was made anywhere on the gun. [Editor — As far as I know, the QB air rifles were all made in The People’s Republic of China.]

My specimen has been a real shooter. On any of our hot summer Kansas afternoons when the temp. is anywhere between 90 and 100, it will shoot Crosman Premier Lights at 760-780 fps. (7.9 gr.). Advertised speed is 750. Of course, no complaints there.

Is it accurate? Well, from a sandbag rest and with a  fixed power 4x scope mounted and no wind, I have hit houseflies with it from a distance of 50-60 ft. Not when they’re flying of course, but when they land on my paper target downrange, they’re inviting targets. I missed most that I shot at, but did hit a few, and there is more of a thrill in that than hitting a paper bullseye.

I would suggest loading a pellet in the gun and then take a .177 cleaning rod (I’m assuming your gun is .177) and stick it in the muzzle and push the pellet back out, then check the pellet for gouges or deep marks that it picked up when it was pushed over the CO2 exhaust port during loading. If its gouged or marked, then the exhaust port probably has a burr, and thats probably the cause of the accuracy problem.

I think there are a couple large lessons in today’s report, and they are for the manufacturers as well as for individual airgunners. So, pay attention, because this really happened!

Like many things, this tale starts with somebody getting a great idea. The timefame was the late 1990s and the idea was this — what if a manufacturer could replicate the famous Crosman 160 air rifle? At that time airgunners were talking about the 160 in the same tones they reserve for guns like the TX200 Mark III today. In fact, if you look around, a lot of folks still regard the 160 as a special air rifle.

The Crosman 160 is an all-time classic pellet rifle.

The rifle existed in three variations, the last of which ran from 1960-1971, and was the best of all of them. That is the rifle I refer to when I mention the 160, because it has the upgraded crossbow trigger Crosman developed to their everlasting credit and the Williams S331 rear peep sight. To read more about the 160, read this three-part report.

The Crosman 160 was a single shot bolt action pellet rifle that used two CO2 cartridges. When it was launched, Crosman 12-gram cartridges were sealed with a bottlecap top that leaked badly. As many as 30-40 percent of them lost pressure after a year of sitting around. So imagine the public reaction to a rifle that needed two of these costly cartridges that were only partially reliable! 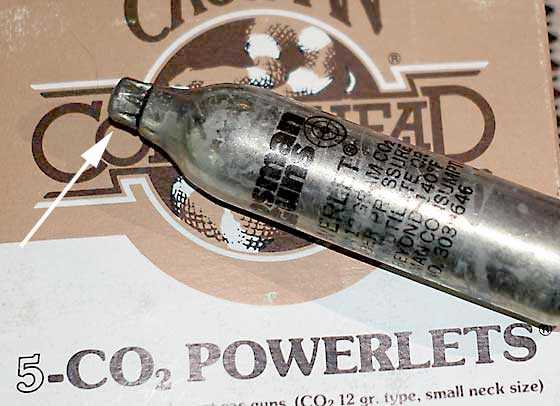 The first Crosman CO2 cartridges were capped with a “bottlecap” (arrow) that had a reputation for leaking.

The first 160 also had a simple and crude direct-sear trigger that was not so good. However, by the time they switched to the third variation in 1960, the rifle was so much better that the U.S. Air Force bought several hundred to use for marksmanship training. When the bottlecap went away and the CO2 cartridge was sealed properly, the 160 became a robust air rifle in all ways except one — pellets.

Pellets were the key

The 1960s were not a good time for airgun pellets. The choice for a U.S. shooter was either Benjamin or Crosman, and neither pellet was particularly good. That is what set us up for the discovery in the mid-1990s (with the introduction of the venerable Crosman Premier) that the 160 was really a red-hot target rifle. That is when it all came together for this model — about two decades after Crosman had ceased production!

Crosman “ashcan” pellets of the 1960s and ‘70s on the left; Crosman Premiers on the right. When the Premier hit the market, the 160 rifle came into its own!

And this is where the story gets interesting. Now, don’t hold me to the exact details because I am doing this from memory. But as I remember it, an airgunner by the name of Henry Harn thought it would be a good idea if the 160 could be manufactured again. He had contacts in China, so he approached Tim McMurray and had him build a 160 with the best of everything — a premium piece! Then Harn took that gun to China and found a manufacturer who agreed to manufacture it for him.

I remember seeing that first production gun, called the QB22, in Rick Willnecker’s shop that was located in Maryland at the time. I wanted one very much, but it wasn’t cheap! Harn was working with the Chinese to ensure the quality remained as high as possible. Before long there was also a .177 version of the rifle, called the QB77. We were publishing The Airgun Letter at the time and I wanted to report on this rifle, but money was very tight and I never got the chance. Before long the QB 22 and 77 were history, but were replaced by the QB78 — a version the Chinese factory made without Harn’s participation.

I was never privy to exactly what the business dealings were, but I knew right away that the QB78 was not made to the same standards as the QB22/77. It was far less expensive (one-third as much strikes a bell). They had several issues, the worst of which was a barrel that was all over the place in terms of quality. Get a good one and you had a good rifle. A poor one would ruin your day.

And that is the lesson today. I know many people think that a company like Crosman has a long and rich corporate memory — that they “remember” all the things they did back in the 1970s. But, in fact, “they” don’t. Through personnel changes over the years, “they” only remember as much as they are able to remember. Crosman does have a small museum that contains their vintage airguns, going all the way back. They also have a back room filled with guns they have examined over the decades, but the engineers that did those examinations may no longer work there.

They also had a huge corporate purge of back-room guns, parts and literature in the late 1990s that gutted their “memory.” I now own one of the repair manuals that once belonged to Rene Van derVeld — a name that’s well known to Crosman collectors, but probably to very few others. I got it and a several rifles in the Great Purge. Rick Willnecker got hundreds of guns and parts guns when that happened.

Former top Crosman engineer, Ed Schultz, is now working elsewhere, so there goes much of the corporate memory of the development of the Benjamin Discovery, the Marauder and the Challenger PCP — just to name a few key airguns.

Not picking on Crosman

It probably sounds like I am picking on Crosman, but let me assure you, I’m not doing that. They are still one of the most innovative airgun companies in the world today. The new Benjamin Wildfire and the Mayhem breakbarrel are ample proof of that! I could just as easily have said similar things about Daisy, except Daisy hasn’t brought out any really new designs of their own in decades. They do have a great museum, but I don’t think they have that many engineers developing new airguns these days.

The point is this — it doesn’t matter whether an airgun or anything else is made in China, Turkey, Korea or Burleson, Texas. What matters is who controls the quality of what’s being made. Cheap or expensive also doesn’t matter as much as some marketeers think. Yes, cheap sells in the box stores. You can work cheap into a formula that will always give you returns — until it doesn’t! Just ask Remington about eating millions of dollars worth of returned products that were so bad even the box store didn’t want them!

But the “cheap always sells” business plan also turns off millions of potential future customers, when the effects of cheap come home to roost. I am talking about the long game here. You risk the future of your entire product line for small gains today.

I’m also not saying that the QB78 is a bad air rifle. Far from it. In the early days the quality could be sketchy, but over the years the manufacturers have refined this product line and the manufacturing processes that produce it to the point that the air rifle is a solid buy today. And, it sells for about three times as much it sold for back then. Half of the increase is due to inflation, but the other half has gone into quality improvements.

“They ” can get it right, but “they” are not always who you think they are. Food for thought over the weekend!