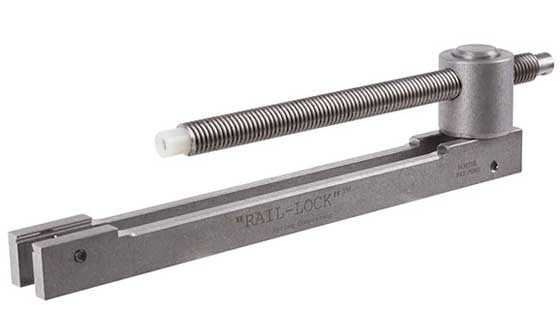 Today I start testing the new Air Venturi Rail Lock spring compressor. Many of you have expressed an interest in this tool, and I want to test it as broadly as possible, because all airguns are not made the same.

This compressor attaches to the scope rail on your airgun. It will work on both pistols and rifles — as long as there is a scope rail to attach to. It attaches to both 11mm dovetails and Weaver/Picatinney dovetails. The rails have to be close enough to the rear of the spring tube to allow the compressor to work, but that will become clear when you see the pictures.

I told you I bought a Beeman R8 from the Pyramyd Air table at the Findlay airgun show. I had planned to start testing the compressor on my Beeman R1, but the R8 has a threaded end cap just like the R1, and I have a special reason for wanting to look inside this rifle, so why not get a twofer?

The R8 is based on the old HW50S that is now obsolete. The current HW50S is a different spring rifle, though the size, power and many other characteristics remain the same.

You will notice no stock screws are showing on the side of the forearm. That’s because it has just a single screw located on the bottom of the forearm. 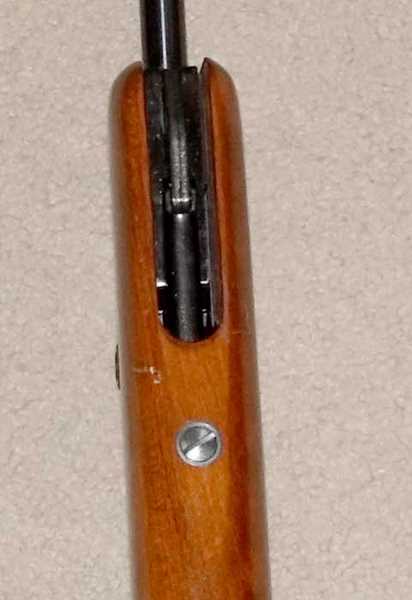 The R8 has just one forearm screw.

R8 out of the stock

Take out two triggerguard screws and one forearm screw and the barreled action comes out of the stock. Before the mainspring compressor can be attached, there is still some work to do. The unitized Rekord trigger has to come out.

Two pins must be punched out of the end cap. The trigger drops free and the safety and safety spring are also removed. 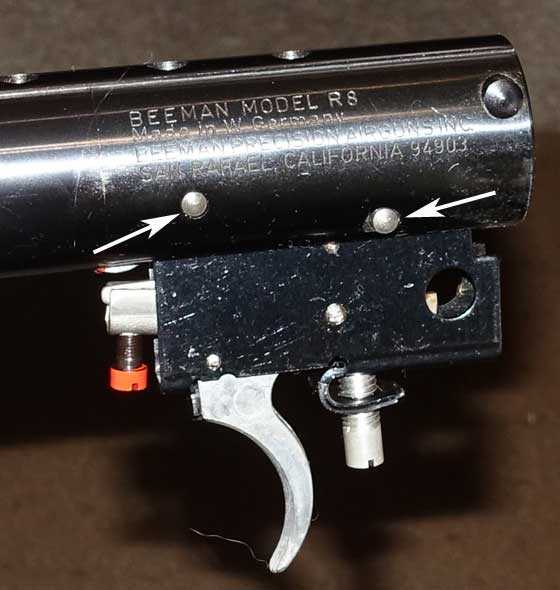 To remove the Rekord trigger, drift the two pins (arrows) out from left to right. The trigger will then come free.

Once the trigger was out there was no longer any doubt that the R8 has been at least lube-tuned in the past. Let me show you how I know. 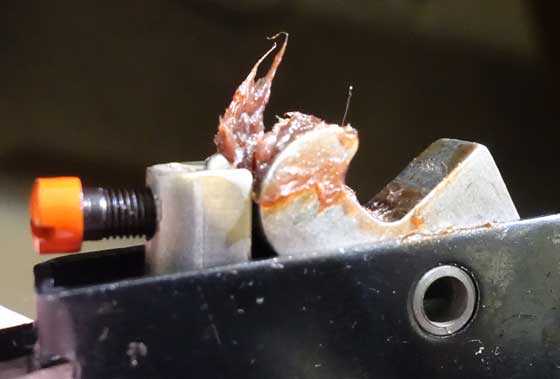 Doesn’t take a rocket scientist to know this gun has been lubed outside the factory!

Weihrauch never put that much grease near the trigger. The orange screw is also not standard. And this is not Weihrauch grease. It’s tackier and thicker, though not as thick as black tar.

The reason I chose the R8 is because of its threaded end cap. I thought that would be an interesting test of the Rail Lock Compressor, because the cap must turn while under pressure from the compressor. The white nylon tip of the compressor does not turn, and I wanted to find out how the R8 end cap would affect that. So first I unscrewed the end cap until only a few threads held it to the spring tube. 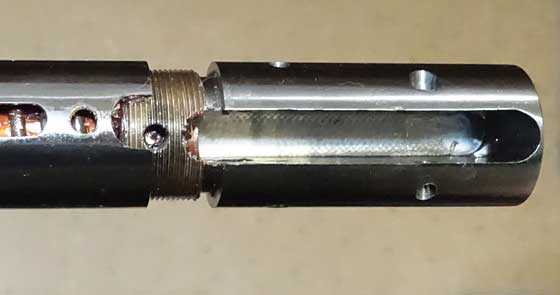 The end cap is unscrewed until just a few threads hold it.

Now the mainspring compressor was installed. Let’s review the parts of this tool. 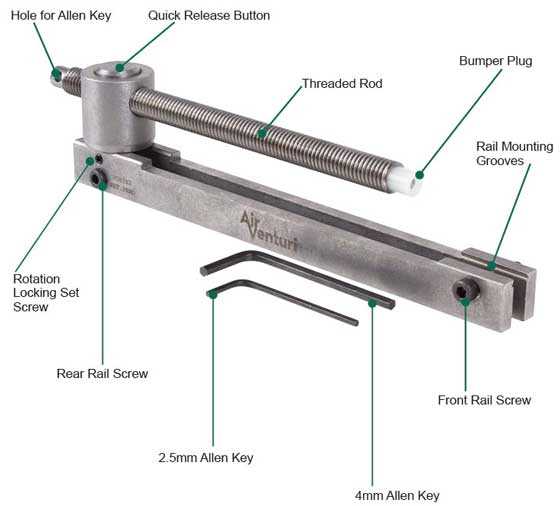 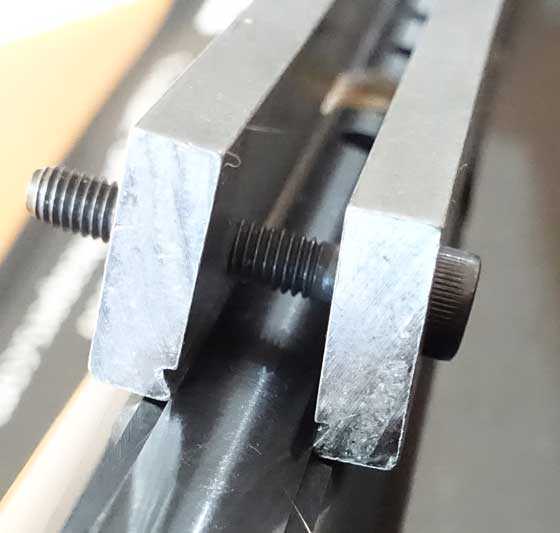 The compressor grooves fit the scope grooves on the spring tube. Just tighten the one screw and you’re done!

Once the compressor is attached, push the quick-release button and slide the threaded rod until the white nylon bushing touches the end cap.

Would the end cap pop off its last screw thread when it got there? Apparently I did it perfectly because I never saw or felt anything. The end cap was just free of the spring tube and still firmly retained by the threaded rod. The R8 mainspring is pushing against the end cap with 40-60 lbs. of force at this point. Let’s look at how much preload is on that spring.

The R8 mainspring is fully relaxed at this point. So, there is about 1.5-inches of preload on the mainspring. That’s what sticks out of the spring tube, added to the length of the end cap threads.

I’m not going to finish disassembling the R8 at this time. I want to test it as it is, then maybe retune it for you in the future. I know a better grease for the powerplant, and I should not have to use as much as the last guy did. How much did he use? Let’s see.

That’s a lot of grease! I can reduce this with better grease and still get the same smoothness (I’ll tell you about that on Monday). Perhaps I’ll pick up some velocity.

I know that you are curious how well the compressor works with the rifle going back together, so of course I did that, as well. This is where the manuals often tell you to “assemble in reverse order,” but you want to know if there are any surprises. So I did it. I won’t lie — getting those fine end cap threads to start in the spring tube was a challenge. But as I played with the compressor I saw that it wasn’t going to let the cap slip away, so I concentrated on aligning the end cap with the spring tube.

I found the Air Venturi Rail Lock Compressor easy to use. It worked very well, leaving both of my hands free to do other things if I needed them. Installation took a couple trials, but now that I know how to do it, this compressor will be quick to install. And there is a knack to learn for assembly, but that’s going to be specific to each type of airgun you work on. This will end up being a very large series! 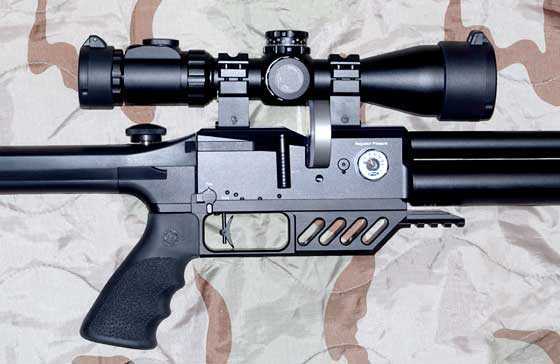