Here we go again. Today we will look at the shady side of collecting — the works of intentional deception. In some collecting fields fakes and counterfeits are so common that they have become a whole area of study within the field. Let’s look at the oldest of all — the counterfeiting of money.

Long ago it was more possible to counterfeit money because there were fewer ways of determining whether something was fake or real. It wasn’t until old Archimedes came up with a way of knowing how much gold was present in an object (Eureka!) that people had much of a chance of knowing what was real and what wasn’t. They learned to trust the money issued by certain governments (Rome) or kingdoms (Babylon) because those authorities made every effort to police their own money. The death penalty was usually the price for counterfeiting, because the authorities did not want the expense of policing the currency.

You have probably seen someone in an old movie biting a coin. Why did they do that? They were testing it to see whether it was real gold. Gold coins of the past had a higher gold content, which made them softer. If your teeth left a mark the coin was probably real gold — unless it wasn’! Allow me to demonstrate.

The U.S five dollar gold piece was a beautiful coin. The coronet head $5 gold coin had a run from 1839 to 1908. It was 21.6mm in diameter and was 90 percent gold and 10 percent copper (21.6 karat). It was a popular birthday gift from wealthy grandparents for many of those years. Let’s look at one.

This $5 gold piece from 1882 is in about uncirculated condition. Isn’t it beautiful?

In 1883 another gold coin hit the market. It looked similar to the one shown above, except the reverse just had a V on it. People understood the V was the Roman numeral five. So, this was the new $5 gold piece. Only it wasn’t! This 21.2mm coin was the new Liberty nickel, also called the V nickel. In the first year of coinage the mint didn’t see fit to put the word “cents” on the coin, just as they didn’t put it on the trime you saw yesterday. That opened the door for deception.

Looks good, doesn’t it? How many of these 1883 V nickels were plated with gold and passed off as $5 gold pieces?

You may be able to see many differences between the two coins because you are seeing them together, but remember, most people only saw a gold coin infrequently, and you would only see one at a time. This con can work — even today! The nickel was dubbed the racketeer nickel. Even though the mint let the coin ride for 1883, in 1884 they added the word “cents” on the reverse, under the wreath.

Coin collectors will tell you the story of the racketeer nickel story is apocryphal, but in 2001 an archaeological dig in Deadwood, South Dakota, uncovered a cache of just over 200 coins and gambling tokens. Among them was one of these racketeer nickels. So, at least one was passed around, and I believe a lot more of them were. After all, people are people! Interestingly, it wasn’t until 2016 that the actual identity of the coin in the find was established.

In my gun collection I have two Remington cap and ball revolvers that are both fakes, made to deceive. When Turner Kirkland of Dixie Gun Works first commissioned some Italian gun manufacturers to recreate replicas of famous guns of the past, the Remington cap and ball revolvers of the mid-19th century were among the first guns to be copied. He wanted accurate replicas that people could be proud of, so he asked the Italians not to mark the guns with their proofmarks and manufacturer’s marks in obvious places. Of course he didn’t want the guns to be passed off as real, either, so the original lettering was also left off. So much for good intentions! 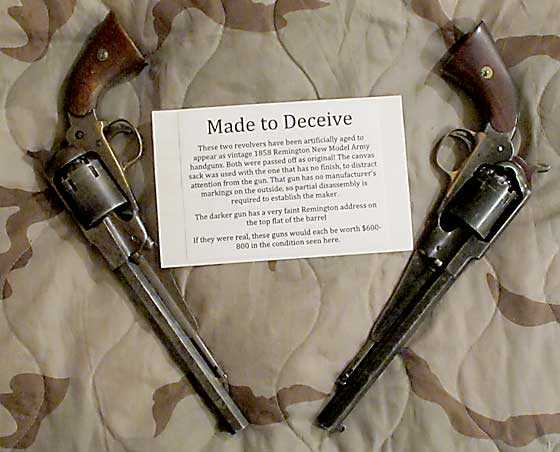 I put these two fake Remington cap and ball revolvers and the sign on my tables at gun shows. It sparks a lot of interest!

Dishonest people saw the possibilities right away and started “weathering” these replicas to make them appear a century older than they were. Then they began showing up at gun shows! Sometimes they had lettering added by the counterfeiters, but they never got the fonts correct, so the stories that accompanied the guns had to be convincing.

“I don’t know anything about it. It was my grandfather’s gun and I played with it when I was a kid. I wasn’t supposed to, but it was so darned neat I couldn’t resist!”

You see — he hasn’t told you anything that couldn’t be true. He hasn’t represented the gun as genuine. So, when he offers it at a substantial discount from what it should cost if correct, the hook is set and he reels in his catch.

I put these two revolvers on my table at gun shows and they attract a lot of attention. People want to know the stories that came with them. However, I am astounded when I am asked to sell one or both of them. That happens at least one time at every show. I have a sign next to the guns, telling people they are fakes, and these people still want to buy them! So, I put a price of $1,100 on the pair, which is how much they cost their original buyers who were duped. Then, all the interest dies away, leaving me to wonder what these potential buyers had in mind.

Now we come to the troubling part of this report. When are airguns faked and when are they just restored? Old airguns seldom command the prices that antique Colts and Winchesters do, so the motivation to fake them isn’t as great. And very few of the real antiques have been reproduced, though I am waiting for the day when the first wire stock Daisy reproduction hits the market as an antique. With an original worth $1,800 to $3,500, depending on condition, the potential is there.

Daisy made a faithful replica copy of their first wire stocked BB gun a few years ago and sold it for less than $500. Nowhere on the gun is there any hint that it’s not original. Since Daisy made it — it is a genuine Daisy, though not one made in the 1880s.

Even the lettering on this replica is reproduced by sand casting, giving a realistic look to the replica. Experienced collectors will notice that the sand they used to cast the replica part is too coarse.

There are a host of airguns that get refinished. Let’s look at the Crosman model 101 multi-pump. A shooter is probably worth $100-150 these days and one that has all its paint plus a gorgeous stock is probably worth $200 and more. So far, so good. Biut when the seller says the airgun is 100 percent original, beware!

Or when someone wants to sell you a Crosman 600 pistol that’s like new in the box, be suspicious. If it works and he wants less than $200 you can’t lose, but if he wants $350 because it’s so original, know that refinishing those old Crosman pistols is big business these days.

A Daisy Number 25 pump BB gun is nice to have, but there are a few around that accept bayonets — the same one that’s found on the Model 40 military rifle. The word that goes with these BB guns is Daisy was trying to recreate the 1897 Winchester trench shotgun, and the bayonet + attachment point on the gun is original. However, I haven’t see any mention of a 25 with bayonet in the reference books.

Mrs. Beeman’s custom FWB 124 rifle exists. I owned it once. I bought it from the lady who talked Mrs. Beeman out of it when the lady was ordering virtually the same thing from Beeman and found out this rifle had just been completed. Does the ownership make it worth a lot of money? I don’t think so. But the rifle is stocked with gorgeous figured walnut — the kind you sometimes see on a fine European firearm, and I think that’s where the additional value is.

However, when you are offered the personal Crosman 101 owned by William A. McLean (the man who developed the first Crosman multi pump pneumatic and took it to the Crosman brothers to manufacture), and the seller also claims to be the authenticator because his father bought it at McLean’s estate sale/auction, walk away! Sure, he only wants $3,000, but you walk — no, RUN!

I could go on and tell stories, but you get the gist of what I’m saying. Yes, collectible airguns are doctored, but be careful calling them fakes, as the intention may only have been to restore the gun. When enough time passes the gun and the restoration begin to merge. Then it will be harder to know what’s true.

Instead of the gun, I would focus on the seller and what he is saying. First of all, does he have a reputation? If it is a bad one, recognize that people usually earn those through shady dealings.

Next, look at what he is selling. Is it a BB gun once owned by president Kennedy, or is it a BB gun with documentation proving it was used in the movie A Christmas Story? The former is very difficult to prove and, even if it is true, it’s a Kennedy collectible, not a collectible airgun. The latter has some value, for obvious reasons.

Then, is the gun being sold on the basis of originality? I have seen Benjamin pellet pistols shined up like trumpets that were being sold as like new. A shiny brass finish on an old Benjamin means that two layers of original finish — black and nickel — have been stripped away.

Finally, and this can’t be overstated, airguns just don’t have the same collector cachet as firearms. A genuine Colt presented by writer Ned Buntline is worth a fortune. The one he gave to Bat Masterson, who allegedly cut the barrel down to 4-4/3-inches does not suffer from the modification. If it could be found it would be worth a fortune! Masterson is a genuine legend; the Buntline is legendary and any historical Colt is worth a lot.

Now, an FWB 124 once made for Toshiko Beeman, but which she never took possession of, is an entirely different story. First — who is Toshiko Beeman? Airgun collectors know her, but who outside our community knows her? Next, what is an FWB 124? Okay, it’s a very nice spring-piston rifle worth $400-600. Got a beautiful stock and a tune? Okay, add $1,200 That’s it! Don’t read in value where it doesn’t exist.