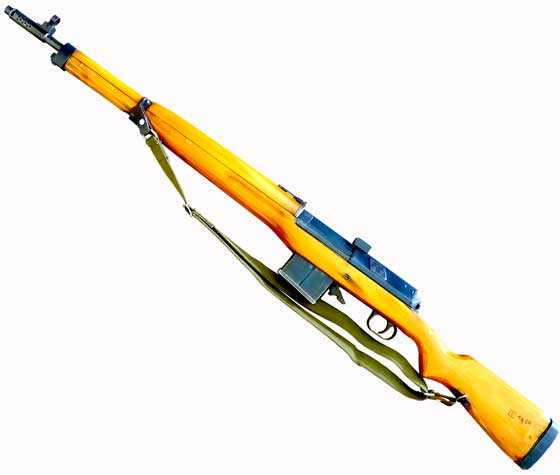 You have read about Hakims in this blog many times already, but all of them were air rifles. Today is different. Today we look at the firearm that inspired the pellet rifle trainer — the 8mm Egyptian Hakim!

At the end of WWII, the Egyptians found themselves in possession of tens of millions, if not hundreds of millions, of rounds of 7.92 X 57mm Mauser ammunition — the 8mm Mauser round. The Germans had stockpiled it in Egypt, thinking they would be there for a long time. When they left, there were storehouses of munitions left behind that the Egyptians inherited.

Of course there was no lack of K98 Mauser rifles to use this ammo. But one of the things that came out of WWII was the knowledge that the future belonged to the semiautomatic battle rifle. Every nation that didn’t have one, coveted one. The M1 Garand was at the top of the list, but the U.S. was still tightly wed to their rifle and, even though they had discharged millions of service members, they clung to those 5+ million Garands tightly, sharing them with just a few of their close allies. Egypt was not one of them.

The M1 Garand (below) is dwarfed by the Hakim.

So, the Egyptians went shopping for a semiautomatic of their own — one that could use their treasure chest of surplus ammo. They found one in Sweden, where the AG-42 Ljungman was just what they needed. The design was already proven, and chambered the 6.5 X 55mm Swedish Mauser cartridge. It is a very large and heavy rifle. Weight is around 10.5 lbs., depending on the wood, and the length is 48.5 inches.

The two cartridges were close enough in size that the Swedes were able to convert the action to the slightly longer German round. But the innovation didn’t end there!

The Egyptians wanted a way to adjust the action of their new rifle to accommodate cartridges of different power. They knew their stockpiles of ammo would eventually get used up, and when that happened they wanted to be able to buy surplus 8mm ammo from other countries around the world. The trouble was, it wasn’t all the same. The external dimensions were all the same (or so close it didn’t matter), but how it was loaded differed from country to country. Some was loaded very hot, while some was milder. They needed to find a way to adjust the rifle for every type of ammunition it was likely to encounter.

The Hakim action operates by what is called the direct impingement method. The high-pressure (45,000 psi and more) gas from the cartridge is bled off from the barrel and enters a tube that directs it back to hit the bolt carrier. The M16 and AR-15 use a similar process. The Egyptians installed a variable gas port in their design that the Swedish rifle didn’t have. The user can change the amount of gas flow and adjust the rifle to operate on most 8mm cartridges — theoretically. It works, but with the advancement in powders, it doesn’t have the range needed to adapt to all 8mm ammo today. Hakims can be plagued by stuck cartridges, when their rims are torn off by a bolt that’s too energetic. They also suffer from broken extractors for the same reason.

The control for the port is located on top of the upper handguard. Presumably soldiers were issued a tool to adjust the port and just as presumably they lost them right away. 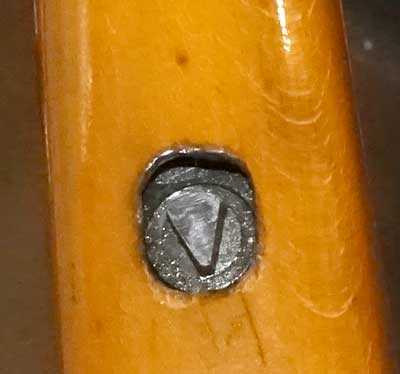 Rotated down (pointing toward the butt) the Hakim gas port is wide open for lower pressure cartridges. 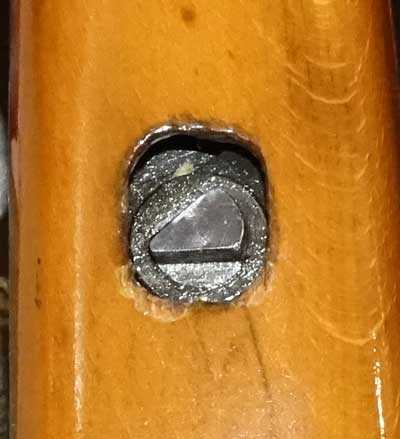 Rotated this way as far as it will go, the Hakim gas port is closed and the bolt has to be cycled by hand. But then the rifle will kick harder, because the action doesn’t move and absorb some of the recoil.

Anyone who has shot next to someone with a semiautomatic rifle knows the hazard of the ejecting brass. It’s hot, flies hard and if you are hit you won’t forget it. The Hakim fixed that by throwing the spent brass forward! They do that with a brass deflector that’s mounted on the right side of the sliding bolt cover. People think it is the handle for operating the cover but it’s really the brass deflector. It’s a wonderful feature for a battle rifle and horrible news for a reloader. 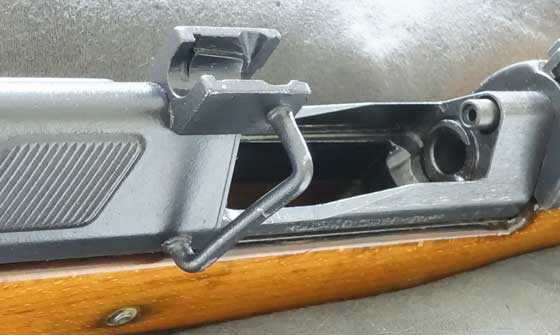 That wire bar is the cartridge deflector. It kicks the spent case 25-40 feet in front of the shooter. You can see the gas tube above the chamber. Those ridges on the cover are to hold cover when cocking the rifle. 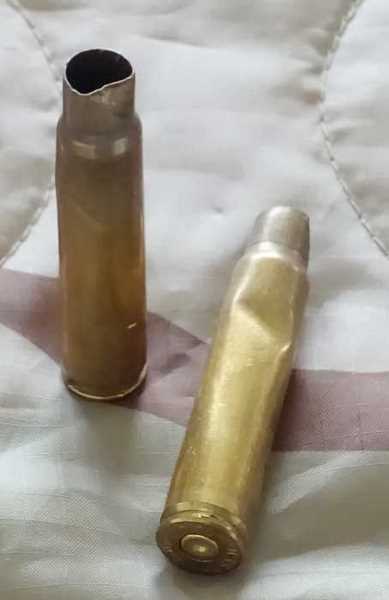 The Hakim damages spent brass too much to reload. The case neck can be straightened, but the dent in the case wall will not come out.

The brass gets dented by the deflector too deeply to be reloaded. Other semiautomatic battle rifles have similar cartridge “problems” for the reloader, like the German G3’s fluted chamber that also distorts the brass. The military doesn’t think about reloading, so these things don’t bother them, and speaking from experience, I would rather have the rifles do what they do than worry about reloadable brass. I’m just mentioning it.

The Hakim action has to be experienced to be believed. At first glance it seems to work backwards. Normally we think of pulling the bolt to the rear to load a semiautomatic rifle. With the Hakim, you slide the bolt cover forward until it catches the bolt, then slide it back to open the bolt. The 10-round box magazine is removable, but it’s not designed to be removed in normal operation. The mag remains in the rifle and gets loaded with two 5-round stripper clips that fit into a guide on the top of the bolt cover. It takes longer to explain than to do.

When the rifle is fired, or when it is cocked and loaded, the bolt is forward and the bolt cover is to the rear like this.

To cock the rifle, slide the bolt cover forward.

Then slide the bolt cover to the rear. It will bring the bolt with it. Notice there is a place in the lug above the cartridge deflector to insert a 5-round stripper clip. The bolt cover is not all the way back in this picture, because that releases the bolt to spring forward.

When loading the rifle you must take care not to release the bolt while your fingers are in the way. An M1 thumb is nothing compared to what this beartrap will do to you!

The Hakim is very accurate. It’s almost a legend. Only the Swiss K31 can rival it. It may be the poor man’s Garand, but head to head, the Hakim will outshoot the American rifle, unless the latter has been accurized.

The Hakim’s greatest downfall is — it was designed in Sweden, by Swedish engineers. It’s perfect for a forested/tundra sub-arctic environment. It even works well in a temperate climate. The tolerances between all the parts are very tight, as you would expect in a Swedish firearm. But tight tolerances don’t work so well in the desert.

In the field, the Hakim gave soldiers fits! They had to keep it dry and scrupulously clean or it would jam. Does that ring any bells? Like perhaps what happened in Vietnam with our own M16 in the early days? Of course we were also fighting the development curve of new military ammunition. The Hakim uses a cartridge that had been battle-tested for more than half a century.

This was where the American Garand, while giving up some native accuracy, stood head-and-shoulders ahead of the Hakim. In the reliability department, the Garand won, hands-down. Of course the M1 had also been through its own teething problems in the late ’30s and early ‘40s, but with over 5 million made there was ample time and money to develop the design.

In sharp contrast, only seventy-some thousand Hakims (sources say 70,000 to 79,000) were ever produced. There wasn’t a world war to equip in 1954, so there was no motivation to build more rifles. Hence the rifle did not get the same attention as the Garand. They were produced from 1954 to 1959 at the Maadi arsenal.

When the 1960s arrived, the Egyptians redesigned the Hakim into a much smaller carbine-sized rifle they called the Rasheed. While the design was largely retained, the Rasheed was chambered in 7.62 X 39mm — a cartridge used by the Soviet Bloc, and therefore also available in great numbers. The Hakim went through the Egyptian military hierarchy (national guard and special units) and then was surplussed. Many made their way to the gun-friendly United States.

Why is the Hakim the “poor man’s Garand”?

Hakims have always been priced less than Garands. Even today a Hakim in excellent condition (and many are) will fetch $900, where an average-condition Garand brings a thousand or more. But it isn’t the price of the gun that earned the Hakim its title. It’s the ammo.

Eight-millimeter Mauser ammo has been dirt-cheap on the world market for half a century. Like Russian 7.62 X 54R and the American 30.06 and 5.56mm rounds, the going price of 8mm Mauser ammo was reason enough to buy a rifle. That’s not as true today, though existing stocks are still keeping the price low. So, the price of the ammo and not the rifle made the Hakim so attractive.

Unfortunately, most military 8mm Mauser ammo is corrosive. Therefore most of the Hakims you find have corroded bores from improper cleaning. To clean a rifle barrel that has shot corrosive ammo the solvent has to contain some water. Military rifle bore cleaners do contain water and will clean a bore that has shot corrosive ammo. But most commercial bore cleaners don’t contain water, and, if they are used, the bore will rust.

If the firearm is scarce, the Hakim airgun is positively rare! Made by Anschütz in 1954 and ’55, only 2,800 are thought to have been produced. They were surplussed by the Egyptians in the 1980s and Navy Arms brought many of them into this country. I remember buying them for as little as $60 and I complained when I had to pay $100 apiece for two. Today a shooter is a $300 air rifle and a nice one, of which there aren’t many, goes for more.

I have written a lot about the air rifle. You can read that here.

I hope you have enjoyed today’s little history lesson. I find this rifle fascinating, not so much for how it is designed, but for the reasons it was made the way it was.