This is Part 11 of the Hiveseeker guest blog. I had to break this report into two parts, the first of which ran yesterday. Today is a continuation of that report.

We already discussed the 24 inch barrel, so now we are ready to dive into some numbers! I’ve summarized this data in the table below. This split table is slightly redundant. First, I want to show you the velocity increase compared to the shortest 7.5 inch baseline barrel. As we mentioned before, the average velocity increased by a total of 153 f.p.s. from the 7.5 inch barrel up to the 24 inch barrel, a difference in length of 16.5 inches.

The second part of this table shows the velocity increase compared to the previous barrel length. In other words, this is what you can expect in velocity gains if you swap your existing barrel for one of the longer barrels. The increase is additive — if you’re jumping from a 10.1 inch barrel up to an 18 inch barrel then your total velocity increase should be about 43 f.p.s. (that’s 28 f.p.s. increase for going from 10.1 to 14.6-inches and another 15 f.p.s. for going from 14.6 to 18-inches).

In this part of the table you can also see that the 7.5 inch barrel increases the velocity spread at the low end by a negative 51 f.p.s. (it decreases the overall velocity by that amount), and the 24 inch barrel adds 59 f.p.s. at the high end. As we discussed earlier, these two extreme barrels account for a full two-thirds of the total velocity spread.

This next table is also slightly repetitive, but specifically addresses a topic that I found to be widely discussed in the modding forums: Velocity increase per inch of barrel length increase. As you can see in the orange column on the table below, this varies. However, except for the increase from the 7.5 inch barrel that was 20 fps per inch — the increase varied between only 9 and 11 f.p.s. per inch. The number I saw mentioned most in these forum discussions was a velocity increase of about 10 f.p.s. per inch of barrel length increase, and, except for the 7.5 inch barrel, that is entirely correct.

The last column above simply shows velocity per inch of barrel length. This entire blog has shown us that velocity increases with barrel length in a CO2 gun, but you can see here that the amount of velocity gain dwindles steadily as the barrel grows longer. This is due to increasing friction on the pellet as it passes through longer and longer barrels. The graph of this data (below) shows a consistent — but decreasing — velocity gain as barrel length increases. 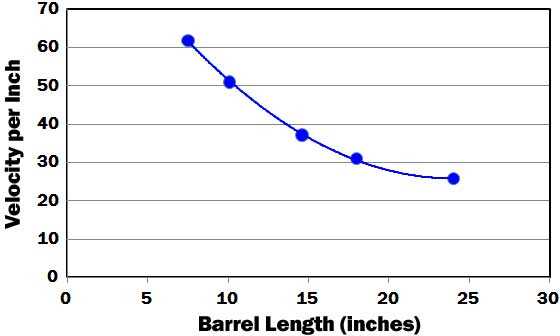 Although we already know that velocity increases with longer barrels, the amount of this increase declines with barrel length, as you can see by the downward sloping line. The longer the barrel, the lower the velocity per inch. Friction on the pellet begins to overcome the advantage provided by a longer barrel.

So, if the velocity gain declines as the barrel gets longer, how fast and how far can you go? The graph below plots our simplest data from the tables above — the average velocity for each barrel length. A polynomial line-of-best-fit projection of this data shows that velocity will theoretically increase until it reaches 725 f.p.s. at a barrel length of 57 inches, marked by the arrow. At this point barrel friction on the pellet overcomes the velocity increase provided by a longer barrel, and velocity actually begins to decline. 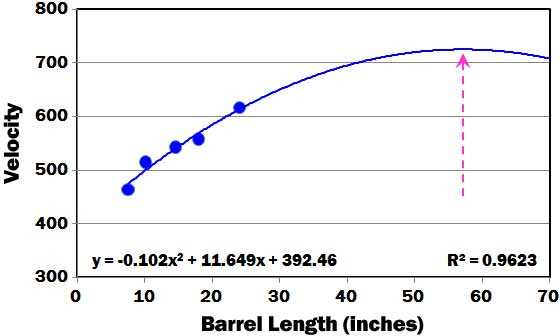 A theoretical projection of our data shows that velocity should increase until it reaches 725 f.p.s. at a barrel length of 57 inches (arrow). I’ve provided the equation for those that like math more than I do! The correlation (R2) of 0.9623 approaches a perfect 1.0, showing a very consistent relationship between barrel length and velocity.

[Editor’s note: You won’t find any barrel maker who will or even can rifle a 57-inch barrel today. While it is still possible to do, 150 years ago when barrels were made by hand and rifling machines were constructed with long barrels in mind, it was even more possible. There simply is no demand for rifle barrels that long today. Modern rifling machines are designed to accommodate barrels of certain lengths and no longer. The longest barrels you will easily find today will be around 29-30 inches. That doesn’t include black powder barrels, but their twist rates are often very slow.]

I wanted to complete this data package with a full shot string reference table that I hope modders and other shooters will find useful. Note that I had stopped each test when velocity dropped below 400 f.p.s., where I found that accuracy fell off. For that reason, the 31-40 shot strings in the table below do not report a 10-shot average, but list the number of shots in that string and the minimum and maximum velocity I got when each barrel dropped below 400 fps. For example, the 10.1 inch barrel only had 3 shots in that string, ranging from 384 to 417 f.p.s. (Of course, 384 f.p.s. was the last shot.) I felt that this would be more accurate than reporting an incomplete average that did not include a full 10 shots. 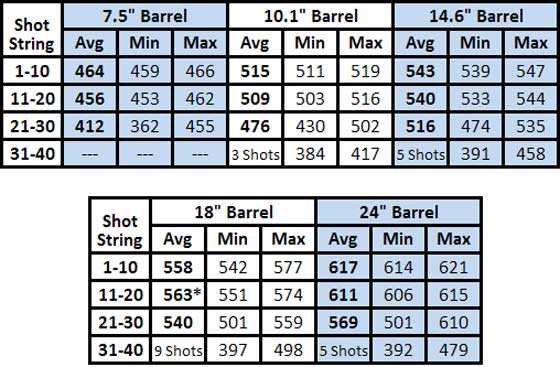 *Note that the HiveSeeker II with 18 inch barrel exhibited a slow velocity increase, resulting in the second 10-shot string actually being slightly faster than the first. 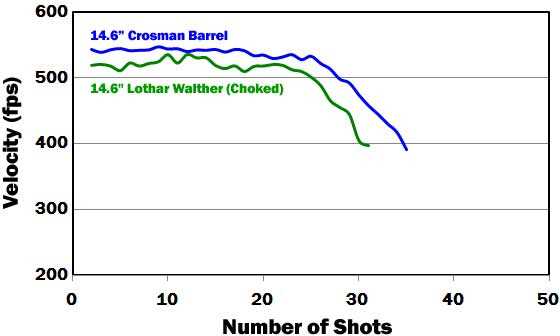 The bottom line for this blog is that I discovered barrel length can make a much bigger difference in CO2 velocity than I had imagined: Up to 153 f.p.s. if you include the very short and very long barrels I tested. Combined with the Custom Shop power valve — which can add an additional 90 f.p.s. — it’s easy to see how my 2400KT in .22 was shooting just as fast as my 2400KT in .177. It’s taken some experimentation and time to fully answer that question, but I think we’ve learned a lot along the way! We’ve thrown a lot of numbers around yesterday and today, but don’t forget that the ultimate goal in understanding more about a gun is to better appreciate and enjoy it — to have fun!

What’s left? Well, in my final blog installment I finally break down and try a little modding! Don’t expect a full discourse on what can be done with the amazing Crosman CO2 guns, but I’ll be giving a brief introduction to most of the basic mods for these guns and what results I got when I tried them. See you in Part 12!