Today’s report is the continuation of a guest blog from reader HiveSeeker about his Crosman 2400KT rifles.

The 2400KT CO2 Carbine is available exclusively from the Crosman Custom Shop.

Velocity:  .177 caliber
Finally — let’s settle down to a serious velocity discussion! I tested a wide range of different-weight pellets to get a good cross-section of the Crosman 2400KT’s performance. The 2400KT .177 generated an average of 569 f.p.s. with the .177 boxed Crosman Premier Lights, B.B.’s favorite all-around, typical .177 pellet. [Note: I obtained these pellets after completing the shots-per-fill testing with the Crosman Premier Hollowpoint hunting pellets, which was the closest match I had at that time.]

Pistol velocities ranged from a high of 655 fps with the 4.0-grain alloy Crosman SSP, down to 509 fps with the 10.5-grain Crosman Premier Ultra Magnum heavy. I chronoed a lot of pellets; so instead of discussing the velocities in text, let’s look at the complete velocity table:

.177 pellets I tested
Below are some comments on the individual pellets. I won’t repeat all the specific velocity data since that’s already available in the table above. 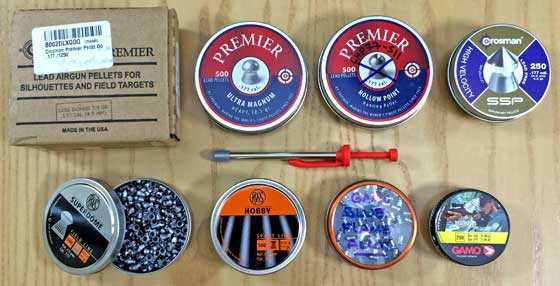 A wide range of pellets were tested to obtain a good cross-section of data for the .177 Sassy Sandy 2400KT.

Crosman SSP: This lightest alloy pellet gave the highest velocity (655 fps), as would be expected. It was loud — but not as loud as the same pellet in .22.

Gamo PBA Blue Flame: The Gamo PBA Blue Flame alloy pellet was by far the tightest of any I tested in either caliber! I’m sure part of the reason is that when chambered, the hard alloy is not engraved by the rifling as easily as lead. I shot 10 pellets, got my velocity average, and will probably not be feeding these to my 2400KT ever again. Blue Flame pellets also gave the widest spread of any other .177 pellet, at 28 fps — high for a CO2 gun, and a possible predictor of poor accuracy.

RWS Hobby: Another preferred pellet of B.B.’s, the RWS Hobby was a little tight and was also louder than any other .177 pellet in the 2400KT.

Crosman Premier Light: The fit of this favorite of B.B.’s was a little tight. My first experience with these cardboard-box pellets is that they do not travel well in large numbers. There were a lot of damaged skirts, and I had to choose carefully to make sure I was getting valid velocity and accuracy data.

RWS Superdome: Despite weighing slightly more, the RWS Superdome had the same velocity as the Crosman Premier Hollow Point. We’ll see similar above-par performance from its .22 big brother. This pellet fit a little tightly and had the second-widest spread of the .177 pellets — at 24 fps.

The Crosman 2400KT generates .177 velocities in a very stable range reminiscent of its near relatives, the Crosman 2300T and the 2300S target pistols. My only other general comment on the .177 velocities is that I expected the velocity spreads to be generally smaller based on the very smooth velocity line we saw in the shots-per-fill graph in Part 3. Consistent CO2 regulation and pellet velocity are prerequisites for dependable accuracy, so it’ll be interesting to see if the pellets with the smallest velocity spreads also tend to be the most accurate.

What’s going on with the .177?
You’ve already seen from the shots-per-fill graphs and a couple preliminary velocity numbers that the HiveSeeker .22 is getting the same velocity as the Sassy Sandy .177. I know of no other pellet gun that has the same velocity with .177 pellets as .22 pellets! 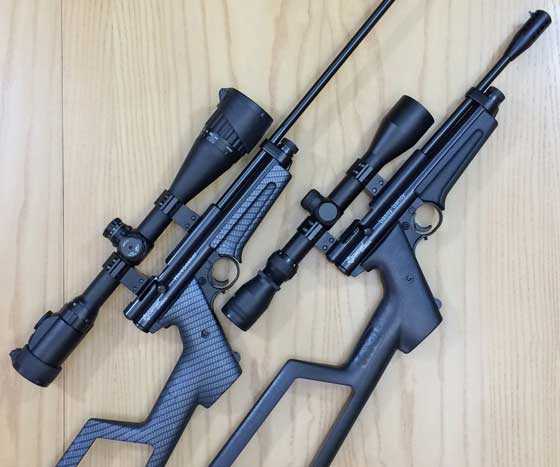 Compare the spring-piston Browning 800 Express. B.B. got 651 fps from this pistol using an average-weight .177 lead pellet, the 7.56-grain Gamo Match. His good friend Earl “Mac” McDonald tested the .22 version of the Express and got 441 fps with typical 14.3-grain Crosman Premiers. That is exactly what I expect from .177 and .22 pellets shot from the same powerplant — a very wide velocity spread (in this case, more than 200 fps) in favor of the much lighter .177.

This makes something seem wrong with the .177 2400KT — at first. But I don’t think I’m giving Crosman too much credit when I say that’s exactly what they intended. I repeatedly contacted Crosman with questions about this velocity disparity. Though their customer service was excellent in every other regard, they’re universally mum on Custom Shop gun velocities. So, hang on while we detour slightly, and then we’ll get back on track with a possible answer.

When B.B. tested the adjustable-velocity 2300S pistol, he got the best accuracy when he dialed the power setting all the way up to full power. Crosman specs state that this will provide a velocity of 520 fps. That is exactly the same velocity B.B. got from the 2300T target pistol with 7.9-grain Crosman Premier Lights.

The 2400KT carbine shoots somewhat higher than that, at 569 fps with the same Premier Lights — and the high 500s just so happens to be where a lot of Olympic rifles shoot. Where am I going with all this? I think that when the Crosman Custom Shop builds a .177 pistol, it builds a .177 target pistol. A pistol with deliberately stepped-down — and more ballistically stable and accurate — velocity that approaches that of their high-end target and silhouette pistols.

And that’s what I think might be going on with the .177-caliber 2400KT. I don’t know if selecting the 10.1-inch Lothar Walther match barrel was a factor in the assembly line velocity reduction, but the bottom line is still the same. If you’re punching paper, go with the .177 — and I do recommend the Lothar Walther barrel if you can swing it. If you’re after fur and feathers, the .22 is the obvious choice — but it certainly won’t disappoint on paper either, as we will see.

Can you help?
As we wrap up Part 4, I remain curious about the lower .177 velocities in the 2400KT. Information from a range of online sources was inconsistent. Stock velocity data was rare compared to modded velocity figures — a lot of shooters seem to be interested in how fast they can go without worrying about where they started. A longer barrel clearly produces more velocity — and that’s an admitted advantage of the HiveSeeker .22 that we’ll address later — but few of the stock .177 velocities I tracked down suggest that this caliber takes full advantage of the 2400KT’s potential.

If you have a stock (yes, stock!) 2400 in .177, I’m inviting you to post your maximum velocities for comparison and discussion. Please be sure to mention barrel length and pellet weight. If I prompt you to actually run outside and chrono your gun, then I’ll also request that you please use a 7.9-grain or similar-weight pellet if possible, for a more consistent comparison. Please do the same with your stock .22 2400s and 14.3-grain pellets for comparison, as well. Thanks in advance, and see you in Part 5!