Today I will try a different kind of rubber in the Johnson Indoor Target Gun. Several readers who are more knowledgeable than me about slingshots recommended I try Theraband Gold. It is one of the types of elastic that’s favored by catapult users and makers around the world. I watched a You Tube video of the Slingshot Channel titled, The BIGGEST slingshot EVER. The builder uses Theraband Gold to launch a bowling ball into a Mercedes car repeatedly, destroying it.

I bought 6 feet of Thereband gold rubber on Ebay, a rotary cutter to make clean cuts and a cutting mat for this project. I used the data from Part 3 of this report as my starting point, simply because there was nothing else to use. Maybe someone has done what I am about to do before, but I have never seen it in print.

The rotary cutter is to cut the Theraband material cleanly.

Right off I noticed that the cutter had a mind of its own. I should have used a seamstress’s plastic cutting guide, but I have already spent a lot of money and I wanted to get on with this test. I needed it quick and dirty and that’s how I got it.

Here is the band I made to shoot. As you can see, I got sloppy in the cutting. I will explain why in the text.

Once I figured out that I wasn’t going to cut the band straight, I gave up and cut it freehand. I wasn’t looking for a final solution. All I wanted was to see if this was even possible. So any band I made would not be used in a final test. I just wanted to see if this worked.

It worked — sort of

Well, it worked, and then again, it didn’t, I installed the band and shot the gun but it was extremely weak. Cocking was normal and the launcher caught the band when it went forward, but I didn’t bother to chronograph the shot because it was way below what we have seen. As a guess it was in the 50-60 f.p.s. range. 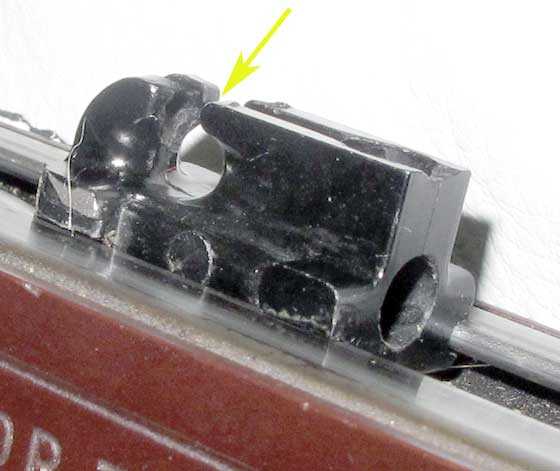 The band has to fit inside the groove in the launcher (arrow) or it won’t work.

Well one band wasn’t going to do anything, so I wondered about multiple bands. They would be more powerful, but there would be a problem. The rubber band has to fit into the groove that’s in the launcher in order for the gun to work. Surgical rubber tubing is great because it fits into the groove very well when it’s stretched, but a flat band like the Theraband has to be stretched very thin to fit in. If it’s not all the way in, it can slip out on firing or even when the gun is just cocked and left alone.

Nevertheless, I wanted to know, so I cut three bands of equal length and made a loop at each end of all three. 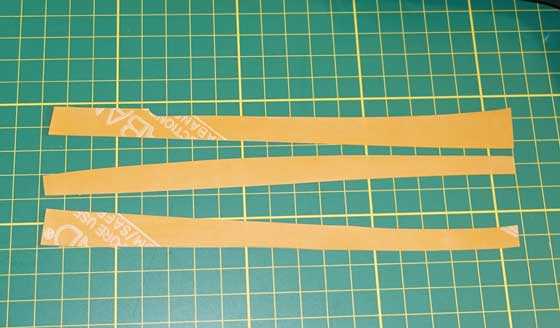 I cut three bands of equal length from the Theraband material.

I then made a loop at each end of the three bands.

The bands are uneven, but all I want is to see whether this approach even works. The bands went into the top cover of the gun, but they slopped over the anchors and when I cocked the gun, they didn’t all fit into the cocking groove on the launcher. It was a disaster!

Then I took the three bands apart and used the two smaller bands together in the same way. This worked — sort of. I could cock the gun, but when I shot it, the bands popped out of the launcher groove and the shot was weak. It registered 86 f.p.s. Okay, that doesn’t work.

I thought this was the end of it and I could install another surgical tube and be done with it, so I did. Since I knew the tube had to start out 7 inches long, there was no wasted time. The velocity was 127 f.p.s. which is very close to the best velocity I got in the Part 3 test.

I thought this experiment was over. But that evening I thought about it some more and I wondered whether twisting the flat Theraband might be a solution. It’s flat to begin with, and if I twist it many times would it roll into a cylinder that might work better?

I used the widest of the three bands I had cut before — the band I had removed when I tried two bands. As you can see, a wide band can be twisted thin. 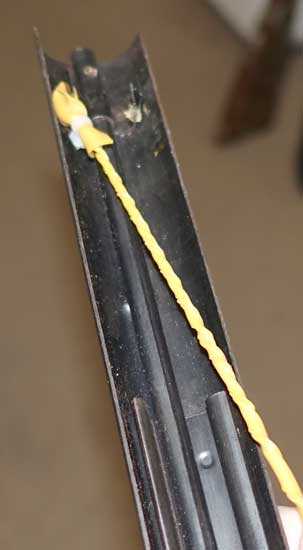 After anchoring one side of the band I rolled it to one side, twisting it into a cylinder.

It worked! This time the band loaded into the launcher’s groove and also allowed the gun to be cocked. The velocity was 129 f.p.s., which is as fast as I have shot so far. That is a good place to stop. I have no doubt that a higher velocity can be reached. I think 160 f.p.s. or even a little more might be possible, though I doubt 200 f.p.s. can be broken. I even cut a wider piece of Theraband Gold to test whether a special shape of rubber might help. 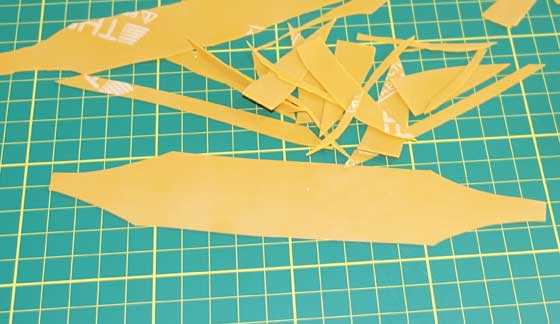 I cut this band and even started installing it.

At this point it dawned on me that the Johnson wasn’t designed for great power. So what if I can boost the velocity by a few f.p.s.? If it breaks the gun in the process I will have lost everything. As far as I’m concerned, I have tested this as far as I plan to go. Surgical tubing is still the easiest material to use and starting with a 7-inch length gives just enough on each end to make the loops.

I will transition from velocity testing to accuracy next. The Johnson was touted as being able to hit flies at 16 feet. Let’s see about that! 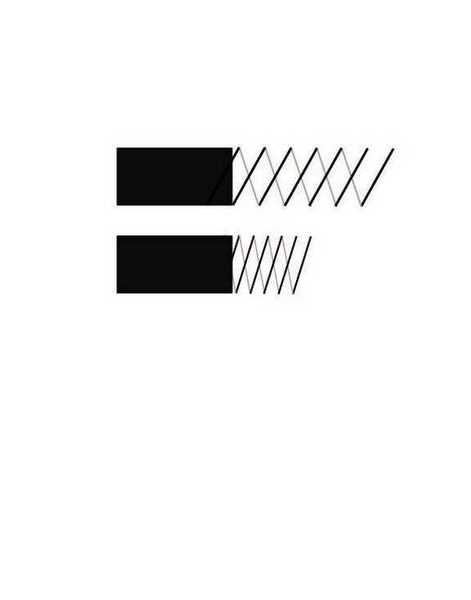 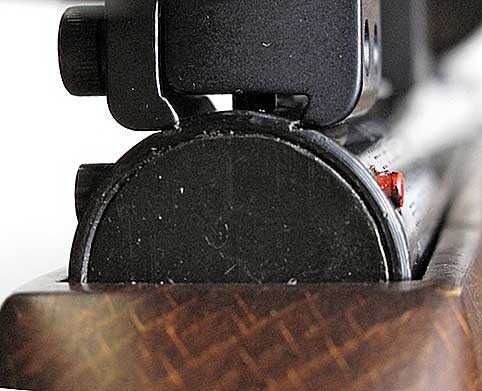