Today will be the start of the Sig ASP20 accuracy test, but it will be different than all the other rifles I have tested. I usually mount a scope and begin testing at 10 meters — looking for one or more pellets that are accurate for tests at longer ranges. I’m not doing that today. Before I get into the report, though, I want to address some readers’ concerns.

Someone asked me to check the sensitivity of the rifle to how it’s held. But I already reported on that back in August. I discovered back then that this rifle likes to rest directly on the sandbag and not be held by the artillery hold. I will test the artillery hold in later installments, but it’s pretty much a given that this rifle likes to be rested right on the bag.

The reader who calls himself The Other Mark B asked the following.

“Did anyone from SIG mention whether or not stock and trigger guard screws will never come loose? I ask (facetiously) because I called SIG SAUER customer service earlier today to request torque specs for the ASP20 stock and trigger guard screws. They refused to provide the data as it is considered “proprietary”. When I asked what I was supposed to do when the screws loosened up, they said that I should send the rifle to them as it has a five year warranty. I asked the service rep to check with his supervisor about this. I was put on hold and when the rep came back on line he repeated that the data is proprietary.

Do you think you can get SIG to provide the data or does it look like we’ll all be sending our rifles to them every few tins of pellets?”

I told him I didn’t think there was a torque spec for those screws, but that I would ask. Well, shut my mouth! Dani Navickas of Sig told me that Sig does indeed torque those screws to 30 inch-pounds during assembly, but they recommend that their customers just tighten them with a standard Phillips screwdriver, and don’t over-tighten them. Dani worked at Beeman back when Dr. Beeman owned the company, and in those days all spring gun powerplants were very buzzy. They loosened their stock screws regularly. So Beeman told everyone to tighten the stock screws tight, and then turn them 1/4 turn further, just to be sure. DON’T DO THAT WITH THIS RIFLE!

The ASP20 powerplant is smoother than most springers that only have half the power. It doesn’t need its stock screws tightened by a fanatic.

Dani also warned me that the rear triggerguard screw is just a wood screw and should not be tightened this way. It will hold on its own, and if you crank on it you’ll just strip it out.

Okay, let’s get started. All shooting today is with the rifle resting directly on a sandbag.

Today I am checking the zero of the Whiskey3 scope that came mounted on my rifle. This report is more about the scope than the rifle, though the rifle has to be involved. I’m not so much interested in accuracy as I am which pellets will coincide with the crosshairs as the distance to the target changes.

Ed Schultz told me the scope that came on my rifle had been zeroed at 10 yards, so that’s where I started. Today I will use the Crux Pb (lead) domed pellets that Sig recommends. I will also use JSB Exact Jumbo domes and see how they compare. Although the rifle was zeroed at 10 yards, the scope scale on the elevation knob was not moved by the person who did the work. It came to me indicating 20-35 yards. And I shot at 10 meters rather than 10 yards. 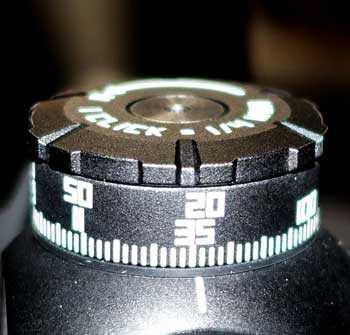 This is where the scope scale was set when I got the rifle.

I started with 5 Crux pellets seated deep. These pellets do not go into the breech easily, so I used the tip of a pen to seat them deep. At 10 meters 5 pellets went into a 0.259-inch group that was high and to the right of the aim point. 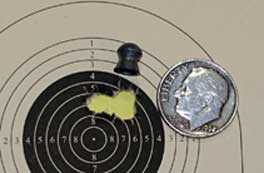 Five deep-seated Crux pellets went into 0.259-inches at 10 meters. It’s a good group, but it’s not on the aim point, which is the dot in the center of the bull.

Next I tried 5 Crux seated flush with the breech — thinking that was what the person at Sig had probably done. I used the plastic scale on one side of a pocketknife to press the pellet into the breech.

The first shot with the pellets seated flush was dead on target. I thought I was home free, but the group then spread out 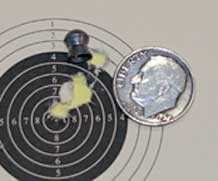 When seated flush 5 Crux pellets made this 0.58-inch group at 10 meters. The first shot was dead-on the aim point, but the rest did this.

I then decided to try the JSB Exact Jumbo pellet. Up to this point the scope was left where it was. These pellets seat flush in the breech snugly, but easily with just finger pressure. Five made a 0.175-inch group at 10 meters. It’s very good but unfortunately, too high. So I dialed the scope’s elevation down by three clicks and tried again. 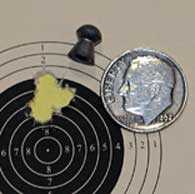 The first group of JSB pellets was 0.175-inches between centers, but a little high.

Three clicks down did move the group in the right direction, but not far enough. This time 5 JSB pellets went into 0.322-inches at 10 meters. 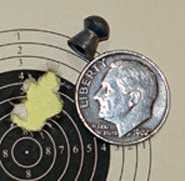 The group came down, but not enough. Five JSB pellets are in 0.322-inches at 10 meters.

I dialed the scope down another 5 clicks and shot again. This group is where I want it to be for elevation, but it’s too far to the right. The group measures 0.144-inches between centers. 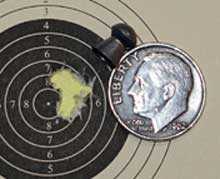 This time the elevation is good, but the group is too far to the right. Five JSB Exact pellets in 0.144-inches at 10 meters. If I had shot 10 pellets this would have a trime (a silver three-cent piece) next to it!

I put in three clicks of left adjustment and tried again. This time the group is almost exactly where I want it and 5 JSB pellets are in 0.308-inches at 10 meters. That’s close enough for me. I put in 3 more clicks of left adjustment for good measure and moved back to 25 yards. That may or may not center the group at the farther distance, but it will be close, and I can refine it better back there. 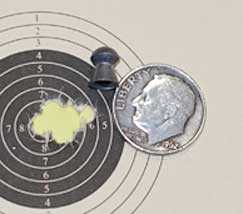 Five JSB pellets are in 0.308-inches and a nice round group. This will do for 10 meters.

Before I moved back, though, this is when the scale on the scope gets adjusted. I removed the 2mm Allen screw on top of the elevation adjustment knob and lifted the knob off the turret. Then I placed it back on the turret with the number 11 (11 yards is 10 meters) on the scale aligned with the index mark. Then I tightened the Allen screw. That is all there is to it! Now, back to 25 yards. 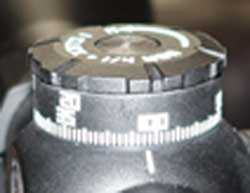 When the groups were centered on target this is where the elevation wheel ended up. So I removed it… 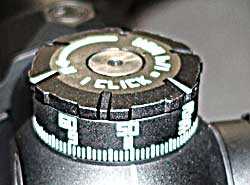 Oh boy! If I am right about this, the pellets should pass through the center of the bull, or very close. So, I adjusted the parallax on the scope until the image was sharp and then dialed the elevation adjustment to 20-35 yards.

Then I shot 5 JSBs. But they didn’t land in the center of the bull. They all landed high and to the right. The group is nice, at 0.472, but it isn’t where I expected it to be. It’s very close, but not exact. What is wrong? 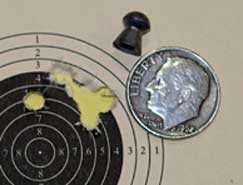 Five JSB pellets went into 0.472-inches at 25 yards, but the group is high. What gives?

And then it hit me. Sig set this scope up for the Crux lead pellet — not the JSB. I hadn’t shot that pellet at 25 yards yet because I was fixated on the JSB. I wonder what would happen if I shot the Crux seated flush?

The first Crux pellet hit the center of the bullseye! Second pellet was next to it on the right. Then one went high and left, followed by two more to the right. In the end I got a horizontal group that measures 0.614-inches between centers. It does demonstrate that the Crux will go to the point of aim when the Whiskey3 scope is used. But I wanted a smaller group to finish today’s report. How much does a Crux lead pellet weigh? 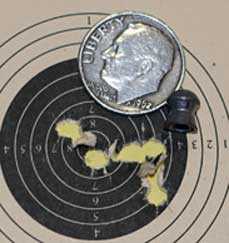 Five Crux lead pellets seated flush went into 0.614-inches at 25 yards. This group is on the aim point.

According to my digital scale a lead Crux weighs 16.1 grains. Do I have any other pellets, besides the JSB Exact Jumbos, that weigh close to that? Why, yes! The Air Arms dome weighs 16 grains on the nose.

I really wanted to see, so I got a tin of those and shot my last 5-shot group. It is DEAD-ON for elevation with the same scope setting! All it needs is a little bit of left adjustment. Five pellets went into a group that measures 0.412-inches at 25 yards. It’s the smallest 25-yard group of the test. 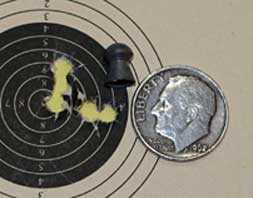 We are just getting started with the ASP20. What we have seen today is that the Whiskey3 scope does indeed work as advertised. That it hits the point of aim at any distance that’s dialed into its elevation knob, once it is zeroed and the scale is adjusted. And I have told you how to adjust it, once the scope is zeroed.

Peripherally, we have begun to see the accuracy of the rifle. Five-shot groups are not the best for demonstrating accuracy, but until I have the rifle dialed in they allow me more time to test things. Ironically, once I get to that part of the test I’m going to have to re-zero the scope so it doesn’t shoot away my point of aim.

Now, here are some things I haven’t mentioned yet. The Matchlite trigger is superb! Dare I say it — it’s an American Rekord! It doesn’t adjust as light as a Rekord, but it is completely safe from any adjustments you have no business making, where the Rekord is not. And it is just as crisp as you could ever want.

The ASP20 shoots so smoothly that I have to call it the modern FWB 124. Only this rifle produces almost twice the power of a 124 with less than 50 percent more cocking effort.

The rifle is quiet. Don’t ask me — my cats will vouch for it. I did not disturb them throughout the entire session.

Well I’m going to clean the barrel for starters. Ed Schultz told me that some of the rifles seem to need a light cleaning when they are new while others do not. I will clean it and then try those Crux pellets once again. I will try them both seated flush and also seated deep.

And some of you readers are concerned about cleaning an air rifle barrel that has active sound deadening technology in it. You are afraid of loosing a cleaning patch in the baffles. I will address that in the next report.

And I still have to test the accuracy difference between an artillery hold and a sandbag rest. I want to do that with the most accurate pellet — which I still need to find. This is going to be fun!

Sig tells me the Whiskey3 scope should be available to bundle in early 2019.

I seem to remember an acclaimed blogger once saying, “Buy it, buy it, buy it!” That would be my assessment of the ASP20 at this time.