This is the report about tuning reader Michael’s Winchester 427, which we know is a Diana 27. It’s a .22 caliber breakbarrel air rifle.

I completed the tune in Part 6 and then started shooting the rifle to burn off the excess oil from the piston seal pre-lube. I expected one or two explosions after the tune, but the rifle never stopped detonating. It was constant. Something was wrong.

The rifle acted like it was leaking air at the breech. There is a way to determine whether the breech seal leaks. Put something light, like tissue paper, over the breech and see if it gets blown off by escaping air. I did that and the paper stayed in place when the rifle fired. So the breech seemed to be okay.

I let the rifle rest for days at a time, hoping the issue would resolve itself. But then when I came back to it, It still detonated. I didn’t want to continue shooting it, as that would serve no useful purpose, so I set it aside again. Then came the SHOT Show and I was gone for a week, but just to make certain I had what I needed, I ordered some parts from Chambers before I left.

After returning from SHOT the rifle still detonated, so I reckoned there was still too much oil in the new piston seal. So on Thursday of last week I disassembled the rifle again and dried out all the oil from the compression chamber. Then I removed that oily seal and replaced it with another new seal that wasn’t oiled. 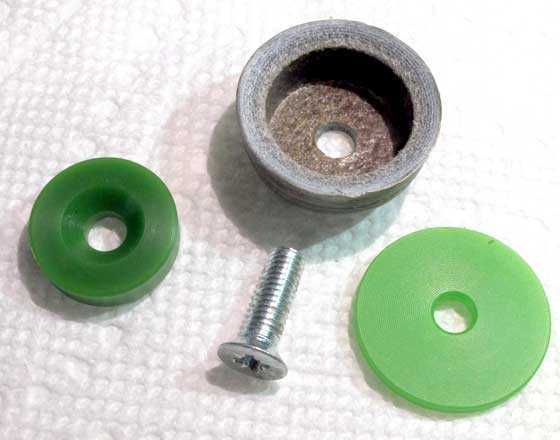 I installed this new piston seal assembly, thinking the other one was over-saturated with oil.

I assembled the rifle and then oiled the new seal through the air transfer port with just a few drops of oil. I wanted it to be lubricated but not saturated. But, even after this the rifle still detonated.

On Friday, when the rifle was still detonating, I got frustrated and put my hand over the breech to feel for air. The air blast was so powerful that it was painful, which surprised me, as I hadn’t sensed it in the earlier test.

At first I thought that my breech seal might not have been working well enough, so I installed a new synthetic breech seal from Chambers. It had arrived when I returned home from the SHOT Show, and I installed it now. But for some reason the rifle was still detonating. That was when I put my hand over the breech in frustration and felt the powerful air blast.

I tried heavier pellets, lighter pellets, silicone chamber oil and nothing worked to stop the detonations. However, by putting in the silicone oil I caught a break. When I fired the rifle last Saturday morning I saw a spray of oil blowing out of the rear screw hole for the rear sight. I examined it more closely and, sure enough, the hole for the rear screw is drilled all the way through and into the bore! I shined a light into the breech and could see light coming through that rear screw hole.

When I did the hand test there was something I hadn’t taken into account. My hand, being larger than the tissue paper, had also covered the screw hole for the rear sight. That was where the air was coming from.

Upon seeing the light coming through the screw hole from the bore I now knew what was wrong. Someone has deliberately messed with this rear sight! 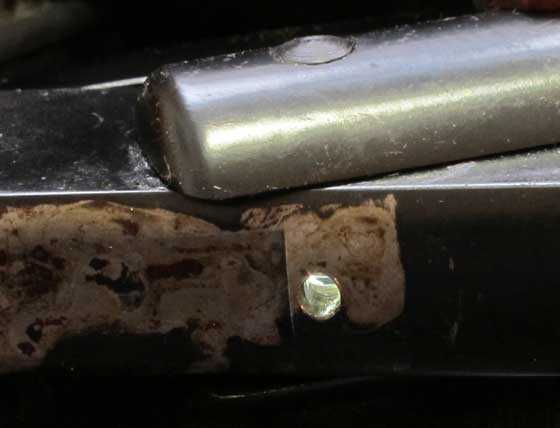 The rear sight rear mounting screw hole has been drilled all the way through and into the barrel. There are no threads in the hole anymore! This wasn’t done by the factory.

Rear sight was fooled with

When I first disassembled the rifle back in December I had noticed that the rear sight was missing its rear mounting screw and the horizontal adjustment screw had also been fooled with. When I removed the sight from the rifle I noticed there was epoxy on the bottom of the sight base and the bluing had come off the place on the base block where the sight attaches. 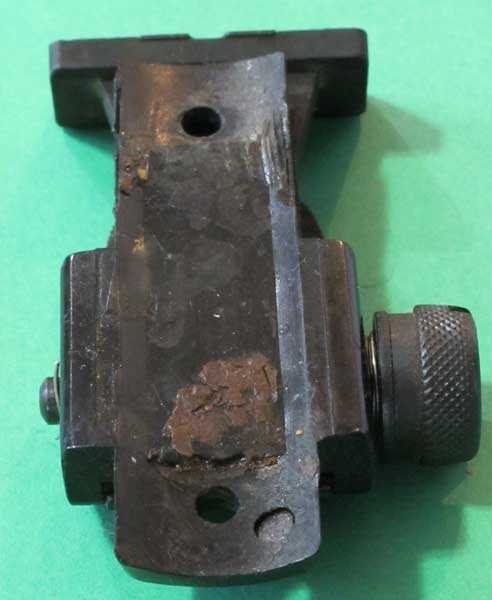 Traces of epoxy on the bottom of the rear sight base, coupled with the hole in the bore tells me someone has been fooling with this sight.

The place where the rear sight sits on the rifle has had its bluing burned off. This looks like a reaction with the epoxy rather than a deliberate thing.

Now everything came together for me. Someone has taken the rear sight off the rifle and, for some reason, drilled the rear screw hole deeper, breaking into the bore. Then, to fix the mistake, they tried to epoxy the rear sight back on the rifle. That won’t work.

Too much air escapes the compression chamber

With this hole in the barrel, too much compressed air escapes the compression chamber, and it escapes too fast. The piston is not slowed down by the cushion of pressurized air, because that cushion never forms. This rifle will never stop detonating until that hole is plugged.

That brings the project to a standstill. Getting to this point has taken me two full days of work.

Michael’s rifle has now been tuned and the tune feels good when the rifle doesn’t detonate. I was able to plug to hole temporarily to test it. The trigger is adjusted nicely and I am ready to get on with the rest of the testing, once Michael decides how he wants me to proceed.

Don’t be discouraged by this turn of events. When everything is completed it will serve to demonstrate that, in almost every instance, a vintage air rifle can be repaired.