Today I start the report on the Air Venturi TR5 Multi-Shot Target Air Rifle. This rifle is a close copy of the IZH-61 repeater that no longer can be legally imported into this country. So, a little background is in order.

The IZH-61 that cannot be imported into the U.S. any longer is a unique repeating sidelever youth pellet rifle.

That’s a lot of multi-part reports! You need to know the background. In the 1990s when Pyramyd Air was getting started, they began importing the IZH-60 (single shot) and -61 (repeater) from Russia. It didn’t hurt that the founder of Pyramyd Air, Joshua Ungier, had spent his childhood years in the Soviet Union and was familiar with both the languages and customs. Josh owned Pyramyd Stone, and imported decorative stone for architectural projects as well as colored gemstones — both of which took him into the Soviet Union and later, Russia and some of the former Soviet provinces, on buying trips. One time while there he saw a strange little airgun at the Tashkent International Airport. It was the IZH-60.

In Moscow, on his way home, he saw another IZH-60 in a department store and was permitted to examine it. He though it might sell well in the U.S. He also learned that the store carried no American airguns like Crosman and Daisy. Josh is always one to spot a business opportunity. Okay, I will now cut to the chase, but if you like this story, be sure to read the 5-part report, How and when PA got started.

When the rifles first showed up in the Pyramyd catalog (it was paper back then) everyone was intrigued — especially me because I wrote the monthly newsletter, The Airgun Letter. I bought one to test and started spreading the word. These airguns were cheap in those days — well under a hundred dollars, so people didn’t buy just one — they bought them five and ten at a time. I remember my friend Mac bought more than 30 over the years and gave them away to friends and the children of friends. The single shot 60 came first (I still like it best) and was followed by the 61 later on. Let me tell you something about the rifles now.

Except for the repeating feature of the 61, the two rifles are virtually identical. They are small spring-piston air rifles in .177 caliber, only. They cock with a long sidelever on the right side. I don’t think they were ever made for lefties. The Soviet Union didn’t work that way. For their Army battle tanks they selected crew members based on their overall height (Soviet tank turrets have very little space inside and they have low ceilings). When you have as many people as they did you pick the men to fit the equipment — not the other way around.

And the IZH-60/61 was made to be an informal target rifle for kids. So it is easy to cock and has a hammer-forged barrel that the Soviets got right — as they usually do with guns. The sights were open, but the front post was hooded and the rear sight came with a metal plate that screwed over the rear notch to present a peephole to the shooter. It was located too far forward, but an 11mm dovetail on top of the receiver allowed it to be repositioned closer to your eye. 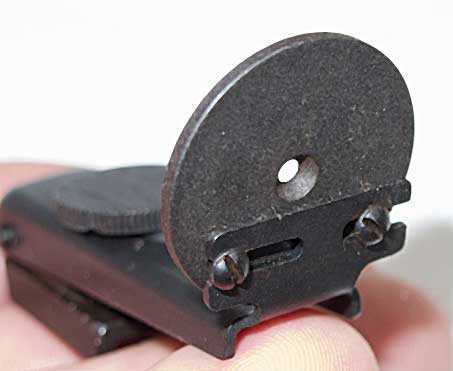 Attach the metal plate to the IZH-61rear sight and it becomes a peep sight.

The accuracy of the little gun was quite good. Some of them were even better than good. As a result, people started turning them into full-fledged formal target rifles. I remember a guy I wrote about who had installed an Anschütz target front and rear sight worth about $500 on his $90 (at the time) rifle. He shot matches with it. And that was the real story of the little IZH rifle. It was accurate.

In retaliation to Russian politics and international aggression a few years ago the U. S. imposed economic sanctions on certain classes of goods, and airguns fell into one of those classes. When that happened the IZH rifles and the IZH-46M target pistol could no longer legally be imported into this country. Those airguns are still being made and sold elsewhere, just not in the U.S.

That left a huge hole in the supply of good and affordable smaller target rifles and pistols that are available in this country. Air Venturi started looking for alternate sources of supply. The TR5 is the fruit of that effort.

The TR5 is meant to emulate the best features of the IZH-61 rifle, while adding a few innovations of its own. It’s made in China and has a slightly different appearance than the IZH, but that was done to make the rifle more ergonomic. In all about 30 changes were made to the new rifle. Many were things Air Venturi had been asking the Russian manufacturer to do for years. Only a few of these changes are things that most shooters will recognize.

1. Improved Stock Adjustability: The length of pull can be altered with an AR15-style adjustment that is very easy to use. It adjusts to one of 5 positions. The pull ranges from 12.5- to almost 15-inches. The buttpad also adjusts vertically and has a soft, grippy rubber buttpad — two features the IZH-61 did not have.

2. There is a UIT accessory rail in the bottom of the forearm — the same as you would find on any of the high-end 10-meter guns. This can be used for slings, hand-stops, bipods, etc. It makes a nice option for an entry-level 3-position or 10-meter gun.

3. Improved Trigger Adjustability. The IZH had a trigger that was adjustable for length of pull only. The TR5 has a two-stage adjustable trigger. From just taking a few shots on the rifle straight out of the box I can tell you that the first stage is present but is quite short and there is some movement but no creep (uneven starting and stopping) in stage two. I will see if I can adjust it to be crisper, but it isn’t bad right now.

4. Velocity: The IZH was rated at 490 fps. Pyramyd Air rates the TR5 at 500fps with 7 grain pellets, but most of the guns they’ve tested are shooting in the 525 range. That being said, it is still acceptable for them to be shooting in the high 400s. I will test this one for you of course, but the next report will probably still deal with the introduction to the rifle, since there is so much ground to cover.

5. Magazines: The gun comes with two 5-shot mags. They index automatically, and are very easy to load. Sadly, IZH mags (at least right now) are not compatible. If you have some left over you can remove about 0.015-inches off the bottom (when the ridges are at the top and the taller end is on the left).

6. And there is a green stock option! Air Venturi asked for this. The green stock is there as an option to make the gun less threatening to parents. With the semi-tactical look of the gun, this non-threatening color could prove to be a popular option for those purchasing the gun for a junior shooter.

The rifle no longer comes with a peep sight attachment for the rear sight. But it does have a grooved receiver to accept a target sight. And that is among the things I will be testing.

Pyramyd Air told me to expect this rifle to be accurate. It was not selected especially for me. They just have confidence that all of their rifles will be accurate. I plan to test that extensively.

I’ve loaded both magazines to see how they work and all pellets are loose in both of them. They fell out as I loaded the magazine into the rifle. My solution is to lay the mag on a flat surface and press the pellets in as deep as they will go with a ballpoint pen. It works and they don’t fall out after that. If there were two plastic ridges inside each pellet chamber that ran the length of the chamber, the pellets would probably remain in when loaded.

The TR5 probably does not operate exactly how you think it should. My advice is to read the manual that is well-written. The photographs, however, are very dark and it’s difficult to see some details, so have the rifle to examine as you read.

Importance of the TR5

That’s it for today, but there’s a lot more coming on this air rifle. This is one that will be an instant classic if it’s accurate. We have waited a long time for this one! 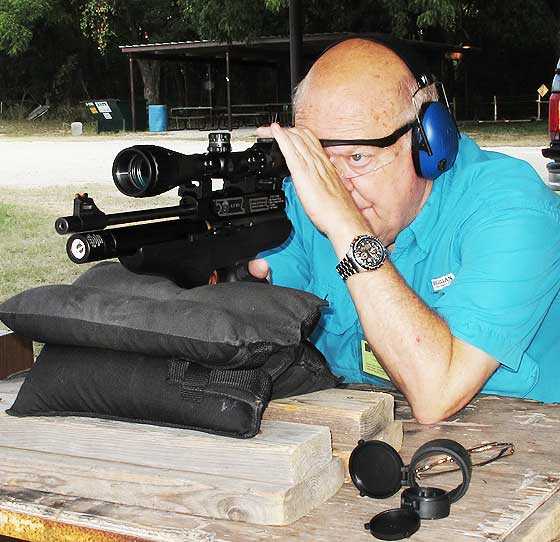