Today I returned to the Air Arms S510XS Ultimate Sporter to see if there was anything new to learn. There was, and here is my report.

The rifle was already sighted-in from Part 4, so all I had to do was fill it with air and start shooting. The Air Arms 16-grain Field pellet has proved to be the best so far, so that’s all I shot today. I will need to try some different pellets in the future before moving on to 50 yards.

The first group was shot with the rifle set up exactly as it was in Part 4. That’s with the power set at one click below maximum. Ten pellets went into 0.30-inches at 25 yards. As you can see, this group is fairly round and not that bad. But I wanted better.

Since I had already shot smaller groups in Part 4, I decided to drop the power one more click (2 down from the top) and see what that did. The pellets landed lower and to the right of where they were before. And this time 10 of the same Air Arms domes went into a very round 0.18-inches at 25 yards. Unfortunately when I measured it before photographing, I got a group size of 0.25-inches, so I used the dime for scale, where the trime was really indicated. This is the smallest group of this test.

When the rifle’s power was reduced by one level the rifle put 10 pellets into 0.18-inches at 25 yards.

As you know, I’m also testing the Meopta Optika6 3-18X56 scope. Given where the center of this group is, I adjusted the scope 7 clicks to the left and 5 clicks up and shot a third group. The groups shifted on the first shot, so the Meopta scope does not suffer from stiction (a failure of the impact point to move until the rifle has been fired several times). This time 10 pellets went into 0.34-inches at 25 yards — the largest group of the day.

Notice that the group is now a little too far to the left. I had adjusted it 7 clicks left last time, so I went back 2 clicks to the right.

I also wanted to see if the S510 was still accurate even when the onboard gauge  reading was 150 bar. That’s where I have been refilling the rifle in the past. So, the next group was fired without refilling.

The power setting is still the same — two clicks down from the top, And the scope was adjusted two more clicks to the right. Once again the scope moved to the new setting on the first shot. Ten pellets made a 0.337-inch group at 25 yards. And the group is still slightly left of center.

In part 4 I told you that the Meopta scope is so sharp and clear that I can see the tiny illuminated central dot wandering around inside the 9-ring of the bull. I can keep it on top of the central 10-ring (dot) about half the time. I thought that seeing it clearly would help me shoot better but instead it’s just showing me clearly why my groups are so large. Oh, well!

The group is still slightly left of center so I put two more right clicks of adjustment into the turret. I left the elevation where it was.

This would be the last group of this test, so I refilled the rifle to 250 bar. I decided to pull out all the stops and really concentrate on the final group. Unfortunately that went out the window with the second shot that doubled the group size. After that all the pellets went into the first hole, giving me a 10-shot group that measures 0.223-inches between centers. Yes — the centers of this group are a .22-caliber pellet apart! 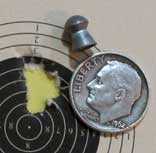 I got to know the rifle and scope a little better this time. This S510 is so accurate and so easy to operate! There is nothing fiddly about it. It simply works as advertised. And the magazine is the easiest rotary magazine I have ever filled.

The Meopta scope is beyond anything I have ever used and that includes a $1,500 Nickel Supra scope I once owned. It’s so clear that all my foibles are obvious. The group sizes are my fault, not the gun’s. I bought the scope, so you will be seeing it many times in the future, but for now I’m leaving it on this rifle, as there is more to test.

I am also buying the adjustable Sportsmatch scope rings. I scope so many airguns that have droop and this mount is precise and easy to use. I will probably buy a second one.

Next, I want to test the rifle with a broad range of pellets, to see if I have overlooked anything. I may even include a group of these pellets that I have sorted for weight and size. After that I am ready to go out to 50 yards. If this rifle can put 10 pellets into less than 0.70-inches at 50 yards, I may be facing a tough decision ahead! 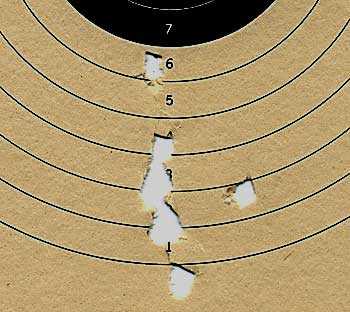