I though that was a great idea. Unless I test it, who knows what the other notches will do? And also there are the two heavy washers that add weight to the piston and more tension to the mainspring.

Instead, I will go to the opposite end of possibilities and set the mainspring on the high notch with two washers installed. That will bracket the power possibilities.

The Pro-Sport came apart in a few minutes with no mainspring compressor needed. Remember that with this Vortek kit the pretension on the mainspring is even less than on the factory gun and even that doesn’t need a compressor. 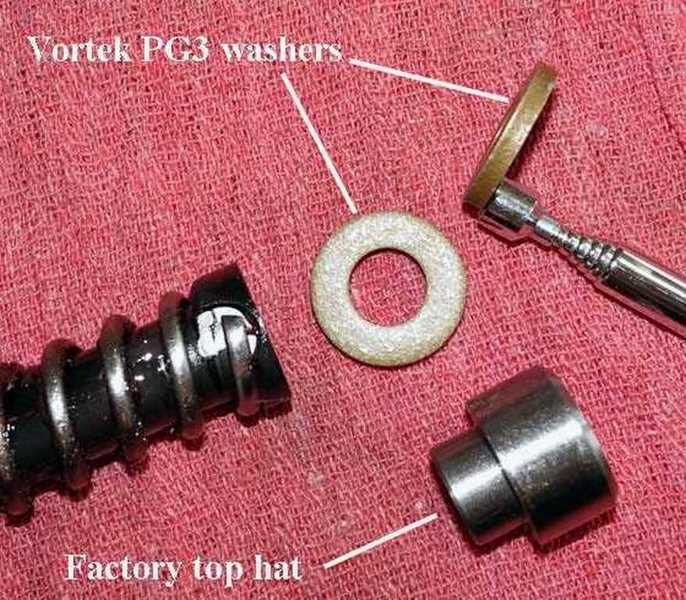 The thousand-word picture. The mainspring is in the lowest notch from the previous tune. The two washers from the Vortek kit are going in ahead of the forward spring guide (black thing the mainspring is wound around) that’s inside the piston. The factory top hat is shown below. One of the washers is stuck to the tip of a magnet to show that it’s ferrous.

After that was accomplished the rest of the job took mere minutes. But before I go there, let’s look at what I’m about to do.

The last tune was with the spring set in the lowest notch of the spring guide. And no washers were used. So the piston was almost as light as it could be. By removing the synthetic spring guide it would have been a few grains lighter, but the spring would then have had room to vibrate on the piston stem. Vibration is a bad thing, so those few grains of weight are well spent.

I weighed the two washers, which are steel. One weighed 85.5 grains and the other weighs 86.2 grains. When I add that the two should weigh 171.7, but for some reason my scale says 171.4 grains. We are talking about a weight difference of a postage stamp, so it may be more in the technique I was using to place them on the scale than any real weight difference. At any rate, an additional 171.4-grains of weight is being added to the Pro-Sport piston. 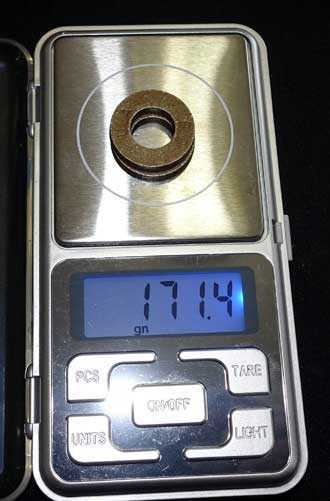 Both Vortek washers together weigh 171.4 grains. They will be going into the piston ahead of the mainspring.

For curiosity I also weighed the factory top hat that goes into the piston like the washers. It weighs 352.2 grains, or 180.8 grains more than the two washers. It’s a little over twice the weight of the two washers. That’s interesting but I don’t know why. 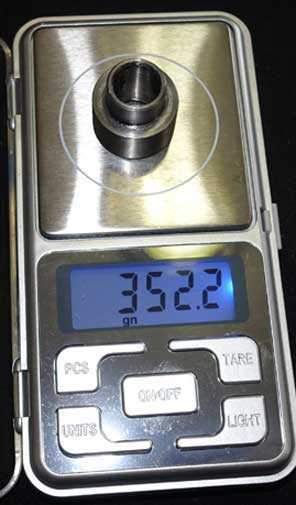 If someone reads this entire report they will discover that I removed the sliding compression chamber for the first tune in Part 5. I did it because the piston didn’t want to go into the chamber when I started assembling the gun. But it really isn’t necessary to do that. Just fiddle with the piston and the piston seal will eventually clear and go in the chamber. This time I did not remove the sliding chamber and the time to assemble was cut by several minutes.

I won’t show you the entire assembly of the rifle because that was covered pretty well in Part 5. I will just show you the order of the parts as they go back into the gun. The two washers go onto the piston rod first. They add that 171-grains of additional weight to the piston, which should change its performance with heavier pellets a little. They also add perhaps a quarter-inch or a little more of preload to the mainspring.

The higher notch on the spring guide also adds a little preload to the spring. I would guess that together the notches and the two washers add about 3/8-inch of preload. That isn’t much, so Yogi, I doubt we are going to see the factory spec with this kit. I think it may get a little closer to 12 foot-pounds, which is what the specs tell us to expect. 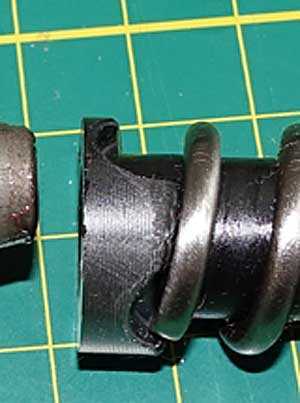 There is the end of the spring in the highest notch. It isn’t seated all the way but when I cock the rifle it will seat. 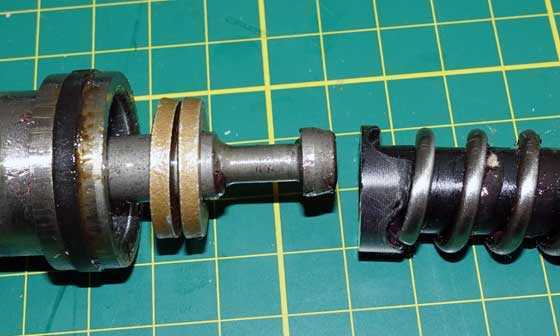 And here is how the parts go back in the piston and then into the rifle.

Handling the parts during this procedure removed most of the Tune in a Tube that was on the outside of the mainspring, so I added just a bit as the spring went back into the gun. It was still coating the inside of the spring, the rear spring guide and the sliding chamber so I left those alone.

The cocking effort felt almost the same with possibly one or two more pounds of effort needed to cock the rifle. On my scale it measured 37 pounds of force required, where with the lightest tune it was 35 lbs. and from the factory 48 lbs.

I can’t detect any difference in the firing behavior from the previous tune. Recoil seems the same, too.

Should I test the rifle for accuracy again with this tune? It’s bound to be very close to where it was before.

And how should I send the rifle back to Pyramyd Air — with the tune just installed or returned to factory spec? I guess I’m asking whether you think anyone would want to purchase a .22-caliber Pro-Sport that has been tuned to 12 foot-pounds?

I don’t know if this is the last report or not. I’ll await your decision on that.

I have to say I am thoroughly impressed by the Vortek PG3 tune kit that delivered EXACTLY what was promised! With all the variables involved (TIAT and me being two of them) I think it’s remarkable it turned out as well as it did.