Today I want to discuss what matters in an airgun. And I hope to cover both rifles and handguns.

Why am I writing this? Well, the number one reason is to get all of you commenting because what you have to say is often more important than what I write.  And the second reason I’m writing this is for the newer airgunners. Some of these guns are frightfully expensive and how can you know what you don’t know about them unless someone tells you? Let’s start with handguns.

Like air rifles air pistols have the same three powerplants — spring, pneumatic and CO2 — and they operate in the same general way with an exception that I will note. Because they have to be smaller to be able to be held easily, air pistols tend to be a lot less powerful than air rifles. But there is an exception. The single stroke pneumatics that I will now shorten to SSP are a big exception. The SSP powerplant is already the weakest of all airgun powerplants. Only the catapult powerplant that really isn’t an airgun is weaker.

But SSP pistols are not that far behind SSP rifles. For example, an AV-46M will put a lighter .177 pellet out at 500+ f.p.s. An SSP rifle may get over 600 f.p.s., which isn’t that much faster when you compare them to spring piston or precharged pneumatic powerplants. A spring piston pellet pistol might get up to 600 f.p.s., while a rifle can go over twice as fast with the same pellet. 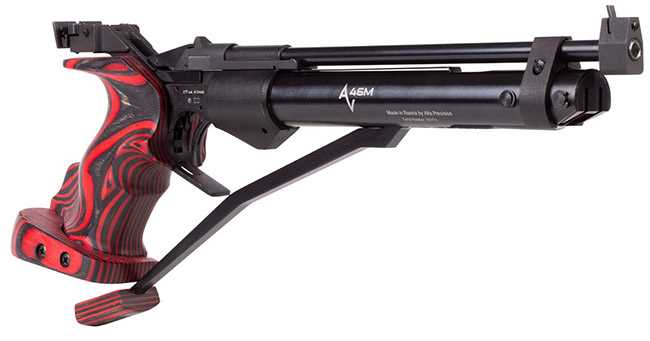 When you get into pneumatics and CO2 guns it’s mainly the barrel that determines the power. As long as the firing valve takes advantage of it, an 18 to 19-inch barrel will be the most powerful and it really doesn’t matter whether it starts life as a handgun or a rifle. Of course a handgun with a 19-inch barrel isn’t really a handgun anymore. That’s when people start wondering if there is a buttstock that attaches to this pistol? It would sure make a nice carbine. And that’s when the pistol goes away.

Spring pistol air pistols are less powerful than spring rifles, but there are a couple that are very powerful. The Beeman P1 is one that shoots lightweight .177 caliber pellets above 500 f.p.s and as fast as 600 f.p.s. The Diana LP8 is even more powerful. When I tested it with extremely lightweight vintage Crosman Silver Eagle pellets I got an AVERAGE velocity of 755 f.p.s. — WOW! With 7-grain RWS Basics the LP8 averaged 581 f.p.s. 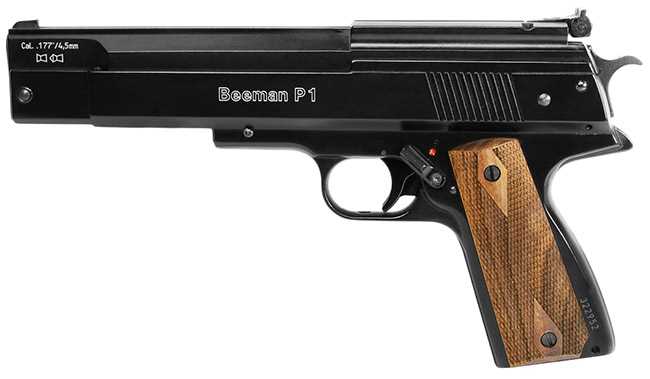 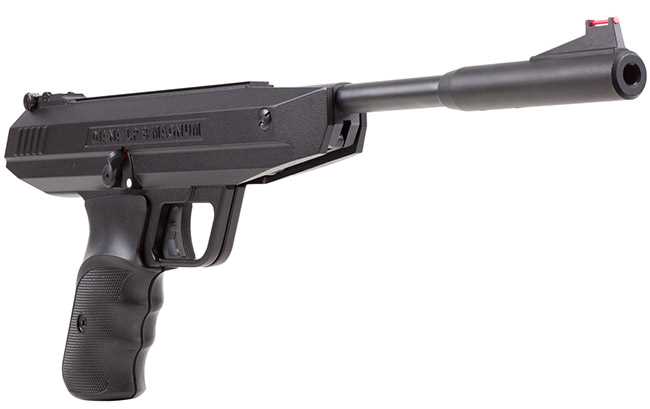 Neither the P1 or the LP8 is cheap, but the P1 costs $210 more than the LP8. Is it worth it? Yes, if you like a nice adjustable trigger. As for power the LP8 is the winner by a small margin and for accuracy it goes back and forth. The point is — these handguns are worth the money if you can swing it.

What do you want?

If you want an heirloom air pistol consider getting a P1. An LP8 is in the heirloom category, too, but the P1 is on top.

If it’s accuracy you’re after, get a Beeman P17. Yes, the German-made P3 is made better, but the difference is so small that I doubt it’s worth it. And both guns qualify for the heirloom status.

You want power in a “handgun”? Get an AirForce TalonP. I saw over 50 foot-pounds in a .25 caliber I tested, though the accuracy lived at around the high 20 foot-pound region. I put quotes around the word handgun because the TalonP is as much an air pistol as an AR “pistol” is a pistol. They are more rifles without stocks. But at 50 yards I put seven .25-caliber pellets into 0.577-inches with five in 0.246-inches. 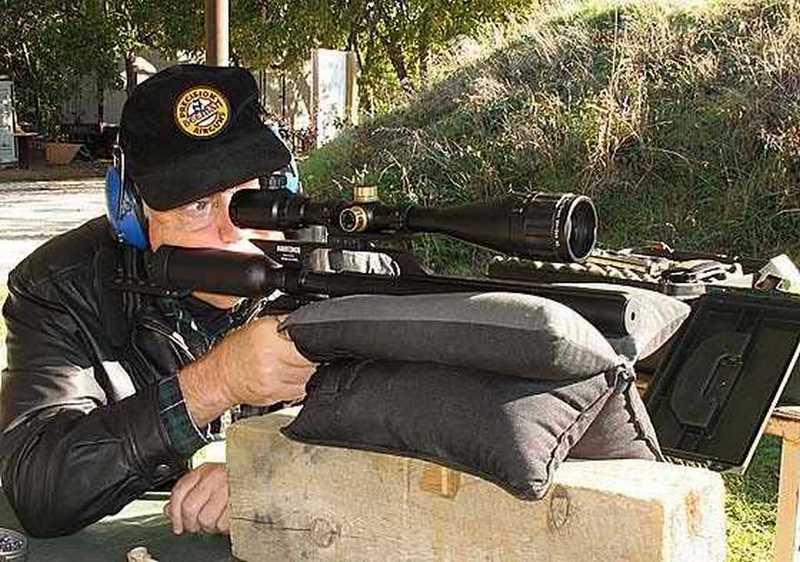 With the cantilever mount moving the scope forward, the eyepiece was positioned perfectly for a good cheek weld on the reservoir. The ear protectors are for the firearms that are next to me. 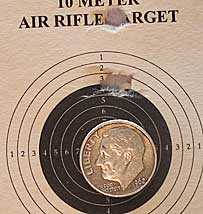 50 yards: Five JSB Exact Kings in the hole below and two above. The five-shot group was 0.246 inches between centers. Add the other two shots, and the group grows to 0.577 inches between centers. Even that is better than most .25-caliber air rifles can do at 50 yards; but the point (trick) is that I knew those last two shots were going to stray because of the pressure drop in the reservoir, and I didn’t have to shoot them.

And then someone says he wants the power of the TalonP, the size of the P1 at the cost of the P17. Yeah — right! Welcome to the blog. Search the past reports to learn why this isn’t possible, any more than you can have a firearm pistol that’s as powerful as a .357 Magnum with a kick like a .22 and a size like a Walther PPK.

The same things that hold for pistols are also true for rifles. The three types of powerplants work the same and the 18 to 19-inch barrel limit holds for CO2 rifles just like pistols. But with rifles the limits of power and accuracy go a lot farther than they do for handguns. Let’s look.

Where air pistol power cuts off just below 60 foot-pounds (with the exception of specialized air pistols such as those made by Dennis Quackenbush), air rifle now exceed 800 foot-pounds (.50-caliber AirForce Texan) and smallbores (.177 to .25 caliber) top out at just above 100 foot-pounds (AirForce Escape). And both of these rifles are very accurate.

Personally I prefer power down in the 500+ foot-pound range for a big bore and around 30 foot-pounds for a smallbore. They just seem to operate better for me there. And by operate better I mean several things including accuracy, conservation of air and stability.

What about the .30 caliber and .35 caliber pellet guns? Where do they fit? Well, in my opinion they are in the big bore category. Just remember that nobody made BB Pelletier the Full Ruler and Controller of the universe. So what I just said is my opinion and not fact.

From yesterday’s report you know I am not talking about the so-called “extreme” airgun sports. I mean real-world accuracy — the kind most airgunners consider, which I will define as about 50 yards for long range and 25 yards for the smaller rifles.

The recent work I’ve done with my TX200 Mark III that I tuned with Tony Leach’s 22mm piston kit has opened my eyes to the accuracy potential of a springer. This is an area I want to explore farther with you. Remember the Meopta MeoSport 3-15X50 scope I’m testing? Well I’m thinking of purchasing it (it is so good for such a good price) and mounting it on my Beeman R8 Tyrolean. That is another extremely accurate springer and I bet that scope will bring out its best.

In this category I will address fit and finish. These days manufactures are addressing the fit issue with ergonomics — adjustable combs, buttplates and so on. When I say “and so on” you may think there isn’t anything more but we now have combs that rotate front to back to cup your face differently and there are triggers that move around a lot. So there are other things.

As for the finish aspect, as the price increases the finish usually does, too. My Air Arms S510XS with Laminate Stock costs several times more than my Marauder. It shows in the finish and a little in the ergonomics — not in accuracy.

I called this the “shouldn’t” matter section because to some folks it still does matter — a lot. In my opinion it’s the “doesn’t” matter section. If the air rifle or pistol looks like it came straight from a Star Wars movie set or from a Hollywood battlefield it doesn’t add anything to the performance. I know a fellow who owns Old Blue from the movie A Christmas Story. There were actually several of those BB guns made and, to the owner of this one, where it came from matters a lot.

I do understand collecting famous memorabilia, but it isn’t in my nature to do so. I get asked all the time whether I know if I ever owned this or that airgun, because in the owner’s eyes that puts a premium on it. Like I said I do understand collecting famous stuff, but I ain’t famous and no amount of hoopla will make it so. If you get an airgun from me at a show make sure what you get is something you want, because that’s all the real value it should have. Winston Churchill is famous — not BB Pelletier.

That said, I do think the special weathered or battlefield finishes we are seeing on some airguns do add to their desirability. They add a sort of, “If only it could talk” panache. But John Wayne’s Colt SAA that he carried in several films — now THAT is collectible. If a first generation SAA in nice shape is worth $5,000 you can add at least one zero for his, and probably several times that.

I’m saying don’t buy airguns on the basis of velocity and power. Buy them after SEVERAL different reports have conveyed they meet your needs in the categories that are important to you.

Your wives think I’m the Great Enabler. If I am I only enable you with the things with which I think you should be enabled. 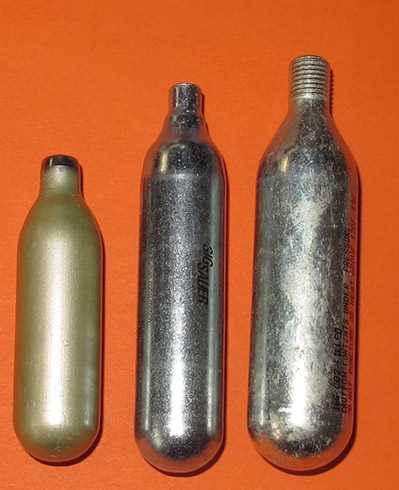