In Part 1, we received so many comments and questions about the Beeman P1 that it’s now certain that this report will have more than three parts. I’ve been asked to show you how to hold the handgun for best results, and while I’d hoped to get to that today, something has come up in today’s testing that caused me to postpone that until the next report. I want to spend some time explaining a spring-gun phenomenon that I’ve read about but, until this test, have never seen.

However, first things first. I promised the links to the older reviews of the P1/HW 45. The first link goes to a report I wrote back in 2007, which was supposed to be an update on this pistol: Beeman P1/HW 45 air pistol.

That report was supposed to update the report I did back in 2005: Beeman P1/HW 45: A shoulder stock, red dot sight and more!

After reading both of the older reports, I see that a lot was left out. I hadn’t started using the current report format yet, so I wrote things pretty much as they came to me and as the readers asked for them. Today, I’ll try to hit all the important points in every report. The later report does explain how to fit the piston seal to the compression chamber by dry-firing the gun, though. That’s a factory procedure, so don’t worry about it.

Back to today’s report
Today, I’m going to report on the velocity I get from my P1, which is now 15 years old. As I mentioned in the first report of this series, I lubricated my gun when it was new, and that was the last time I was inside the powerplant. I also made a trigger modification, but that has no bearing on the powerplant.

What you see today is the performance of a Beeman P1 after 15 years of relatively light use. I estimate fewer than 5,000 shots have been fired in all that time. Many airgunners have speculated that since the wire used in the pistol’s mainspring is thin, it will degrade over time, causing the pistol to lose power. Let’s see how much truth there is to that. The spring wire has to be thin to fit inside the small compression/spring cylinder that’s hidden inside the top of the pistol. There’s only so much room for things inside the small package that I showed you in Part 1.

Cocking effort
I measured the cocking effort by placing the topstrap on a bathroom scale and pressing down to open the pistol and cock the spring. It took exactly 12 lbs. of force for this, though I would have estimated the number at 20 lbs. if the scale wasn’t available. I guess the closeness of the two levers (the topstrap and the rest of the gun) when cocking makes the effort seem greater. 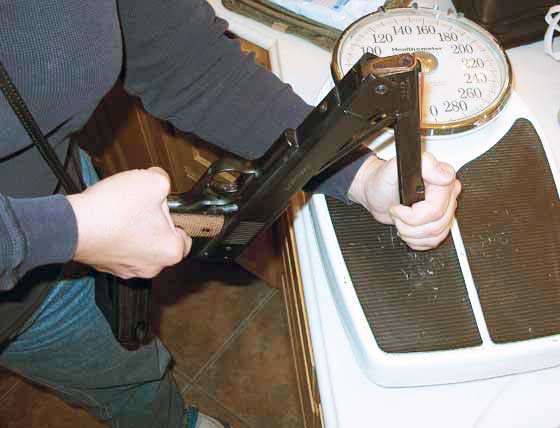 This is how you test the cocking effort of the P1. Just keep pulling apart the action and bearing down on the scale as you do.

It seems to take no more effort to continue to cock the gun to the second sear stop, but you do have to apply the same force over a longer arc, so arguably it really does take more effort. However, practically speaking, once the lever is moving, it’s just as easy to go all the way as to stop halfway, which is why I never use the low-power setting.

Velocity
The first pellet I tested was the venerable Crosman Premier 7.9-grain domed pellet in the brown cardboard box. I noticed that some of our newer readers don’t understand that when I link to a certain pellet in the Pyramyd Air website, that’s the pellet I use. I don’t normally use any Premiers unless they come in the brown cardboard box. I’m telling you this because a couple of readers were speculating about whether to use the Premiers in the tin can or in the box. As a veteran who has used Premiers since they first hit the market, I find it difficult to think of anything that’s not in a box as a Premier. It’s an old habit that has a lot less significance now that die-lots mean so much less than they used to.

These pellets are extremely uniform in this P1, as evidenced by their tight velocity spread at both power levels. In Part 1 and also in one of the older reports, I told you that this pistol averaged 559 f.p.s. with Hobbys. So, the difference of just 6 f.p.s., between the old and current velocity readings is almost too small to have any impact. The gun is virtually shooting as it did four years ago and even as it did 15 years ago. That should answer the question of whether or not the mainspring breaks down over time. Clearly, it doesn’t.

And now for the special event
I wasn’t expecting what I am about to show you, but I’ve never shot super-lightweight pellets in my P1 before. I knew they would be faster. They would have to be, because they’re so much lighter. But they also did something that I didn’t expect.

I wondered if I had somehow “awakened” the gun with these lightweight pellets. But just as I was thinking that, shot nine registered 533 f.p.s, followed by shot ten at 532 f.p.s. The velocity had dropped back to exactly where it had been before the sharp increase. What was happening?

Cardew was right!
I thought for a bit and then remembered that one of the Cardews who wrote the book The Airgun, From Trigger to Target had written that all spring guns exist at one of four possible phases of function. They’re either a blowpipe, a popgun, a combustion gun or a detonation gun. Most of the time, the guns we deal with in this blog are in the combustion phase, in that they diesel with each and every shot. By diesel I mean that they burn some of the lubricant that makes its way into the compression chamber by igniting it through the heat of compression.

Most of the time, we deal with only a single phase in one gun. What I believe has happened in this test is that the P1 converted from being a popgun to a combustion gun for five shots in the shot string, then reverted back to being a popgun for the last two shots. When it was launching pellets at 530 f.p.s., it was doing so by the pressure of compressed air, alone. When it began to push them out at above 580 f.p.s., it was burning some of the fuel (oil droplets) that were in the compression chamber. Bear in mind that this gun was tuned with Beeman M-2-M moly (now sold as Air Venturi Moly Metal-to-Metal Paste), alone, and that was done 15 years ago. Even that small amount of “fuel” is apparently enough to raise the muzzle velocity significantly, as can be seen in this one test.

The “average” velocity for this test was 562 f.p.s., but no one pellet in the shots string went close to that speed. What we actually have here is a bimodal distribution in which the test samples are not all coming from the same source. Some are when the gun is functioning as a popgun and others when it’s functioning as a combustion gun. There are actually two separate distributions of velocities for this pellet when fired on low power, and the only explanation I can think of is the one I’ve given. At the “average” velocity, the muzzle energy is 2.81 foot-pounds.

As I said at the beginning of this report, I felt this was such an important event as to warrant some extra explanation. Let’s look at what happened when I shot the same pellet on high power.

Crosman High Velocity Super Sonic pellets on high power
The average velocity on high power was 677 f.p.s., but, again, no pellet within the shot string went close to that speed. I got another bimodal distribution, with the slower pellets down in the 653-666 f.p.s. region, while the faster pellets were all over 700 f.p.s. (up to the maximum of 704 f.p.s.). I didn’t expect that at all. I thought that at high power the pellets would come out at one consistent velocity, but that’s not what happened. By the way, at the average velocity, the muzzle energy was 4.07 foot-pounds.

Well, I never expected a physics lesson from testing this pistol. Still, it’s nice to know the old gal still has what it takes to get the job done. And, the cocking effort is so much less than I would have imagined!

Next time, I’ll show you how to hold the pistol for the best accuracy, plus I may have another tidbit for you. 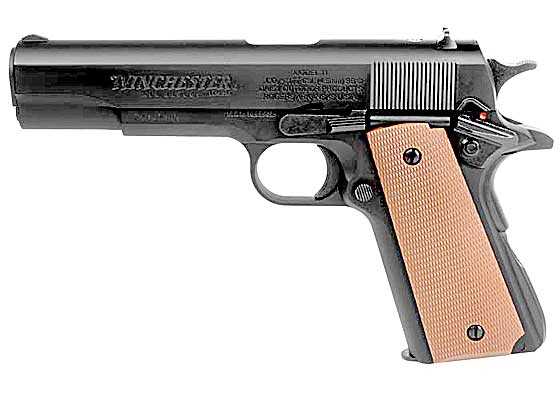 How and why guns wear out: Part 1