This blog post was mistakenly published a day early, and we got some comments to it before we discovered that. So, for those of you who try to be the first to make a comment, it looks like you’ve missed your turn!

• Scout scope on centerfire rifle
• My Mosin Nagant
• A powerful round
• What today’s test is all about
• What about the scope?

Scout scope on centerfire rifle
This is a special report I promised several readers who are interested in this UTG 2-7X44 Scout SWAT scope. When I tested it on an airgun, I used the Crosman MK-177 Tactical multi-pump pneumatic because it allowed me to mount the scope out away from the eye. That was a good test, but it was also a forced one because I could have mounted any scope on that airgun. Scout scopes are made for those troublesome arms that don’t allow the mounting of scopes in the conventional way. I asked Leapers to send me a mount for my Mosin Nagant 91/30 rifle — a centerfire rifle that needs a scout scope because of its straight bolt handle. While the bolt handle can be bent down to clear the scope, the scout scope is a non-gunsmithing solution that allows you to preserve the rifle in its original condition. Not that any Mosin Nagant in existence today is still in its original condition!

My Mosin Nagant
My 91/30 is built on an early action with a hex-shaped receiver. It didn’t start out as a 91/30 but was converted by an arsenal at some point in its existence. The markings on the metal parts tell a story of numerous overhauls and refurbishments over the past century. Some early marks have been removed by grinding and polishing, while others are new and fresh. The action was very possibly made in the 19th century, yet the barrel is like new, as are many of the metal parts and the wood. The Soviet Union made good use of these rifles and refurbished them as necessary after each conflict, not unlike many countries. As a design, the Mosin Nagant has been in continuous service longer than any other military firearm.

A powerful round
This rifle is chambered for the Russian 7.62X54 rimmed cartridge made for what the Russians refer to as the “Three-line rifle” — with a Russian “line” being equivalent to one-tenth inch. It refers to the bore diameter of the bullet. It was adopted as standard in 1891 and is still in limited service today.

This Mosin cartridge exists in numerous different loads. The current sniper round has a 152-grain bullet leaving the bore at 2700 f.p.s. The standard for accuracy at 300 meters is all rounds inside an 80mm (3.1-inch) circle. Of course, the standard military battle ammunition is less accurate — keeping 50 percent of its shots inside a 90mm (3.5-inch) circle at the same 300 meters.

What today’s test is all about
With such power must also come recoil, and that is what today’s test was for. I wanted to see that this scout scope could stand up to the punishment of a heavier recoil. I fired 20 factory rounds and 20 reloads through the rifle, which is not a very big test. But if there are any major weaknesses, they should show up. And they didn’t. After zeroing at 50 yards with the factory loads, I shot a 3-inch 10-shot group at 100 yards, and then rang the 6-inch gong at 200 yards with the remaining few rounds.

My reloads didn’t do as well as I’d hoped. The bores on these rifles can vary in diameter from 0.309 inches to 0.313 inches, so you really need to slug the bore to know what diameter bullet your rifle likes. I haven’t done that yet and was hoping to squeak by with some 170-grain lead bullets sized 0.312 inches, but it was not to be. I did manage to ring the 200-yard gong once out of 5 shots, but that’s not what I’d hoped for.

What about the scope?
You can see in the photo where the scope is mounted relative to my eye. My head looks very erect on the stock, which it has to be to see the scope, but the image fills the eyepiece. The target is sharp and clear, even at the top magnification of 7X. The reticle is thick enough to pick out quickly, even against the deep woods; and, of course, it’s illuminated, which is a blessing on a scout scope. 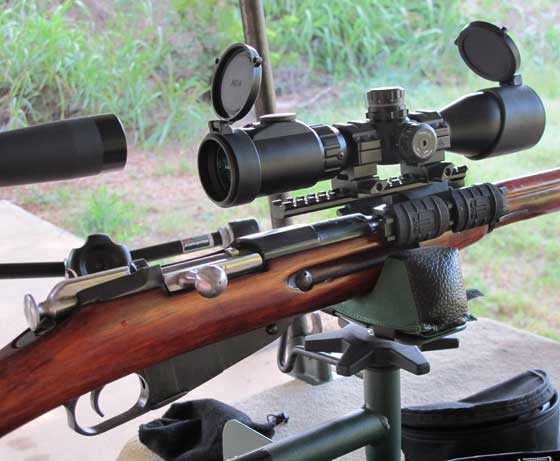 The UTG Mosin scout scope mount clears the action for loading and ejection. The straight Mosin bolt handle can be rotated up without interference. 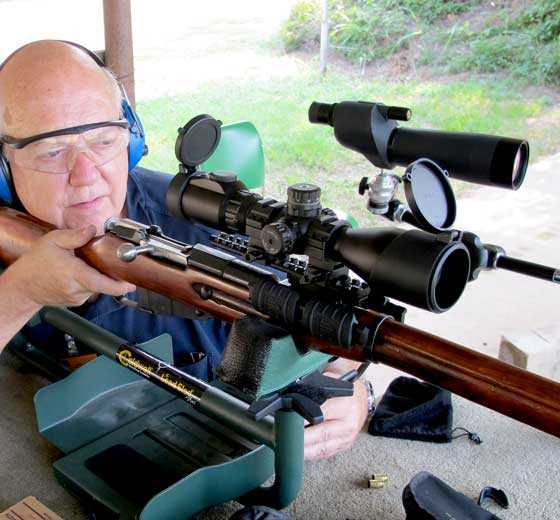 As you can see, my head has to be high on the stock to see the scope. This is due to the Mosin’s stock, which drops away, but the scout scope is also mounted very high.

The adjustments worked as they are supposed to, and I got on target very quickly at 50 yards. I used the old standard of removing the bolt and sighting through the barrel to align the scope. The first shot was about 4 inches from the aim point, which is excellent for this kind of rough sight-in.

The mount
I haven’t told you about the Mosin Nagant mount that Leapers makes. It replaces the rear sight blade and leaf, using the rear base to secure a Picatinny rail with 2 side rails. Rubber pads slip over the mount’s side rails to keep them from cutting your hands when you handle the rifle.

Removing the rear sight leaf and attaching this mount was very easy. It took about 20 minutes total to finish the job, which included removing the sight parts first. The instructions are clear and concise, even though they address two different sight base kits for rifles and carbines. Once on the rifle and snugged down, the mount is rock-solid. It remained solid throughout this test.

The base is a tri-rail system with Picatinny rails on both sides, along with the main scope rail on top. These can be used for anything like lasers and tactical flashlights, though on a Mosin Nagant bolt-action rifle such accessories seem out of place. Perhaps hog hunters would like a light, though.

Overall evaluation
I’ve now used this scope on two different rifles — both with success. The first was an air rifle, and the second was this powerful centerfire. This is the first scout scope I’ve ever tested or used, so I don’t have experience with the type — but I do know this one works as advertised.

I wondered if the image would be clear and easy to see, since the eyepiece is 10-11 inches from the eye. No worries there. The image is very large and bright, though your sighting eye can see things other than the target, if you want. Once you focus on the target and reticle, though, nothing else seems to matter.

If you need a scout scope, I can certainly recommend this one from the standpoint of functionality. The size and weight, though, are a different matter. This is a large scope that sits high above the barrel, so you need to give that some thought when making your decision. Most scout scopes are either fixed power or low-powered variables. I believe this one has the highest magnification on the market. If that’s important to you, this may be the best scope out there.