This Diana model 5 air pistol is marked as a Winchester model 353.

Today is accuracy day for the Diana model 5 air pistol I’m testing, which is labeled a Winchester 353. We heard from several owners who like their pistols, so let’s see what this one can do.

To get right into it, I didn’t know where the sights were adjusted. You may remember I mentioned that the rear sight was adjusted all the way over to the right. I decided to shoot the first group as the gun was set up. After that I could adjust the sights. All shooting was done from 10 meters with a 2-hand hold and my arms rested on a sandbag. I used a 6 o’clock hold.

The first target was shot with RWS Hobby pellets. They fit the breech tight, with the skirts not entering the barrel completely. They hit the target high and to the right. That told me that the rear sight is adjusted too far to the right.

Ten Hobbys went into a vertical group that measures 1.635-inches between centers. I didn’t know what to expect from this pistol, but this is a larger group than I imagined. 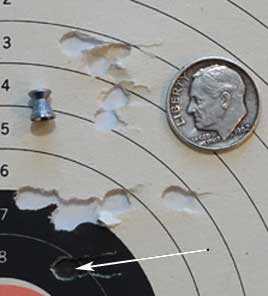 Ten RWS Hobbys made this 1.635-inch group at 10 meters when shot from the Diana model 5 pistol. There is a hole in the bull at the bottom (arrow).

First, the trigger is very light. It doesn’t stop at the second stage, so when you’re on it expect the gun to fire at any time.

I was able to adjust the rear sight to the left, but it was already set as low as it would go. So I had to live with where it impacted the target.

The front sight is a tapered post. It’s not ideal for precision shooting and I’m sure some of the openness of the groups is due to that. The rear notch is square and screams for a square front post.

The second pellet I tried was the Air Arms Falcon. These struck the target just left of center, but were still too high. They made a group that measures 1.399-inches between centers. 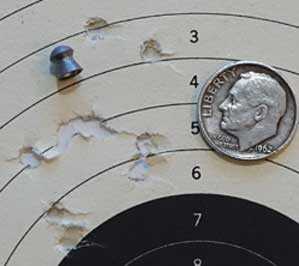 Falcons fit the breech loose, but not so loose that they presented a problem. I rather enjoyed loading them.

Next up were Crosman Premier 7.9-grain domed pellets. These fit the breech snug, but they loaded easily. I had high hopes for them and they didn’t disappoint. First of all, they went to the exact center of the bull. And they struck much lower, with at least 5 of them landing in the 9- and 10-rings. Nine of the pellets landed in a 1.276-inch group, but a stray shot opened that to 2.203-inches. I believe that shot was caused by an aiming error and is not representative of the accuracy of this pellet. Although this was the largest group, I do believe this is the best pellet I tested. 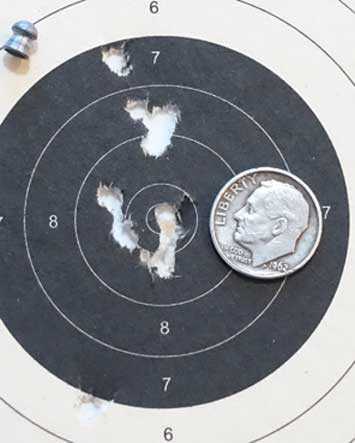 Premier lites were well-centered and made a 2.203-inch group. Nine went into 1.276-inches, which is more representative, I believe.

The final pellet I tested was the Qiang Yuan Training pellet. I expected great things from this pellet, but it didn’t perform up to my expectations. Ten pellets went into 1.773-inches at 10 meters. This pellet fit the breech the loosest of all 4 that were tested. 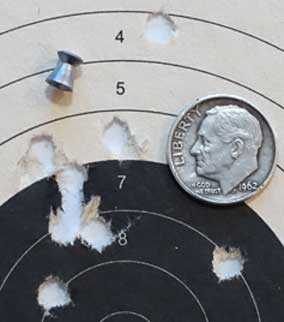 Qiang Yuan Training pellets didn’t do as well as I expected. Ten went into 1.773-inches at 10 meters.

Well, what do I think of the Diana model 5? For starters, I was surprised that it didn’t shoot better. I know it’s not a target pistol, but in light of what the BSA Scorpion pistol was able to do a couple years ago, I expected better.

I think Diana missed the mark with the sights they put on this pistol. Or, more correctly, Winchester missed it by not specifying a better front sight.

The funny thing is, the model 5’s brother, the Diana model 6, is very accurate. And the model 10 target pistol is a flyswatter! Maybe because the 5 recoils it’s just too much to handle.