Today I start my review of the Hatsan BullMaster precharged pneumatic air rifle. This is a repeating semiautomatic air rifle in bullpup configuration. It is available in both .177 and .22 calibers and the published energies, 21/31 foot-pounds, respectively, are right where they should be for a handy hunting air rifle. I am testing the .22, but since it was sent directly from Hatsan, I won’t publish the serial number. Your chances of getting this particular airgun are slim.

I tested the Sortie semiautomatic air pistol for you in a 5-part review back in September and October, and I did it intentionally. I had this BullMaster at that time, and since the actions of the two airguns are so similar, I wanted to start with the smaller one first. Testing the Sortie got me ready for the BullMaster.

The Sortie I tested was a 14 foot-pound airgun. That’s suitable for hunting, but I think the greater power of the BullMaster makes it an even better choice. We discovered in testing that the Sortie is quite accurate, when the right pellets are used. The Sortie likes H&N Baracudas with a 5.50mm head, so I will be sure to include them in the testing of this rifle.

A lot of readers want me to compare the airguns I test with other airguns they know. I don’t do that for a good reason. All airguns are not alike and there can be variations within a certain model and caliber of gun. Who knows whether the rifle you buy will be the same as the rifle I test? Some manufacturers hand-select airguns for tests that they know will be published. I have no control over that. So, when I test an airgun, it’s just that one gun I’m reporting on — not the entire line and not every example of that model.

Over time you will see that certain manufacturers tend to produce guns at the same level. A test of one can be extrapolated to others of the same type. But other manufactures do not have a good track record for consistency. A test of one of theirs only tells you what that specific airgun will do.

However — you readers can think for yourselves. So, when I tell you a certain airgun produces 31 foot-pounds at the muzzle, you can compare it to tests of other airguns that produce similar power. The same holds true for shot count, accuracy, the quality of the trigger and any other objective specification you can name. It’s more work for you, but I try to give you as much information as I can to make that evaluation.

I will not name names, but I have seen airgun companies change the quality of their products over time. It works both ways — some getting better and some worse — and is a reflection of who is in change in the company at the time. Having said that I will now say that Hatsan precharged airguns have a very solid reputation for quality, accuracy and honesty in advertising. If they say the BullMaster produces 31 foot pounds in .22 caliber, that’s what I expect to see when I test it.

The BullMaster is a 10.3-pound repeater. Yes that is heavy and yes, when you mount a scope it will be even heavier. But that’s why Hatsan installed sling swivels at the factory and also why they provide a Picatinney mount on the bottom front of the forearm for a bipod. I plan to use it!

The overall length of the rifle is a compact 30.9 inches. That makes it very compact and emphasizes the weight. Still, the bullpup design allows for a 19.7-inch barrel inside the full shroud.

The sculpted rubber comb adjusts up via a spring-loaded button on the left side of the butt. It’s already high at its lowest position, but after I mount a scope I may need some adjustment for good eye alignment. The description says the stock is ergonomic and after some examination and handling I have to agree, though I will need some time behind the trigger to know better.

The magazine is the same one we saw with the Sortie. In .177 the magazine holds 14 pellets, and in .22 it holds 12. The stock contains the action, which is typical of the bullpup design. A bullpup is a rifle whose action is set back at the rear of the gun, so the overall length of the rifle can be as short as possible. The shrouded barrel should keep the report quiet, and I will be reporting on that as the test advances.

The BullMaster accepts a fill to 250 bar, which is 3,626 psi, so it’s not a gun to fill from a hand pump. You will want a large large carbon fiber tank to fill this one. Hatsan has their proprietary fill probe that they package with the rifle, but I have made a universal adapter by attaching an Air Venturi adaptor that has a male Foster connection on the other end.

Not only is the reservoir filled to 250 bar, it also holds 500cc. That combination should give a good number of shots. The description on the Pyramid Air website says 60 for .177 and 50 for .22. I will test that for you, as well.

You can look all over the rifle and never see the onboard pressure gauge. It’s hidden deep inside the hollow pistol grip on the forearm. It’s small and a little hard to see, but I imagine after you get familiar with the rifle it won’t be a problem to know how many shots remain.

The BullMaster comes with three magazines. Two are stored in the rubberized synthetic stock (you can see one in the picture) when the third one is in use. The shot count will be important because there may be enough shots on one fill that a hunter needs to carry nothing besides three loaded magazines. I’m hoping that is the case.

There are no open sights on the rifle so an optical sight of some kind will be required. As you can see in the picture, the BullMaster receiver top is a Picatinney rail, so either mounts for that or Weaver rings will attach. But Hatsan has also made an 11mm dovetail on the same platform, so the choice of scope rings is a big one. The bullpup style means the scope will have to be mounted high. And after examining the rifle I can see that a shorter scope is going to be best. I am thinking something in the 4-12 compact category, but we’ll see. 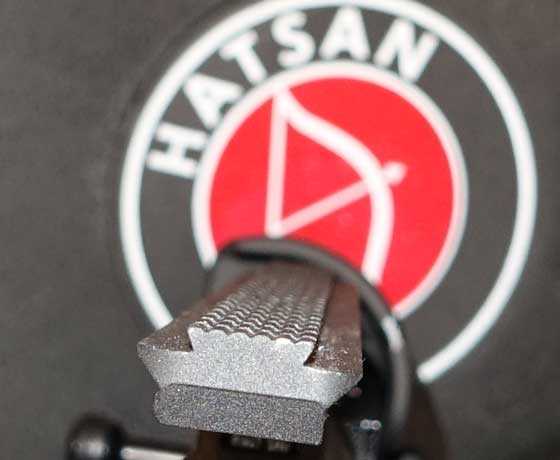 The clever scope rail accepts both 11mm and Weaver/Picatinney rings.

Bullpup triggers need long linkages because of the design. The trigger has to function at the action, which is under your face, but your trigger finger wants to be a comfortable distance from your shoulder. That long linkage usually means some degradation in the feel of the trigger, so I will be focusing on that in my report.

The BullMaster is semiautomatic, so after the magazine is loaded and the first pellet is chambered all you have to do is pull the trigger until the magazine is empty. I liked that feature on the Sortie and I think I am going to love it on the BullMaster — with the difference being that this rifle is steadied against my shoulder, where the Sortie is held in two hands with no shoulder contact.

So much more to tell

Examining the BullMaster, I can see that I am only scratching the surface of this very different air rifle. You can see in the first picture that the stock is entirely different than a conventional rifle stock, so of course the hold will be, as well. I can see and feel that right now, but it’s kind of like sitting in a new car in the dealer’s showroom. It seems one way as you just sit there, but until you get it out on a test drive you really don’t know a lot. I need to get some trigger time before I can comment on many of these things.

Right now the rifle feels large yet also compact. It feels heavy, but maybe in a good way. The stock fits different than a conventional rifle, but I can’t tell whether or not it’s a good different. I have to get some time on the trigger.

My next step will be to shoot the velocity test. That doesn’t really meet the need for trigger time, but it does familiarize me with the rifle’s operation. The time I spent with the Sortie has also helped. All in all, I am going to enjoy this test.