Home > Blog > PCP > The difference between strikers and hammers

Today I want to explore a gray area in airguns. It’s gray because airguns operate differently than firearms, so we will begin our discussion with firearms for better understanding.

Firearms are devices that launch projectiles by means of a chemical explosion. To start the explosion there needs to be some kind of initiator. In the beginning, when the gunpowder that we call black powder was in use, all it took was a spark or a hot coal to start the explosion.

What is an explosion?

An explosion is a violent expansion of gasses. Pop a balloon and it explodes. Anything that burns can explode under the right circumstances — even dust. The flour that bread is made from can explode so violently that it can kill people and even level huge buildings.

An explosion requires the right conditions. A handful of black powder placed on a tree stump and set afire will burn in a flash but will not usually explode. Confine the same powder to a vessel that restricts the expansion of gas, though, and the explosion will be quick and powerful.

What starts the burning?

If we are talking about black powder, heat starts it burning. Even a small spark can ignite it and, once the burning begins, it spreads to the neighboring particles of powder at a speed of 8,000 to 11,000 f.p.s. HOWEVER — if the black powder IS NOT packed tight and there is air space in-between the powder granules (but the powder is inside a container) the speed of ignition increases, often producing so much pressure that it blows the container apart!

Smokeless powder, on the other hand, burns very slowly when it’s loose and in the open, but extremely fast when confined. It actually burns much faster than black powder when it is tightly confined.

Now let’s look at a video demonstration of the relative burn rates for smokeless powder and black powder when both are burned in the open.

Black powder can be ignited by just a spark. That’s what makes the flintlock possible. The piece that held the flint was called the cock in the beginning, because people thought it looking like a rooster with something in its mouth, as it “pecked” at the frizzen. As time passed, the term hammer crept into the vernacular and both cock and hammer were used until the end of the flintlock era, around 1830-45.

The cock, or hammer, has fallen against the hardened steel frizzen, both pushing it back out of the way and striking sparks from it with the flint. Some of the sparks fall down into the pan where the priming powder is and they set it off. Part of the fire from that small explosion moves through the vent hole into the main powder charge at the rear of the barrel.

Here is a video that shows a flintlock in operation, in case you have forgotten.

In the early 19th century (CA 1807) mankind learned how to create sufficient heat to ignite black powder by means of a secondary explosion that was set off by concussive pressure. The percussion system was born.

To create the percussion that ignited the explosive material required the hammer that had held the flint to be turned into a hammer that could smash. Instead of a touch hole, a nipple with a hole in it provided the anvil that the percussion cap sat on. 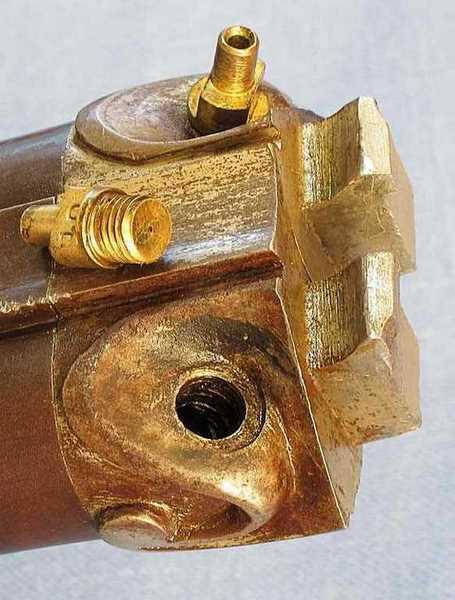 The nipple is the anvil that the hammer smashes the percussion cap against. The hole directs the fire from the cap’s explosion down onto the powder charge in the barrel.

Percussion caps were not hot enough to set off smokeless powder reliably, plus the nipple they used allowed gas to escape. Smokeless powder burns too slowly to explode when there is any possibility for the gas pressure to escape, so a new system of ignition had to be invented — the primer. The primer worked in conjunction with an enclosed copper cartridge case (later brass) to contain the gas pressure, allowing it to increase to explosive levels.

I have told you all of this to make the point that the first smokeless powder cartridges were ignited by a hammer that looked very similar to the percussion hammer. But this new hammer either contained a firing pin to smash the primer directly, or it may have hit a separate firing pin that then hit the primer. 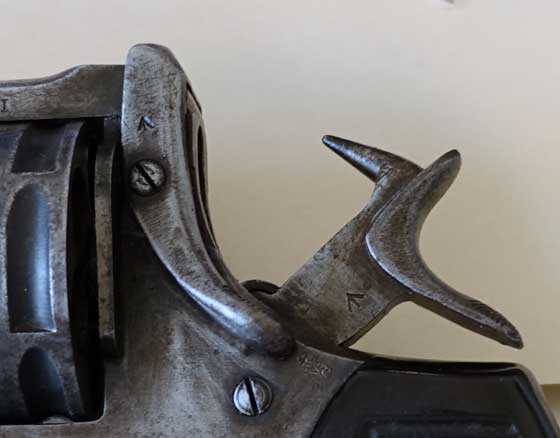 Early hammers, like the one on this 1916 Webley Mark VI revolver, show how focused the designers were on crushing the primer! Nothing prevents this hammer from directly crushing a primer. 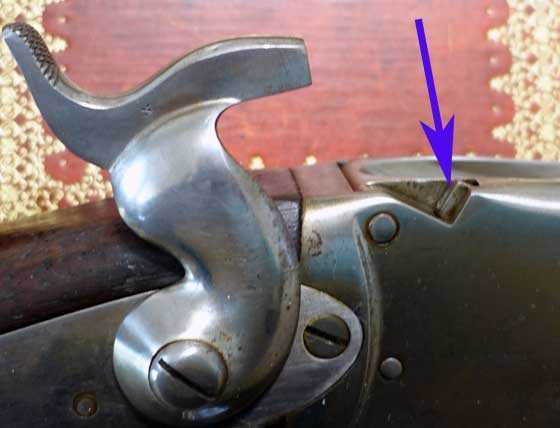 This 1867 Peabody rifle, the forerunner of the Peabody Martini, has a heavy hammer that’s powered by a strong leaf spring. The firing pin (arrow), however, is separate and spring-loaded to stay away from the primer until the hammer drops.

As time passed hammers became less obvious, though they still performed the same function. On the M1911 Colt pistol the hammer is still visible, if smaller, and the firing pin is still spring-loaded to keep it away from the primer.

The M1911 hammer is smaller but still functions the same, and the firing pin (arrow) is still spring-loaded for safety.

It is possible to hide the hammer inside the gun. You don’t see a hammer on the M1 Garand, the M1 Carbine or the M16, yet all three rifles have one hidden inside their actions. These hammers might not look exactly like external hammers, but their functions are identical. 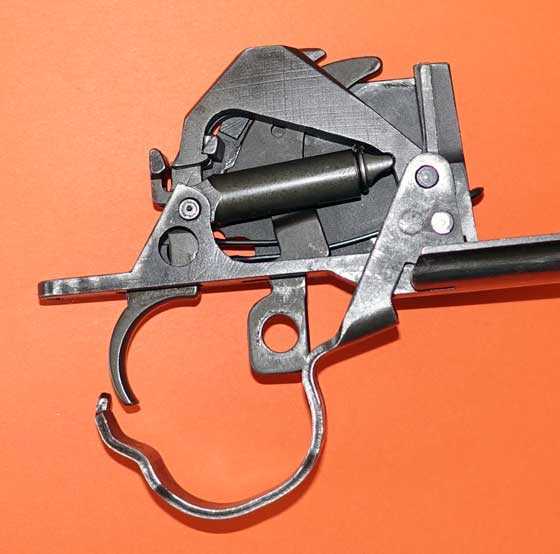 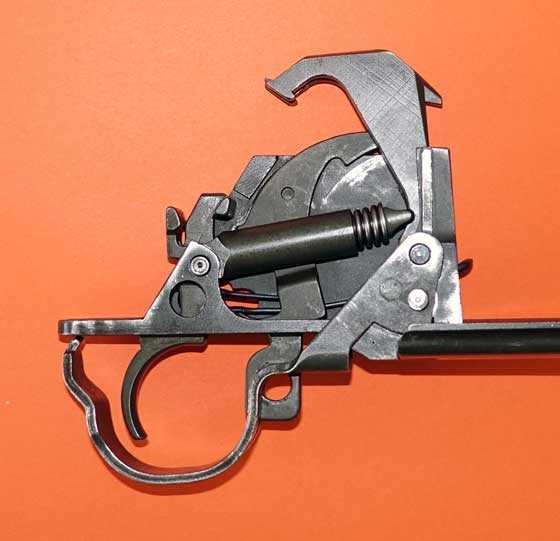 The hammer is fired.

What, then, is a striker? It’s a firing pin that has a spring on the other side. The spring doesn’t keep the pin away from the primers, it pushes it towards them. It STRIKES them without being pushed by a hammer. When a striker gun is cocked, the striker (firing pin) is caught by the sear and when released it’s pushed forward by the striker spring to hit and crush the primer in the cartridge.

I could show you a gun with a striker, but you wouldn’t see anything. The striker/firing pin is buried deep inside the action.

I could also give a list of the advantages of each type of mechanism, and there are some for each, but that’s not what this report is about. Now that you know the difference between hammers and strikers, let’s talk about how these terms apply to airguns. Airguns don’t have primers, so what does a hammer or striker do?

In pneumatic and gas-powered airguns, the valve stem performs a function similar to a primer, but it’s not identical. A firearm primer first explodes, and the heat from that ignites the gunpowder. That’s two separate actions. In an airgun, the valve stem opens the valve to exhaust pressurized air or gas. That’s just one action. What, then, should we call the “thing” that hits/strikes the valve stem to knock it open? 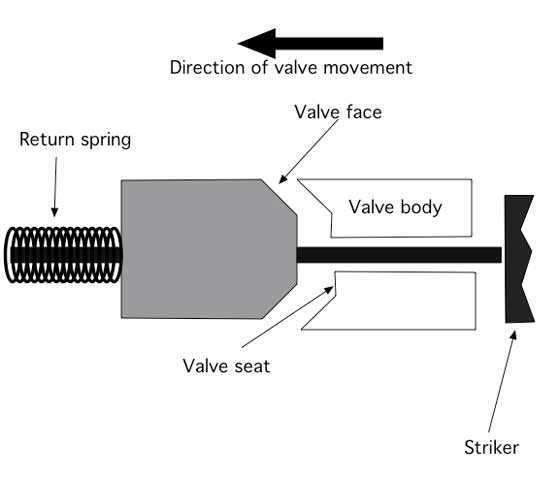 The knock-open valve needs something to hit its stem. I call it a striker here, but if I called it a hammer it would do the same thing.

On some airguns the answer seems easy. If it looks like a hammer and does what a hammer does, it’s a hammer. I have no problem with that. 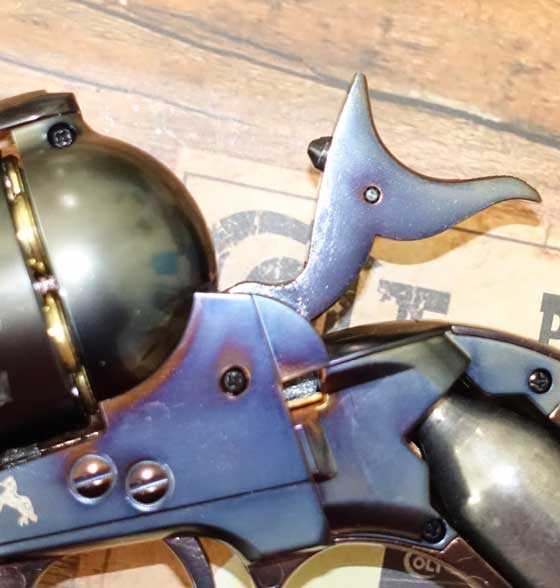 This Umarex Colt Single Action airgun hammer sure looks like a hammer to me!

But AirForce Airguns calls the cylindrical thingy that slides back and strikes the valve cap on their smallbore rifles a striker. And it doesn’t actually hit the valve cap. It hits the bolt and the impulse of the hit travels through the Delrin bolt and impacts the valve cap. Does that make the bolt a firing pin? Hardly. 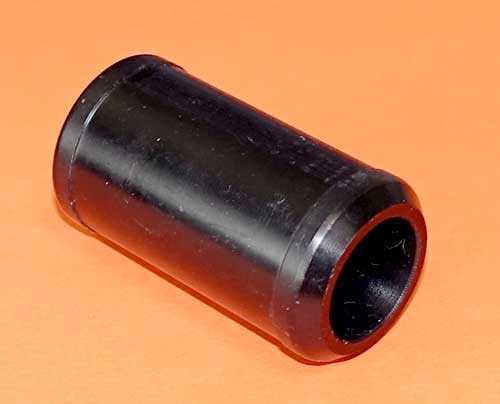 This old AirForce striker is made from Delrin and slides over the barrel to impact the bolt. This one is probably obsolete, but it should be similar to what’s used today.

Today’s report doesn’t prove anything. It’s just a discussion of what a hammer is and what a striker is. It makes sense as long as the discussion stays with firearms. When it crosses over to airguns the definitions get blurry in a hurry, as we have seen today.

Because a valve stem does not do exactly the same thing that a primer does, the definition of the thing that actuates it is also not clear. Call it a hammer and I don’t think you’re wrong. Call it a striker and you are just as correct. 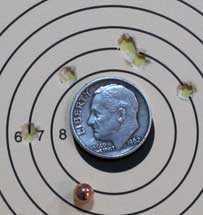