We have now looked at the Daisy model 105 Buck BB gun. We’ve seen its velocity and we have seen its level of accuracy with the factory open sights. Today we begin to look at the reason for the report. Today we look at mounting a scope on the gun, using the Little Buck Rail from Buck Rail.

The Buck Rail is a synthetic adaptor that fits a Daisy Buck BB gun to provide a MIL STD 1913 Picatinney rail for mounting an optical sight.

Reader Terry Harman asked if I would be interested in reviewing the scope base his company makes. I had already tested a scope base for the Daisy Red Ryder back in 2016, and there was enough interest that I thought I would see what Terry’s company makes. I’m glad I did because it is very different from the previous mount I tested.

When I first saw the rail I wondered how it had been made. It wasn’t machined yet the angles and cuts were precise. Then I read the website and discovered that it was printed on a 3-D printer. I think this is the first time I have seen a 3-D printed part sold for retail. I’ve seen plenty of them used for testing, but never as the finished product. Let’s take a look at the design.

One end fits over the Buck’s rear sight. But it isn’t a simple slip fit. There is engineering involved so the fit is solid, once the part is in place. Let’s look at it. 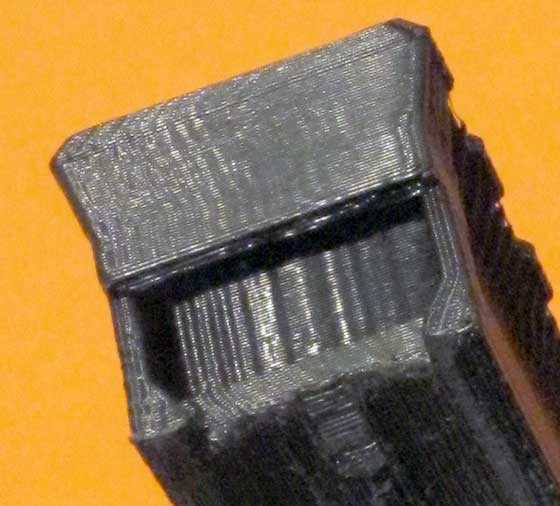 The Buck’s rear sight slides up into that slot you see here, but it isn’t just a simple slip fit. There is a ledge at the base that presses against the rear sight once it’s in the slot, so the fit is very tight! 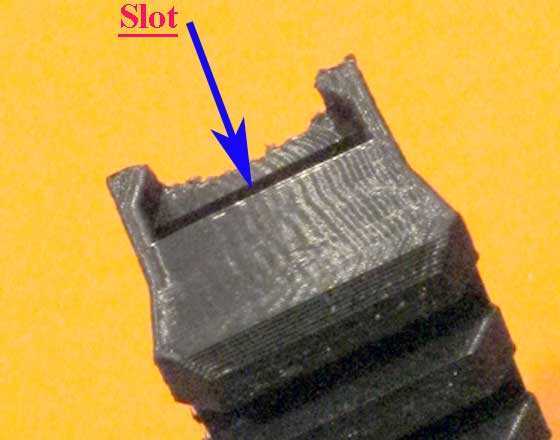 You’re looking at the rail from the other side in this view. The rear sight fits into the slot (arrow) and here you can see the ledge (the arrow passes through it) that presses against the sight.

To mount the rail on the Buck you first need to unscrew the Phillips wood screw located at the top of the pistol grip. Remove the screw from the gun. 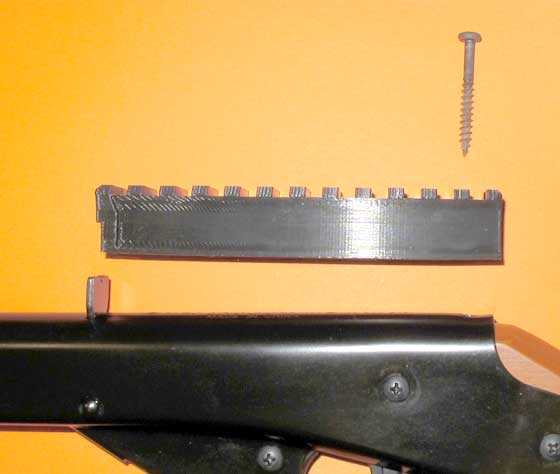 This is how the Little Buck Rail fits on the gun, but not how the rail is installed. 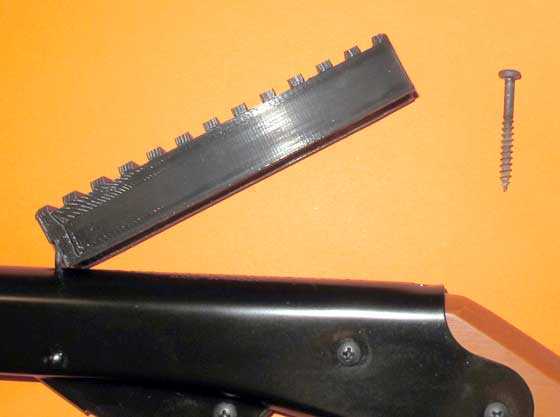 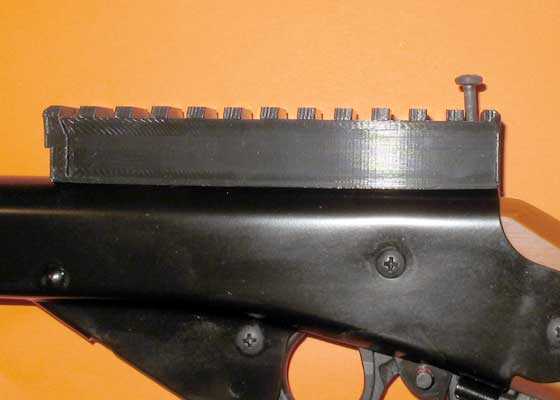 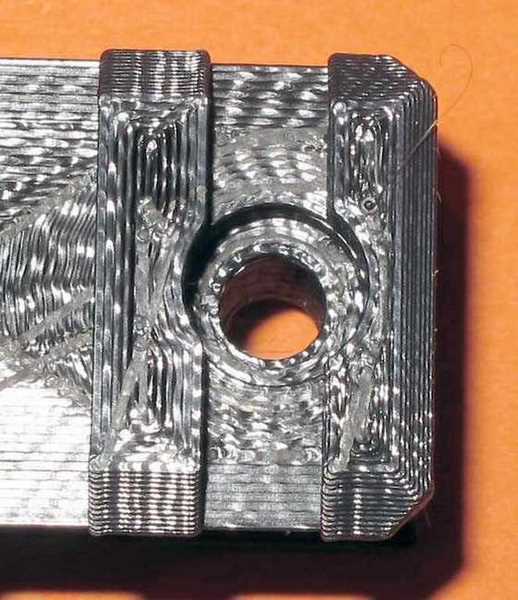 The hole in the rail that the screw passes through has a recess for the head. So when the screw is down all the way the head is out of sight.

The wood screw is not going back into the gun’s stock as deeply as it was before. But the taper of the screw shaft is very gradual, so there will be plenty of wood for the screw to grasp. Just don’t tighten the wood screw too much or the hole will strip out. 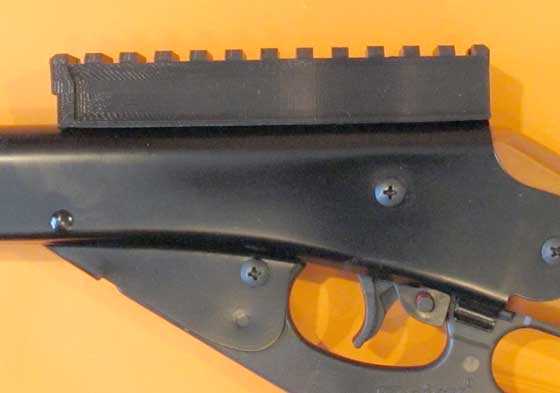 The rail is now tight against the top of the gun. It’s ready to accept scope rings.

When I examined the rail I thought it was probably an exact MIL STD 1913 Picatinney rail — not a close copy that you see on many scope rails today. MIL STD 1913 is an interface MIL STD. It describes the fit that any scope or optical sight mount must attach to. The thing about it is you are going to need scope rings that will attach to a real MIL STD 1913 scope rail. Just be aware there are many that won’t do it — even though their packaging says they are for Picatinney rails.

To illustrate what I mean, I measured one of the slots that cut across the rail. It should be 5mm in width. Let’s see. 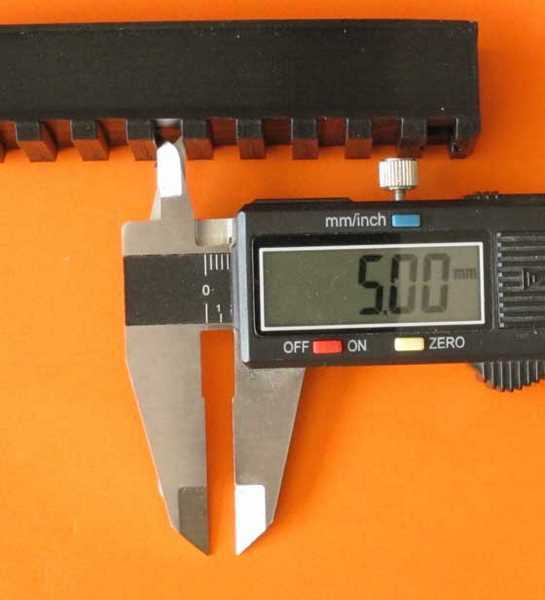 I’m measuring the width of one of the rail’s slots. They are supposed to be 5mm.

When I saw this measurement I figured the MIL STD specifications had been used in the 3-D printer to create this rail. That’s easy enough to do. Well, that is where some scope rings that don’t exactly meet spec will have problems.

The first scope mount I attempted to install on the rail did not have legs long enough on both sides to reach down over the rail and clamp. I spent 45 minutes with this ring set, thinking I was doing something wrong, before realizing the ring was not really produced to MIL STD 1913.

Oh no, the sky is falling.! Now we need an expensive set of scope rings!

No — you don’t. I decided to show you how easy this really is. 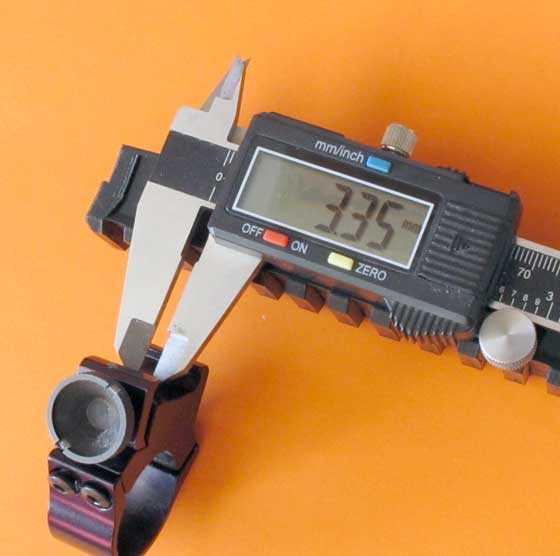 I’m measuring the width of the crossbar under this Weaver ring. It will fit into a Picatinney rail with room to spare.

Won’t the rings move around?

Since the crossbar is smaller than the slot, won’t the rings tend to move back and forth on the rail? No. In a centerfire rifle, recoil will keep the ring’s crossbar or key butted up firmly against the back of the slot. On a BB gun, the ring can be held in place by clamping pressure, alone, as it would be on a rimfire rifle. This is why you can use Weaver rings with Picatinney bases. I wrote a whole report on this 14 years ago.

For this BB gun you need a scope that won’t be out of focus at close distances, because BB guns don’t shoot that far. That means either low power or a scope that focuses (parallax adjusts) very close. And we all know there is one scope that adjusts closer than any of them — the Bug Buster! It focuses down to 3 yards or 9 feet. I selected a Bug Buster 3-12X32 for the test. It had a UTG 80mm Sidwheel add-on already mounted and I thought, “What the heck? As long as we’re scoping a BB gun, let’s have some fun.”

The scope mounted in the one-inch Weaver rings easily enough and when I was finished I had something I never thought I would see — a scoped Daisy Buck! 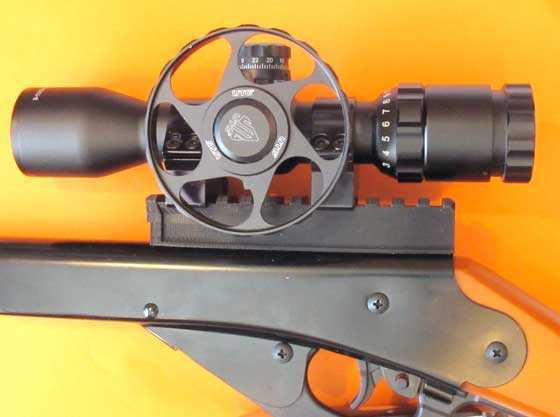 The Daisy Buck is scoped and ready to go!

A lot of thought went into this scope rail, and while I do not believe new shooters should be allowed to use a scope until they can use open sights, that’s just my opinion. Plenty of people want to scope their guns, even their BB guns. I remember back in the 1960s, I would have scoped my BB guns if I had the money. I thought scopes meant more accuracy, period. I think a lot of people today believe they do.

In the test I did scoping the Red Ryder, the gun actually was more accurate with the scope. So maybe this is a good thing. All I can so so far is this Little Buick Rail is certainly well thought out and seems to be well made.

We have the baseline on the Buck with open sights. Accuracy with a scope is next. And given the scope I am using, I think the Buck is getting its best chance to shine.

There is one more thing I want to show you, but it will come in the next report. I can’t wait to hear what you think! 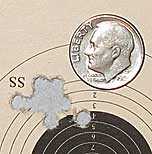