This is Part 1 of my report on the Beeman P3 air pistol, but you will recall that I have already written 5 reports on the very similar looking Chinese-made Beeman P17 pistol Parts 1 and 2 of that report were a guest blog written by reader 45Bravo about fixing and resealing the P17. In these reports we learned the two most common problems of the P17 and how to fix them. So this has already been a valuable series — at least for me!

I normally don’t compare one airgun to another, but I’m making an exception for the Beeman P17 and Beeman P3. I’m doing so because the Chinese copied the Beeman pistol without regard to propriety or the manufacturer’s rights. And everyone, including me, wants to know how good a job they did. Is the $30 P17 a perfect knockoff of the $230 P3, or have corners been cut?

Why are they both Beemans?

There is a more fundamental question to be asked first. What gives the Chinese the right to not only call their air pistol a Beeman P17, but to put that name on its molded top half? The answer is simple — they bought the company! The Beeman company is owned by Chinese proprietors — Industry Brand of Shanghai. Read about it in Part 2 of “A brief history of Beeman and Air Rifle Headquarters”.

So why does Beeman continue to offer both the inexpensive P17 and the far more expensive P3 that competes with it? Well, the P3 isn’t produced by Beeman. It never was. Beeman never produced any of the guns that bear their name when they were American owned. The P3 is made by the Weihrauch company of Germany, and they sell it worldwide as their HW40. The P3 could go away and the HW 40 remain and it would still be possible to get the airgun. But at the time of this publication, both the Beeman P17 and P3 are being sold by Pyramyd Air.

Today begins a full report on the Beeman P3. There was a report on the P3 done back in 2010 by my late friend, Mac. I was recuperating from a long stay in the hospital and Mac was feeding me reports to keep the blog going. I had never owned a P3 and had only fired one a couple times before now. But when I saw the interest that 45Bravo’s guest blog generated, I went on eBay and bought a used P3 to complete this series. Let’s examine that now.

I bought this pistol on eBay, and there were several to choose from. I bought this one because it came with a Millet SP1 red dot sight that quick research told me was obsolete, but a $229.00 retail when new. The ad said that both the gun and sight worked well, so I bought it. Oh, and did I mention that it came in the original Beeman box with the manual and other papers? And also this P3 was made before Weihrauch went to fiberopotic sights. So — this is a gem; a hidden treasure! 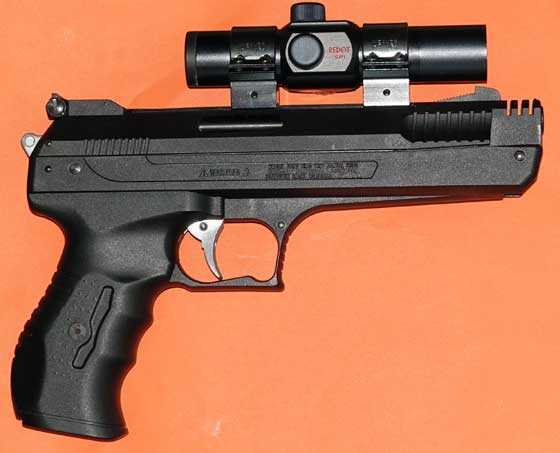 My Beeman P3 came with a Millet SP1 red dot sight. There is room behind the sight to grab the upper slide and pump the gun.

Naturally the first thing I did after unpacking the gun was shoot it through my chronograph, where I discovered the gun shot like new. But I wasn’t worried about that. 45Bravo had already told me how to fix it if I had to. It does shoot strong and we’ll find out how strong in the next report.

Okay, we have come to the first comparison. Like many of you I thought the Chinese had skimped on the materials to build the P17. So I examined both guns closely, side-by-side. To my great surprise, the differences were not that great. The black synthetic material that comprises most of the two guns appears identical. I expected the P3 to be finished better than the P17, but both are finished exactly the same. Except for the numbers and letters on both sides of the gun I can see no differences in the synthetic parts.

The metal parts are a different story, but the differences are quite small and require careful examination to spot. First, both the air cylinder that forms the compression chamber and the piston that compresses the air when the top slide is pumped (these are both single stroke pneumatic pistols) have different finishes, and surprisingly the P17 metal parts appear to be finished smoother than the same parts on the P3. The P3 parts appear to be either as the metal was received from the supplier or rough tumbled. The same parts on the P17 appear to be machined smooth.

The exterior of the P17’s compression tube (right) is finished smoother than that of the P3.

However, the screw that clamps and locks the pivot pin through the end of the piston rod to the upper slide is recessed on the P3 and left proud on the P17. The P3 looks like a more finished part. 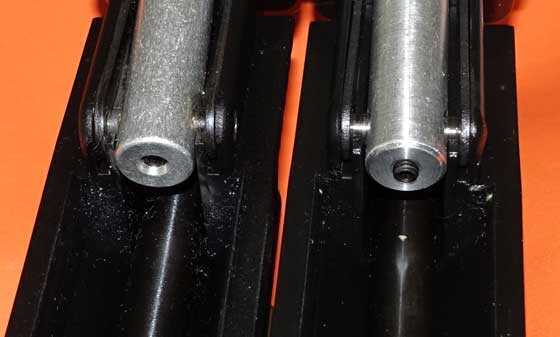 On the other hand, the P3’s pin-locking screw (left) is recessed, while the P17’s isn’t.

I will guess that both pistols pump with the same effort, or within a pound of each other, but the P3 is noticeably smoother to pump. The P17 reaches a peak during compression that’s harder to push through, while the P3 slide never hits that peak. Both pistols fire with an encouraging snap. My P17 shoots deep-seated RWS Hobby pellets at an average 401 f.p.s. I will chronograph the P3 in the next test so we can compare.

As I mentioned the front sight on the P3 is a post with a square top and no fiberoptics. The post sits atop a low ramp. The P17 front sight is identical because it, too, is an older airgun. If you buy either pistol new today you get fiberoptics, front and rear. 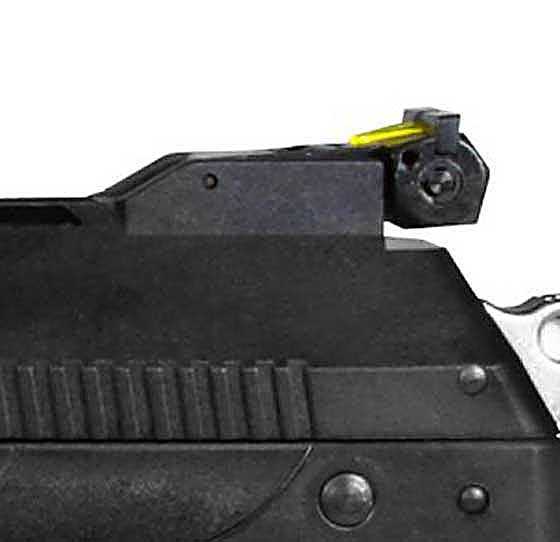 The current P3 rear sight has a fiberoptic tube. 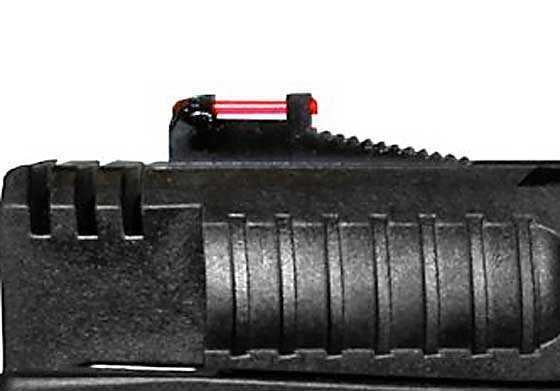 The current P3 front sight also has a fiberoptic tube.

Now we come to the biggest difference between the two pistols. Both have what appears to be an adjustment screw in the center of the trigger blade.

The P17 trigger is two-stage and, while the manual doesn’t come out and say that it is adjustable, it is. The manual simply recommends that you take the gun to a gunsmith to adjust it, as improper adjustment can make it unsafe. The P3 manual says the two-stage P3 trigger is not adjustable.

That’s our first look at the Beeman P3. As you can see, the P17 resembles it more than a little. I’m leaving the red dot sight mounted until I test the pistol for accuracy, then I might take it off and test the gun with its open sights. I haven’t decided that far ahead yet.