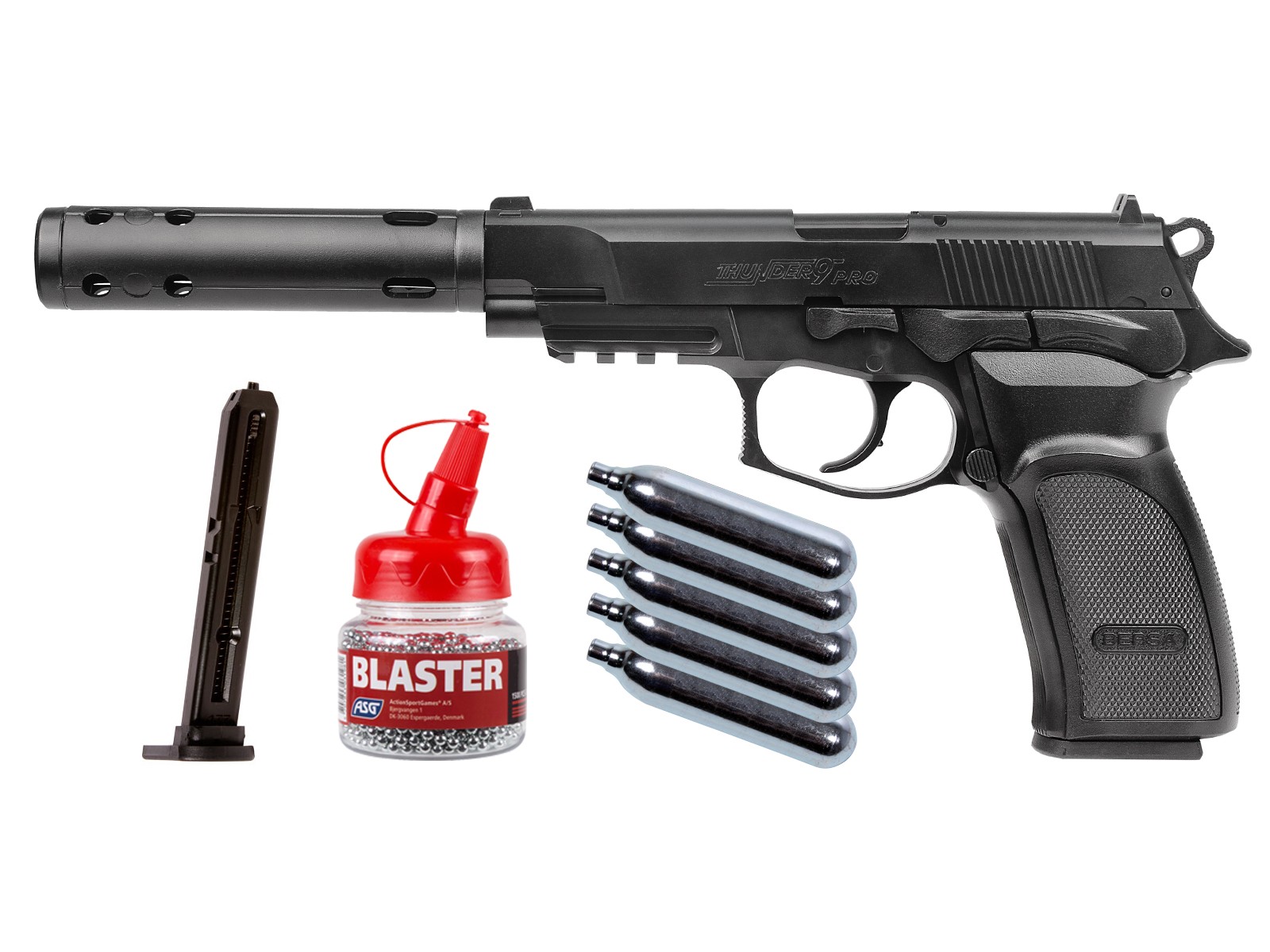 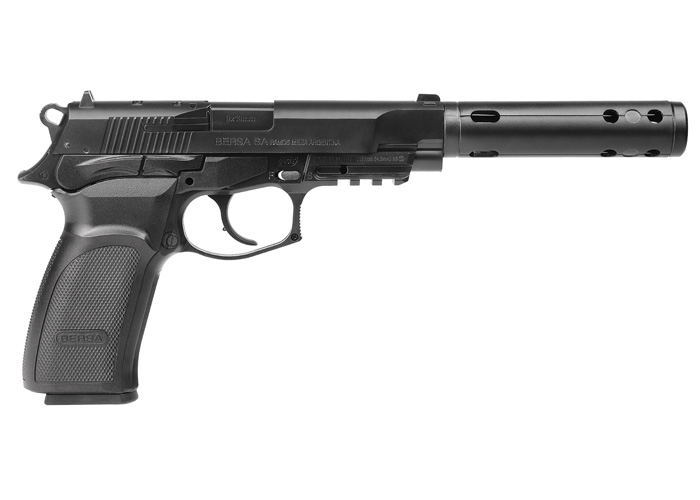 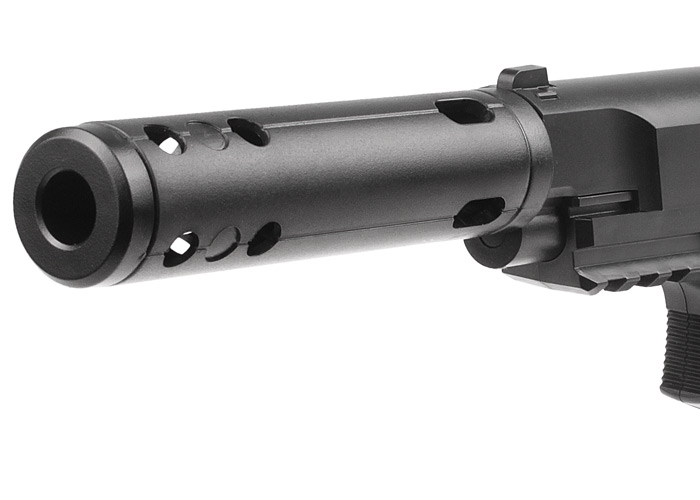 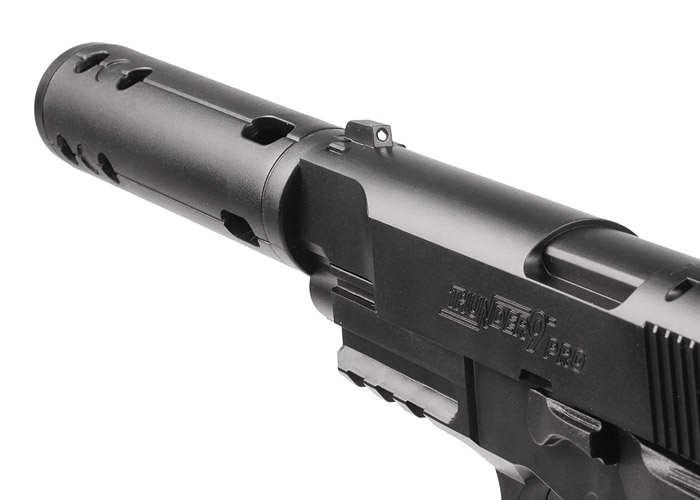 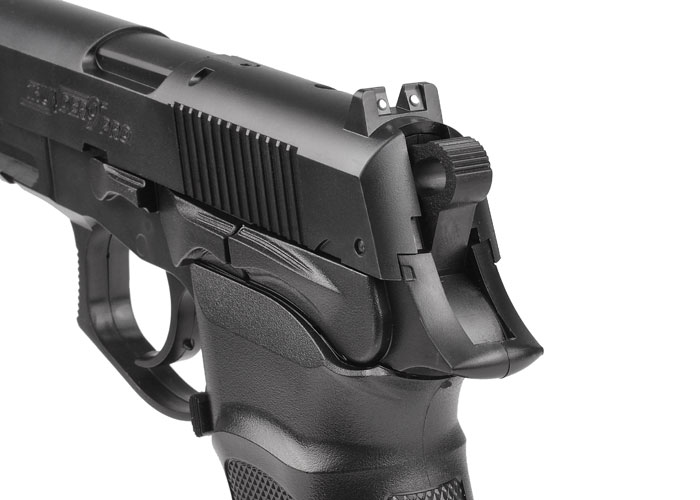 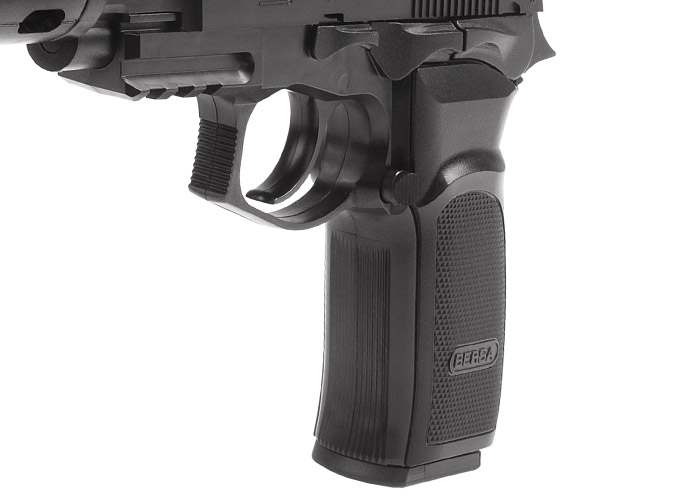 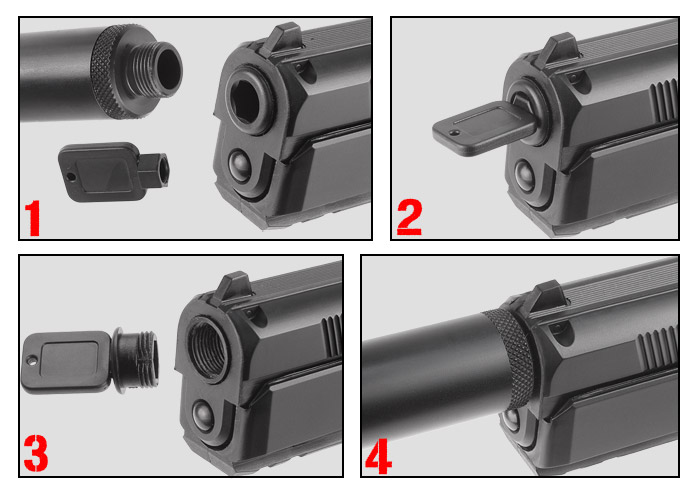 See other products by Bersa

Beautiful replica of the Bersa Thunder firearm developed for military and law enforcement.

This BB gun will give you the look and feel of the firearm, which makes it ideal for maintaining firearm proficiency without the cost of loaded ammo or the inconvenience of having to go to a range to practice. Of course, you don't need a reason to buy this gun. Get it just because you'll have a blast shooting it!

Remember to buy some Crosman Pellgunoil and put 1-2 drops on the tip of each CO2 cartridge before you insert it in the gun. Each shot will spray this protective oil into the gun, lubricating the seals. Shooters who follow this procedure end up with non-leaking guns that function flawlessly for decades.

This great kit includes everything you need to load up and start shooting within minutes of opening the box. We won't be a bit surprised if this becomes your go-to pistol for fun at the range!

See other products by Bersa

My fault for not doing more research. Surprised it's all plastic , except for the magazine . Wanted a threaded muzzle soooo bad ! And had the faux suppressor came with it. So goodie. But it's plastic also. I chose the wrong one evidently. I wanted smooth metal . I knew it wasn't blowback . But since I was able to get a Sig Sauer P226 pellet pistol for only 20 dollars more . It is however a fun toy and with a scope and a light/lazer combo it looks !pretty sweet .Point of it all is spend the extra money and research time to get what you REALLY want .

Nothing that hind sight hasn't fixed . Thanks

I've never been able to get the bb pushrod to release after filling up the magazines !!!

Include an extra mag (2 extra total) and don't include the muzzle extension.

Just buy it you won't be disappointed.

I am rating this product within its price point. Appearance wise it looks okay but it is molded plastic and therefore lacks any details to give it an authentic appearance. There are no working parts other than the trigger and magazine release. The magazine is well made, sturdy and is 100% reliable in operation. It loads easily. I bought the kit offering for the extra magazine, CO2 and BB's. I have no interest in the suppressor and I have not used it on the pistol during my testing.

Within the price point, I have no complaints. The gun is reasonably well constructed, reliable and accurate. The sights print low and slightly left with most ammunition, but it groups almost all BB's tested into less than 1-1/2" at 6 yards. The best of the BB's are consistently around 1-1/8". This was for 5 shots with the open sights. I found that most of the group spread was from variation in my alignment of the open sights from shot to shot as I could not be more precise with my 65 year old eyes and corrective lenses while shooting standing and unsupported. I afterward installed a laser on the rail and my groups became much more consistent and uniform. I now could shoot most BB's into less than an inch at the same indoor yardage.

The velocity rating of 400 fps is not consistent with my Chronographed velocities. Standard steel BB's average around 450 fps velocity when fired with a one-minute pause between shots. This gun will make its velocity claims even if fired rapidly. Because of the velocity I was getting, I loaded up some of the Excite 7.7 gr. plated lead shot. This was the most consistently accurate ammo in my gun and delivered 375 fps average velocity. It grouped with open sights around 1-3/16 inches at 6 yards free standing. I later went to the bench and did some 10 yard shooting using a rest and the open sights with the Excite ammunition. I was able to shoot groups of right under 1-1/16" several times. The shots were landing an inch high but right on windage wise. It was bright sun and I could not see my laser dot at that range in those conditions. I am persuaded that on a cloudy day or in deep shade the laser would allow for even better groups, so this pistol has very good accuracy.

Thank you for your comment!
Two years have passed since I bought this inexpensive pistol. In that time I have found its accuracy to be better than reported. With a laser at 6 yards, groups of less than 1/2" for 5 shots free standing are not uncommon when I am on my form. I have also tested this on cloudy days at 10 yards with the laser now and as suspected the groups are spectacular, My pistol will shoot entire magazines of Hornady Black Diamond BB's into an inch all day long at that distance from a supported position while seated at my sturdy bench. The one exception to this is when the CO2 begins to get low, the jump from firing begins to affect the shot as it is still in the barrel much longer at the lower velocity. Otherwise, this is a tack-driving BB pistol that shoots several ammo types into very impressive groups. I have several guns that are impressively designed and constructed which this gun lacks being moulded plastic, but no other BB pistol I own can out shoot this Bersa.
Add comment to this review