Today, we’ll take our first look at the accuracy of the AirForce Talon SS precharged pneumatic air rifle. Since I just returned from the NRA Annual Meetings and heard from a lot of owners what they think about this airgun, let me tell you what they all said. Many of them said they’ve never seen a more accurate airgun. Some do own other precharged air rifles, but admit that the Talon SS is equal in accuracy to the best of them.

A few years ago, I used to hear some criticism about the Talon SS trigger since it isn’t adjustable, but I guess people are shooting it more these days, because everyone I talked to at the NRA Show loves their trigger. They all confirmed that the trigger and safety both get lighter, smoother and easier to use as the rifle breaks in. One man was awed that his rifle had held air without leaking for seven months. Then, I told him about the prototype rifle I once found in the factory when I worked there. It was tucked under a work table and was covered with dust. It was still holding a charge after more than five years! So, they do hold their air indefinitely.

Many perspective buyers came up to me knowing a lot about the gun already, yet this was the first time they’d actually seen one. And a great many of them went to the airgun range and shot the Talon SS that was available to the public. After that, some of them came down to the Pyramyd Air booth and insisted on writing an order on the spot. If there had been working guns to sell, I estimate we could have sold quite a few during the show. And .22 caliber was the overwhelming choice of all buyers.

Scope
I used an obsolete Leapers Accushot 4-12×44 Mini SWAT mil-dot scope (without illuminated reticle) on the rifle. I mounted it in two-piece Leapers 30mm medium-height rings. Most shooters feel they need higher rings than I use because they don’t hold their rifles the same way I do. I get by with much lower rings because of this hold, so you may need more height than I do. Consider that when you buy one of these rifles.

I normally recommend an AirForce 4-16×50 scope for this rifle. It helps with the longer distances. But both of my AirForce scopes are on other airguns that are also being tested, so I had to use something different this time.

Sight-in
As I mentioned in the last report I had to install the factory 12-inch Lother Walther barrel that comes standard for this test, because I keep an optional 24-inch barrel in my SS at all other times. The benefit of almost doubling the power with the same amount of air is too good to pass up. I didn’t show the barrel changing process, but I will show it when I switch over to the 24-inch barrel in the next report.

So, the new barrel is in the gun and how many shots did it take to sight in? How about two? That’s correct. After two shots, all pellets were landing where I intended. This was not in the center of the bullseye, as I didn’t want to destroy the aim point.

Accuracy
As I mentioned in Part 2, there’s just one pellet for this rifle — the JSB Exact 15.9-grain dome. It’s true that the 14.3-grain Crosman Premier was once the most accurate pellet for the rifle; but as I mentioned, this particular JSB has replaced it in my rifle.

There were already 35 shots on the tank from the velocity test and two from the sight-in, but I dialed the power setting to 6 and proceeded to shoot a 10-shot group at 25 yards that measured 0.296 inches between centers. Getting 47 accurate shots on a single fill is pretty darned good.

Then, I filled the tank and shot the next group on power setting 10. Same pellet, just going faster. And naturally because I said in the last report that power setting 10 was the most accurate, this time it chose not to be. A single pellet turned a 0.33-inch group into one that measures 0.394 inches between centers. Again, the group is fairly round, telling me that the gun has no hangups and is performing up to snuff.

On power setting 10, ten JSB pellets went into this group that measures 0.394 inches at 25 yards.

I mentioned earlier that I used to shoot 3/8-inch test groups at 23 yards when I set up a new rifle for an AirForce customer or when I tested a customer’s rifle after repairs, but that was always a 5-shot group. Three-eighth’s of an inch is 0.375 inches, so I’m actually getting 10 shots into about the same size group as I used to get 5. I guess what that says is that you have to move back farther to really test an air rifle this accurate.

What’s next?
If this was the final report on the SS, I would go into some other things…but there’s more to come. So, that’ll be it for today.

I’ve already been asked by one reader to test the CO2 adapter on the gun. As long as I’m doing that, I think I’ll ask AirForce if I can borrow a Micro Meter tank and test that for you, as well. Next up will be the gun with the 24-inch optional barrel, which is the way I keep my SS set up. It effectively doubles the gun’s power and makes a rifle that I believe to be the most flexible in the PCP world. 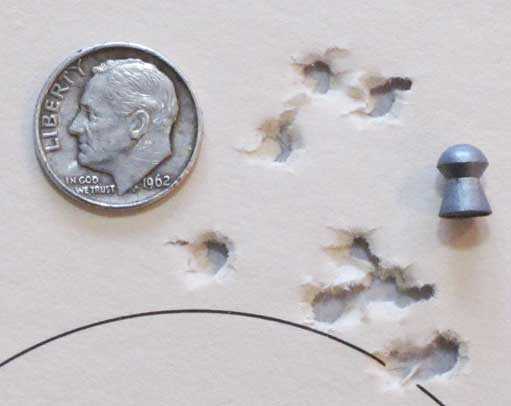 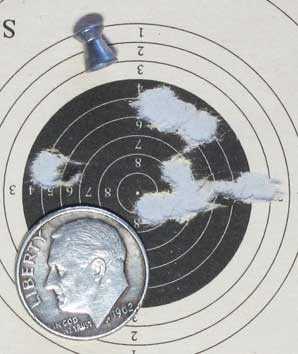