Hatsan’s Torpedo 155 underlever is a large and powerful spring-air rifle.

Let’s look at the accuracy of the Hatsan Torpedo 155 air rifle. The thing I was concerned about was how the movable barrel affects accuracy, and also how the gun handled in general.

The artillery hold
I knew the rifle would be sensitive to how it is held, so I approached it with kid gloves. I initially balanced the rifle with the forearm resting on my flat open hand while the heel was touching the triggerguard. That makes the rifle muzzle heavy and often it stabilizes the gun. Beeman Kodiaks were the first pellets I tried. The distance was 25 yards off a rest, and this time I used the open sights, exclusively.

Open sights
The open sights are fiberoptic, so you know they are large and somewhat imprecise. I used a 6 o’clock hold but couldn’t see the sides of the rear sight, so there was more horizontal dispersion than there normally would be. The rifle was very close to being on target right from the box, and it took only a few small adjustments to get it shooting where I wanted.

Kodiaks were first
At 21 grains, the Beeman Kodiaks are heavy enough to keep the rifle from breaking the sound barrier. Since I was shooting inside my house, that was important.

But they didn’t group — no matter how I held the rifle. With my hand back against the triggerguard, 10 Kodiaks made a group larger than four inches! I moved my hand forward to the cocking slot, hoping the change would improve things…but, again, I got a four-inch group. Kodiak pellets were just not right for this rifle.

JSB Exact Jumbo heavies
The 18.1-grain JSB Exact Jumbo Heavy pellets were next. This is a pellet that really does well in more powerful PCPs, and I thought that might carry over to the big Hatsan. Again, no dice. I shot them with both handholds previously mentioned and also with the rifle rested directly on the bag. Nothing worked, and the groups were all around the three-inch size. So, another pellet that I couldn’t get to shoot. The only interesting thing I noticed was that resting the rifle directly on the bag didn’t make it any less accurate. That was an exception to the norm.

Gamo TS-22
The final pellet I tried was the Gamo TS-22. This is a 22-grain dome that you haven’t seen me test very much, because I haven’t found it to be accurate in anything until now. But in this Hatsan underlever, it was the best pellet I tested. The group was much smaller than all the others, plus I tried a third variation of the artillery hold — with my hand under the brass button that releases the cocking lever. That’s about halfway between both of the other two holds, and the rifle seems balanced at that point. What I’m going to show you is not a great group for 10 shots at 25 yards, but it is significantly better than those made by the other two pellets. 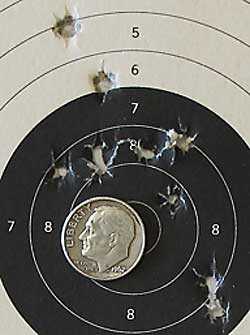 It’s not a great group, but these Gamo TS-22 pellets stayed together better than the other two I tried. Group measures 2.658 inches between centers. It indicates the rifle wants to shoot, but the open sights may be holding it back.

After shooting this better group, I tried another target with Kodiaks using the new holding method. The group opened back up to over three inches, so the assessment that Kodiaks were not right for the gun still stands.

Break-in
Remember what the cocking effort measured during the velocity test? It was right at 64 lbs. of effort. After today’s accuracy test in which another 60 pellets were fired, the cocking effort had fallen to just 54 lbs. As expected, the rifle is clearly breaking in.

The trigger releases with a lighter pull than before, though I didn’t measure it again. Stage two has a bucketful of creep, but it’s now very light creep. I think the trigger is getting better with use, as well. I’ll measure it, again, when I do the next accuracy test.

The overall firing behavior is now faster and has less recoil than it did during the velocity test. That’s one more indication that the rifle’s breaking in.

Conclusions thus far
The Hatsan Torpedo 155 seems to need a prolonged break-in, like the air rifles of old. It’s a shame I can’t give it that kind of attention, but all indicators are that it will smooth out as the shots stack up. It’ll never be a plinker because of the size, weight and power it projects; but if I can get it to shoot accurately, it might be a viable spring hunting rifle.

Next, I’ll test it with a scope.