Today, blog reader Paul Hudson shares his Theoben Crusader rifle with us. The Crusader is not as well-known in the U.S. as some other Theoben models, so this will be an interesting report.

With its walnut stock, the Theoben Crusader is a large, handsome airgun.

The Theoben Crusader is a high-power breakbarrel airgun, identical in size and performance to the Beeman R1. Its stablemate, the Theoben Eliminator, seems to get far more press since it’s one of the most powerful breakbarrel airguns available. That power comes with a high price — a cocking effort of 50+ lbs. — that most shooters are not willing to endure for very long. The Crusader, on the other hand, is far easier to cock and is a more practical airgun. Based on the used guns I’ve seen for sale, either the Crusader sales are much lower or people tend to keep them. Few are seen on the usual airgun sales sites or at airgun shows.

The Crusader is a high-quality spring-piston rifle.

Measuring a full four feet in length and weighing 8 lbs., 3 oz. unscoped, the Crusader is a large airgun. Mine is .177 caliber; but .20, .22, and .25 calibers are also available. The Lothar Walther barrel is 16 inches long, and a muzzlebrake is standard equipment (.22-caliber Crusaders have an Anschütz barrel). There are no baffles in the muzzlebrake. No open sights are supplied by the factory, making an optical sight a necessity. My rifle has a right-hand walnut stock, but an ambidextrous stock can be had from the factory as a no-cost option. The pressed checkering does give enough grip to be functional. A very good non-slip recoil pad keeps the rifle in place. No plastic parts are used on the rifle.

The metal work on the Crusader is first-rate, with a high polish that’s typical of many British airguns, and the wood-to-metal fit is excellent. Allen-head screws are used throughout the gun except for one screw that secures the triggerguard. 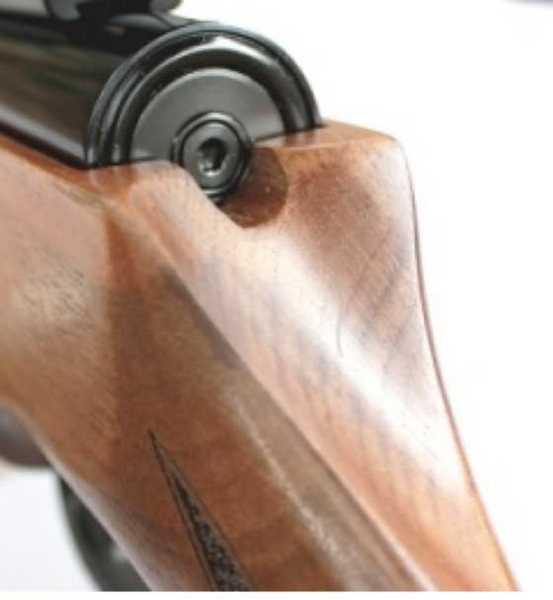 Behind that screw, a Schrader valve allows the owner to change the air pressure in the gas spring. Note the thumb rest in the stock.

A gas spring
Like all Theoben springers, the Crusader uses a gas spring, not a metal spring. Cocking is butter-smooth and requires 38 lbs. of effort. The piston includes a sliding weight that reduces piston bounce and felt recoil. A Schrader valve at the rear of the receiver allows the pressure in the gas spring assembly to be adjusted to vary the power of the gun. Upon firing there’s no spring twang or vibration, just a quick snap. The sound level is moderate. And, due to the size of the gun and careful tuning, the felt recoil is mild for the power level. 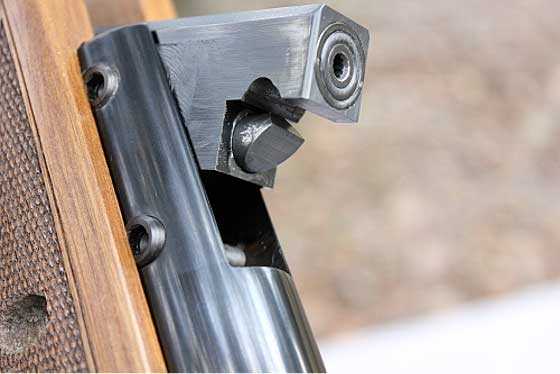 The lower bolt is pinched between the breech block and the locking wedge to prevent vertical barrel movement. Note the taper at the rear of the barrel to make pellets easier to seat.

The barrel pivot setup on the Crusader is a little unusual. Most breakbarrels use a breechblock that’s close to the width of the forks of the receiver. Wide, thin shims may also be present between the breechblock and the receiver forks. The pivot bolt is then tensioned to the point that the lateral barrel movement is constrained. The breechblock on the Crusader has much more side clearance. Belleville washers are used to control the lateral movement. Belleville washers are cone-shaped from the side and are actually considered to be springs. A second bolt behind the pivot bolt mates with a hook on the back of the breechblock. The locking wedge pulls the breechblock tightly against this bolt to control the vertical movement of the barrel. Like many classic Webley rifles, the Crusader takes a bit of a slap to open the barrel for cocking. 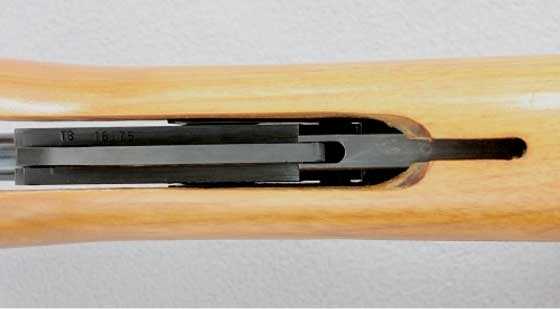 The unusually wide breechblock/fork clearance is visible from below the action. (The photo is overexposed, leading to the yellow stock color. This was necessary to bring out the detail within the cocking slot.)

The trigger
The Evolution trigger of the Crusader and other models has been criticized by some; and given the price of the gun, that may be justified. No creep is felt in the first stage, but the second stage is not as crisp as a Rekord trigger. As the gun came from the factory, the second stage breaks cleanly at 1 lb., 13 oz. The safety blade resides in front of the trigger and automatically sets when the gun is cocked. It can also be manually reset. Overall, I would rate the Crusader trigger as very good, just not quite as good as a Rekord or TX200 unit but not a reason to avoid the gun. 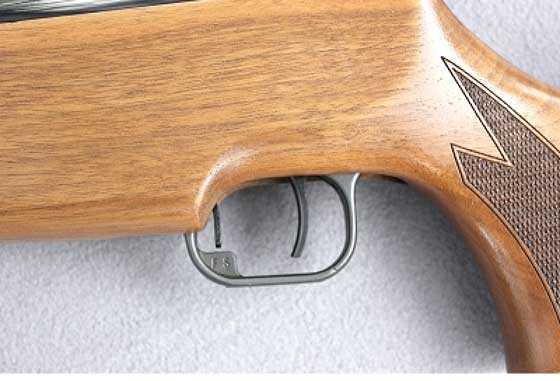 The trigger blade is almost straight; the automatic safety resides in the front of the triggerguard and is pressed forward to fire.

Performance
Velocities with the Crusader are similar to what’s found in a Beeman R1, and some lighter pellets in a .177-caliber rifle will go supersonic and ruin the accuracy. I tried a couple H&N Field Target Trophy Green pellets, but they traveled almost 1200 feet per second and missed the bullet trap at 25 yards. Extreme spreads with most pellets were under 20 feet per second, and a few varied by less than 10…very good for a springer. 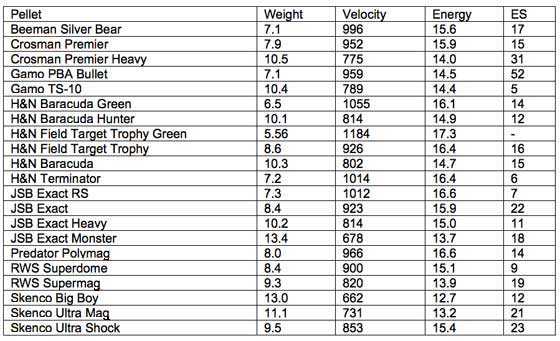 These are the velocities the Crusader can deliver with the selected pellets.

25-yard accuracy
Many pellets gave 5-shot groups around an inch in size at 25 yards. Several gave very good accuracy, including a few that surprised me. To get the best accuracy shooting from the bench, I had to hold the airgun loosely with my right hand and keep my left hand open. If I let my fingers touch the forearm, I had to make sure I didn’t squeeze the gun at all or the groups would open up. In other words, use the classic artillery hold. You cannot grip this airgun tightly and get good accuracy; it’ll take practice and proper technique to get the best results.

All groups were 5 shots at 25 yards, and the sights were not adjusted for the different pellets. It was interesting to see the difference in the points of impact. Predator Polymags and 8.4-grain JSB Exacts shot especially high in relation to the other pellets. Unfortunately, neither 7.9-grain Crosman Premier lites nor 10.5-grain Premiers heavies did much better than one-inch groups at 25 yards. While that’s not too bad, a number of pellets did far better. 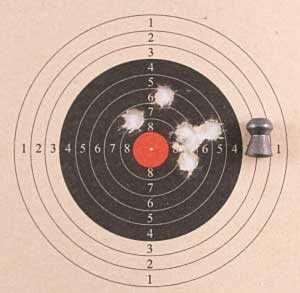 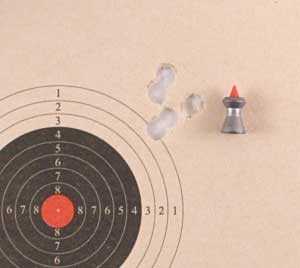 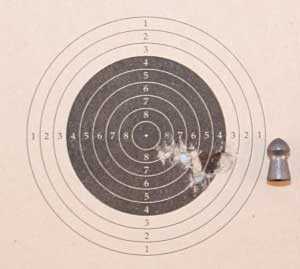 Gamo TS-10 surprised me with a 0.45-inch group; but their size seemed a bit inconsistent, and there were some flyers with this pellet. 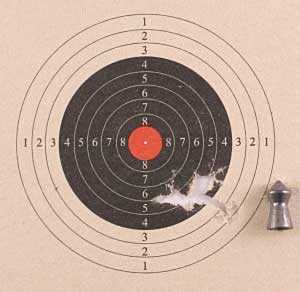 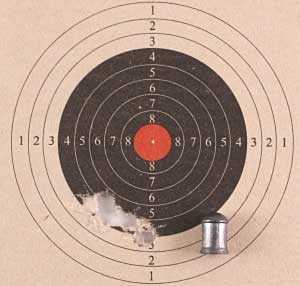 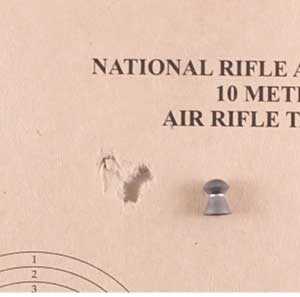 The Crusader really liked the 8.4-grain JSB Exacts, as this round 0.24-inch group shows.

Best accuracy came from the Beeman Kodiak pellet. This group above is just 0.23 inches.

Adding it all up
Why buy a Crusader? After all, it costs just over $1000, and that price will keep many away. Compared to a Beeman R1, the size and power are identical. The R1 has a better trigger, but the Crusader has a better firing behavior due to the gas spring. The Crusader also has a far nicer stock, better metal finish and includes a factory muzzlebrake. Between my Crusader and my R1, the Crusader shoots more pellets accurately and will shoot slightly smaller groups, probably due to the fine Lothar Walther barrel. Unfortunately, the Crusader is more hold sensitive than my R1.

Both rifles should last a lifetime with proper care. It’s possible to upgrade an R1 with a new stock, a gas spring, muzzlebrake, etc., but you’ll end up spending more than the cost of the Crusader and still do not have the nice metal work. If you can afford it, the Crusader offers very good accuracy in a nicely finished package.

Theoben Production ceases
In October, 2012, Theoben Ltd. in England announced that they were entering liquidation (bankruptcy). It remains to be seen whether another company will take over production rights for Theoben springers.