Today, we test the Umarex Fusion CO2 rifle for velocity and several other things you readers are interested in. You may remember that in the first part I had a problem with the rifle not sealing when I loaded the CO2 cartridges. Blog reader mikeiniowa nailed the problem with the Fusion CO2 cap. The part that contains the piercing pin was partially unscrewed and was, therefore, longer than it should be. It was piercing the cartridges before the o-ring was in position to seal the gun. So, a lot of gas leaked out; and, because the o-ring absorbs CO2 and swells when it does, it also prevented the cap from being screwed down tight. 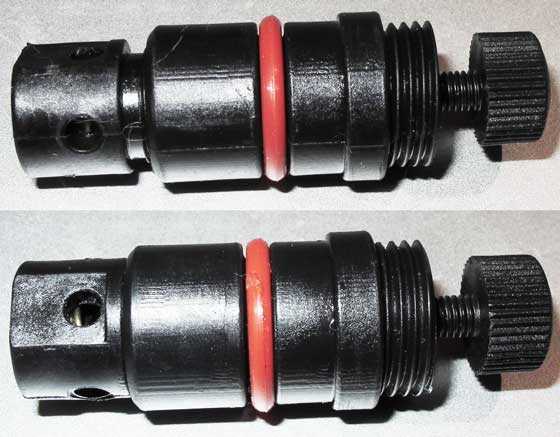 In the top photo, the Fusion cap is unscrewed almost all the way. On the bottom is the cap properly together.

I’m going to show that cap in detail in a later report. It’s made so complex because of the material the o-ring is made from. If a different material had been used, none of the complex parts would be needed…and the cap could be made for less cost.

So, with the cap assembled correctly, I was able to load 2 fresh CO2 cartridges. This time, everything worked as it should, and the velocity test began.

JSB Exact RS
The first pellet I tried was the 7.3-grain JSB Exact RS. This lightweight dome is a winner in many lower-powered air rifles, and I believe the Fusion will be one of them. The first shots started slow, at 619, 647 and 644 f.p.s. Then, the velocity jumped up to 663 and remained above that number for the remainder of the string. The average, once the velocity was in the curve, was 667 f.p.s.  That means the Fusion’s valve needs to be awakened after installing fresh cartridges.

The low velocity, once the pellet had climbed into the stable spread, was 663 f.p.s., and the high was 673 f.p.s. At the average velocity, the RS pellet produced 7.21 foot-pounds of muzzle energy. Because the Fusion is a gas gun, we can expect the power to increase and decrease with the pellet weight.

I tested the same pellet several hours later, and the first JSB RS out the spout went 686 f.p.s., so the velocity had increased by 20 f.p.s. after 40 shots had been fired and the gun then rested for 3 hours. But that was also the end of the power curve. By shot 50, the velocity of all the pellets started to drop again.

RWS Hobby
The second pellet I tried was the 7-grain RWS Hobby wadcutter. They averaged 669 f.p.s. with a spread from 661 to 681 f.p.s. At the average velocity, this pellet generated 6.96 foot-pounds of energy at the muzzle. Lighter pellet, less energy.

Crosman SSP hollowpoints
The third pellet I tested was the Crosman SSP hollowpoint. Remember, Umarex lists the velocity of the Fusion at 750 f.p.s. with lead-free pellets (which they call alloy) and 700 f.p.s. with lead pellets. I should have tested the rifle with RWS HyperMAX since those are the ones Umarex imports and distributes, but I didn’t have any on hand. Anyway, the Crosman pellets worked fine. They gave an average 766 f.p.s. velocity, with a low of 757 and a high of 783 f.p.s. At the average velocity, this 4-grain pellet produced 5.21 foot-pounds of muzzle energy, so it’s staying on track for the pellet-weight-to-velocity relationship.

H&H Baracuda
The last pellet I tried was the 10.6-grain H&N Baracuda Match. In a spring gun, the velocity for this pellet would fall off quite a bit from the numbers for these lightweight pellets, but gas guns and pneumatics are different. Heavy pellets don’t lose nearly as much velocity as they do in spring guns. The average for Baracudas was 612 f.p.s. The range went from 600 to 616 f.p.s. At the average velocity, the Baracuda produced 8.82 foot-pounds, which is significantly higher than any other pellet.

One of our readers mentioned that the total number of good shots he gets is about 70 shots with each set of CO2 cartridges. I was looking for about that number. I noticed the velocity began dropping at shot 50. But there were still 10 more good shots in the gun. From shots 56 through 60, the velocity for the baseline JSB Exact RS pellets was 622, 614, 603, 602, and 584 f.p.s. While there were still more shots to be fired, I felt that accuracy would probably drop off at this point. So, I’ll rate the Fusion I’m testing as a 60-shot gun.

Noise?
And, now, we come to the question on everyone’s mind. Is the Fusion quiet? Umarex not only says that it is, they tout the low sound level heavily in their advertising campaigns. While I don’t have any scientific sound measurement equipment to test with, I can make a fairly good subjective observation of the gun’s report. I compared it to my Diana model 23, which most of you readers know to be a very small, low-powered spring-piston youth model air gun. The Fusion and the Diana 23 are approximately the same loudness. That means that the Fusion is a very quiet air rifle.

Blog reader Matt61 wondered if it would be louder than a ballpoint pen falling on a thick carpet, and I must say that it is. But it isn’t much louder. I think this is a gun you could shoot in an apartment that has thin walls separating you from the neighbors. You should be able to shoot in even small backyards without disturbing the neighborhood.

Trigger
I told you the trigger is 2-stage. Stage 1 is light and relatively short. Stage 2 is also light but long and creepy. The sear releases at around 3 lbs., 12 oz.

What’s left?
Besides the accuracy test, which is expected, I also want to take the gun out of its stock and look for both the power adjuster and the trigger adjustment that reader mikeiniowa mentioned. I’ll use that report to also show you the details of the CO2 cap and explain how it works so you understand what’s going on.

Given the power level of the Fusion, I think I’ll start testing accuracy at 10 meters and then back up to 25 yards. If the rifle comes through the accuracy portion with honors, I’ll give it a hearty recommendation. 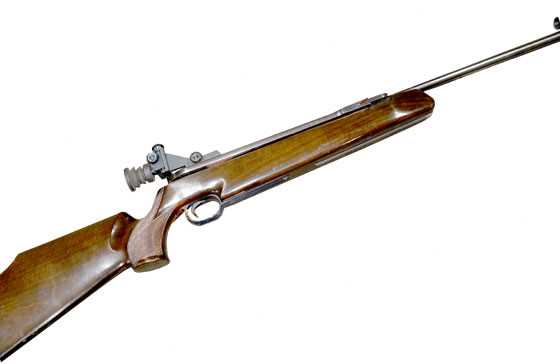