Today, I’ll finish the tune of the Feinwerkbau Sport air rifle, and then we’ll test it. When we ended the last report, we had looked at all the parts and cleaned off the excess gear oil.

Assembly
Now it’s time to assemble the rifle. I looked at the trigger assembly that receives and holds the piston rod when the rifle is cocked. It’s very similar to the 124 trigger, but I can see refinement in fit and finish. This won’t be an easy trigger to modify, but it’s so nice as it comes from the factory that this isn’t an issue. I did not lubricate the trigger before assembly, but I did dry off the gear oil. 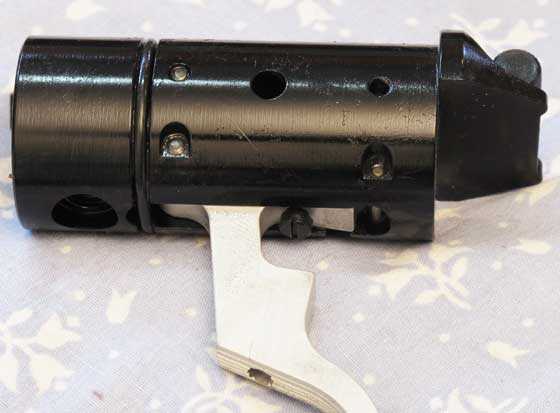 A lot of similarity with the FWB 124 trigger, but these parts are finished better. 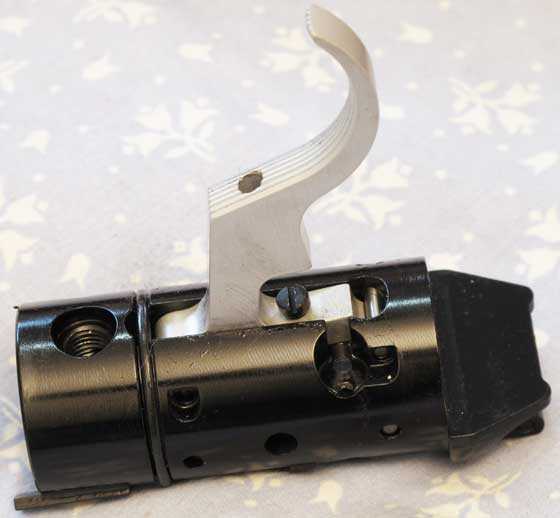 Underneath, you can see the trigger parts more clearly. Very similar to a 124 trigger except for a much better finish. 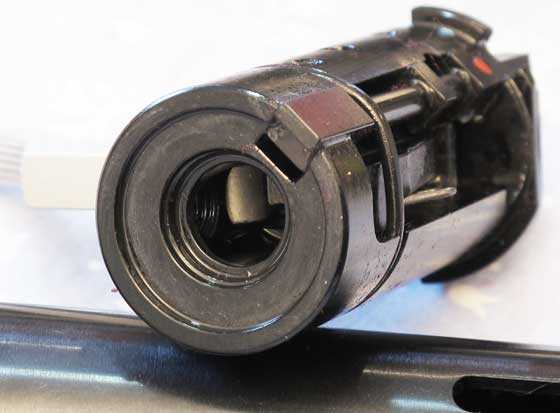 The piston rod enters the trigger assembly here to catch the sear and set the safety. The flat bar on top is the safety.

The barrel was placed back into the action’s forks. Other breakbarrels fight this assembly because the pivot bearings slip out of place as the baseblock is slid into the action fork, but the Sport’s bearings fit so well into recesses that there’s no movement. Once the pivot bolt is in the hole, it’s tightened. Then, the locking screw is tightened in the end of the bolt. With the Torx fasteners, it’s so easy to do!

Lubrication
All metal parts that slide against each other got a coat of Air Venturi Moly grease. That would be the tail of the piston, the beveled edges of the cocking shoe and the piston slot they ride in. I used to pre-coat the compression chamber with a film of moly paste, but I’ve found that the moly that transfers from the piston seal is sufficient to do the job if the chamber walls are finely finished.

I’m not going to make parts for the gun, and I wanted to stay on the light side with the lube, so I buttered the mainspring with Beeman Spring Gel, which is no longer sold, but which is a red synthetic grease of medium viscosity and tack. Since the spring guide is so loose on the mainspring, I probably should have used black tar on that part, because it’s very viscous and tacky. Instead, I used a coat of Beeman Mainspring Dampening Compound — another obsolete white synthetic grease of higher viscosity than Spring Gel, but lower than black tar.

Both these greases are no longer made, but you can find acceptable substitutes in the synthetic greases at any good auto parts store. Look at wheel bearing greases, especially. If you’re going to tune airguns, finding the right lubricants is very important, and automotive stores plus the farm supply stores are great places to look. 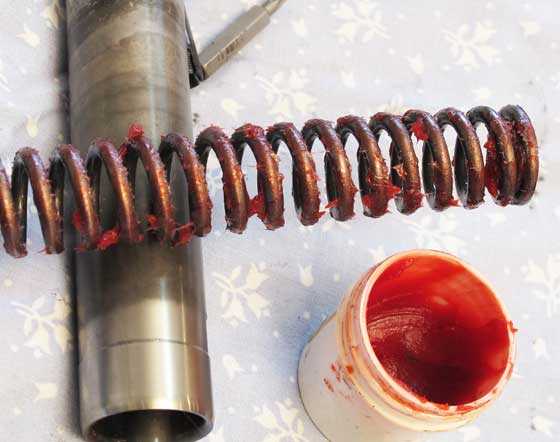 I butter the front half of the spring with Spring Gel, then insert it into the rifle and butter the back half. That way, I don’t have to hold it. 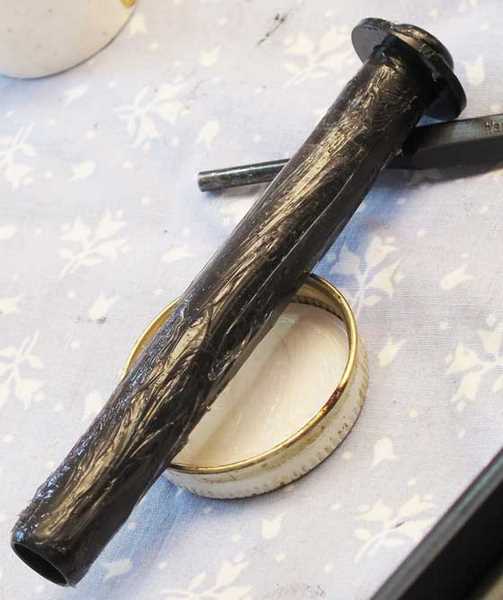 The spring guide was heavily coated (buttered) with Beeman Mainspring Dampening compound. It’s thicker than Spring Gel but can also rob some power when used too heavily.

The rifle went together exactly the same way it came apart. Everything fits together so well on this airgun! And the Torx fasteners do their job with such precision. Other airguns have them in some places — the Sport uses them everywhere. I wish you could see this for yourselves. I don’t say any of this to justify the cost of the rifle, but I do wish that more air rifles were made this well!

Testing the rifle
With the rifle together, again, the first thing I wanted to do was test it to see what had changed from the tune. I cocked it and checked the tension on the pivot joint. It was perfect — just as it had been before disassembly. The barrel stays wherever it is placed after the rifle is cocked, which is what you always strive for. That assures the breech will remain closed when the rifle fires.

Cocking the gun seems no different than before. The action is almost silent and everything works exactly as it should. That was true before the tune, as well. What I’m saying is the Sport isn’t a rifle that can be cocked without setting the automatic safety every time, as many other spring rifles can.

I fired, and could tell right away the gun felt much more solid. There’s a lot less buzzing in the powerplant each time the rifle fires. And because thick viscous grease was used instead of oil, it will remain this way for a long time.

But, I must be honest. This lube tune did not remove the last bit of buzz. If this were my personal rifle, I would certainly make a new spring guide and also look into buttoning the piston. I might even look into a new piston seal, as this one could be tighter. The buttoning might take care of that, though, so I would do that first and test the results.

Air Arms Falcon pellets
Next up was the Falcon dome from Air Arms with a 4.52mm head. Before the tune, this pellet averaged 928 f.p.,s., with a 19 f.p.s. spread from 919 to 938 f.p.s. After the tune, the same pellet averaged 953 f.p.s. with a 10 f.p.s spread from 947 to 957 f.p.s. While it does look like there has been a velocity increase, I had 2 shots at the beginning of the string that broke the sound barrier. One was 1029 f.p.s. and the other was 1062 f.p.s. I disregarded them because the velocity settled down so quickly and was then so very stable. I think it’s still too early to say the velocity has picked up. Maybe after 1000 shots we might get a better sense of what’s been done, but I won’t be testing this gun that long.

H&N Baracuda Match pellets
Perhaps the final pellet I tested tells the true story. It was the H&N Baracuda Match with a 4.50mm head. Before the tune, this pellet averaged 708 f.p.s. with a 20 f.p.s. spread that ranged from a low of 699 to a high of 719 f.p.s. After the tune, this pellet averaged 709 f.p.s., so not much difference. The spread after the tune was 15 f.p.s. and went from 703 to 718 f.p.s. I must mention that the gun doesn’t sound very good when shooting this very heavy pellet, so I only did this as a test.

Evaluation to this point
The FWB Sport needs a heavier lube than I used, or it needs more than just a lube tune. The spring guide needs to be replaced, first and foremost. After that, the rifle might shoot smooth. If not, the piston could be tightened with buttoning.

I don’t know if I’ll go back to the 50-yard range for another test, or not. Logic tells me the accuracy shouldn’t change. But now that the rifle shoots smoother, I find myself asking, “Why not?”