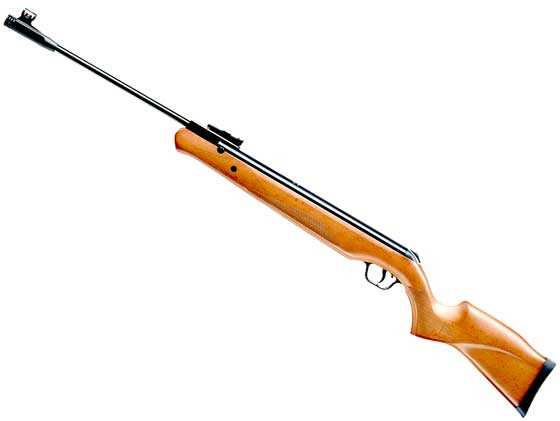 Today I begin testing the accuracy of the .22-caliber Walther Parrus with wood stock. Since the rifle has open sights, I used today to sort through 6 candidate pellets for future tests.

I only shot 5-shot groups today, because I’m not testing the ultimate accuracy of the rifle — just the potential for certain pellets to be accurate. Also I had to shoot left-handed because my right eye is acting up. I can’t see the target with my right eye when I look at the front sight. The good news is my retina specialist tells me that it’s time for me to get a pair of glasses. Looks like the eye is healed as far as it’s going to. At least with glasses I should be able to see things with both eyes again.

I shot from a rest at 10 meters. With the target brightly lit by a 500 watt halogen light, I am able to see a squared-off front sight post instead of the fiberoptic dot. Aiming precision is greatly improved. All the bullseyes are shown in the same attitude in which they were shot.

The first pellet I tested was the 14.66-grain H&N Field Target Trophy. I have never had success with this pellet, though others swear by it. I tested the pellet with the 5.55mm head.

Five pellets went into an open group that measured 1.438-inches between centers at 10 meters. They are all over the place, and I know this is not the right pellet for the Parrus under test. 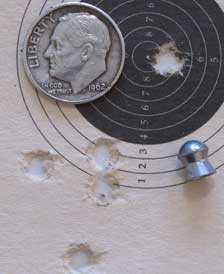 Five H&N Field Target Trophy pellets went into 1.438-inches at 10 meters. Not a good pellet for the Parrus being tested.

Are you concerned? I’m not, and I’ll explain why. I knew the FTT pellet was probably not a good one for this rifle. It fit the breech really tight, and I have never had any luck with this particular pellet.

I also know I’m shooting left-handed, which will affect my accuracy a little. Some shooters might feel daunted by this, but I have done it enough to know that it does work. Just look at what the next pellet did and you’ll understand.

I get mixed results from RWS Superdome pellets. Some airguns like them and others don’t. This Parrus I’m testing likes them a lot. Let me show you what a good group looks like. Five Superdomes went into 0.61-inches. 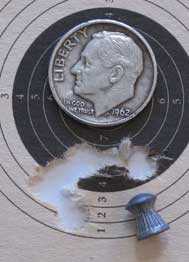 Now this is a group! Shooting left-handed, this is about as good as I could do on this particular day. At 0.61-inches between centers at 10 meters, it’s much better than the FTT group. This pellet is worth testing further in this rifle.

I tested the JSB Exact 15.89 grain domed pellet next. Five of them went into a vertical group measuring 0.588-inches between centers at 10 meters. That’s so close to what the Superdomes did that I would call it a tie. This is another pellet to be tested later. 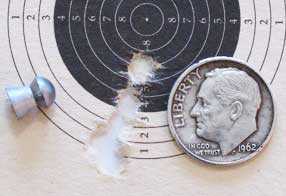 Think I’m on a roll? In the groove? Watch what happens when I try 5 Eley Wasp 5.6mm pellets. The group opens up to 1.334-inches between centers and you see right away that there is a big difference in pellets. Wasps fit the breech tight and are not for this Parrus. 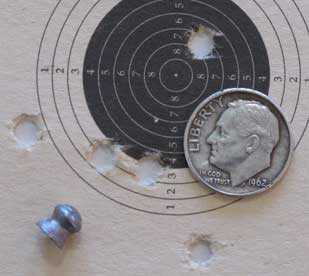 Five Eley Wasp pellets scattered at 10 meters into this 1.334-inch group. There is a definite difference in performance, depending on which pellet is used.

These large groups don’t bother me because I’m also getting the smaller ones. Shooting left-handed with open sights is enough of a handicap that I can tolerate the size of the groups for now.

The fifth pellet I tried was the H&N Baracuda Match pellet with the 5.53mm head. I had a feeling these would be good and they didn’t disappoint. Five went into 0.664-inches at 10 meters. They strung vertically, which seems to be a common theme when I shoot left-handed. 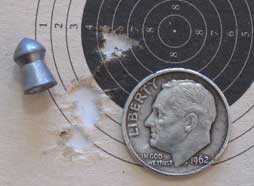 Five H&N Baracuda Match went into this 0.664-inch group at 10 meters. This is another pellet I will try again.

The final pellet I tried was the 18.1-grain JSB Exact Jumbo Heavy pellets. They fit the breech very well and seemed to be a natural choice for the Parrus. Five went into an identical 0.664-inch group at 10 meters, but within this group is a smaller group of 3 pellets in 0.273-inches. Does that bode well for the future? Who knows? It was enough to land them in contention. 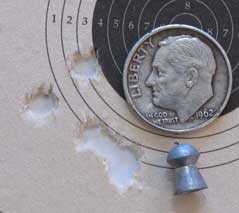 Five JSB Exact Jumbo domes went into 0.664-inches at 10 meters, but three of them are in a tantalizing 0.273-inch group.

Today I tried something different. I shot 5-shot groups that allowed me to test more pellets for accuracy potential. Once again, 5 shots are not an indicator of true accuracy, but as you see here, they do separate the wheat from the chaff. This is a good way to test a lot of different pellets fast.

Next I’ll mount a scope and go for accuracy at 25 yards. If we see results that are good enough there, I will also go to 50 yards.