Let’s continue with our look at the new airguns and things at the 2017 SHOT Show. We will begin with Crosman. While I was gawking at the guns, Jesse Caster from Crosman came up and showed me everything you are about to see.

The first thing I did was examine the new Benjamin Wildfire rifle. Based on the famous Crosman 1077 that is itself a copy of Ruger’s iconic 10/22 rifle, the Wildfire feels just as light as the CO2-powered rifle. I was hoping it would.

New Benjamin Wildfire looks very similar to a 1077. The biggest difference is the longer reservoir.

That tells me that the trigger will feel the same. The 1077 trigger both cocks and releases the striker and advanced the 12-shot circular magazine to the next chamber. That’s why I keep insisting it’s a double-action revolver. The feel of the trigger is exactly the same as that of a double action revolver.

The good news is the trigger does break in with use, but not with use of the rifle! It is the removable magazine box that determines how well the trigger feels. New magazine boxes are stiffer than those that have been broken in.

Yes the Wildfire is exactly what the Amnerican airgunner has been wanting for years — a repeating PCP for $150 — but the surprises don’t stop there. I was stunned to find they had put a pressure gauge or manometer on the rifle! That floored me! And it was the exact right thing to do. 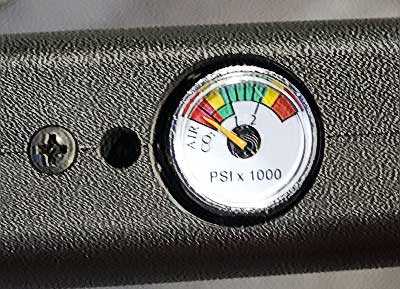 And there is the gauge — the difference between doing it right and just doing it. Well done, Crosman!

For those who are not yet familiar with the 1077, you are in for a treat. These rifles are quite accurate with the right pellets!

Moving on, we come to the new Benjamin Marauder Field & Target — the Marauder with a regulator. It’s easy to spot, because it’s that silver strip between the reservoir tube and the receiver of the rifle. I don’t see it live on the website yet, but it looks just like a regular Marauder with a couple important differences. 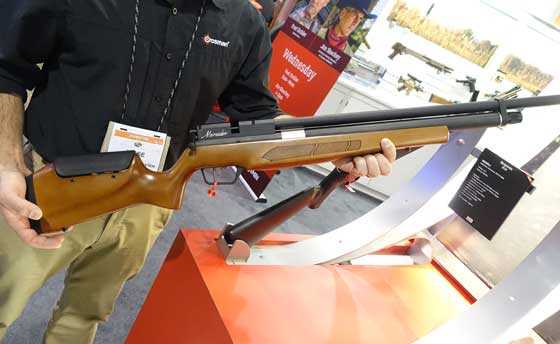 Jesse from Crosman holds the new Marauder Field & Target. Note the silver band? That’s the regulator. Production guns will be finished there, I’m sure.

Does it really have an adjustable trigger? Yes and no. The regulator is not user-adjustable, but a switch on the bottom of the forearm allows the shooter to engage it for maximum shot count or disengage it for greatest power potential. Remember that the Marauder is already one of the most owner-tunable air rifles on the market — this feature simple gives you one more option. However, if should be used in conjunction with all the existing adjustments. And Crosman made the switch operate by a coin, or by a tool they now build into the cap that covers the air inlet nipple. Neat!

Can you retrofit a regulator to your Marauder? No. Installing a reg is a complex process with several new parts, including the stock.

The new rifle also comes with an adjustable cheekpiece — another thing done right. And Crosman is now reaming their tubes before rifling them — which improves accuracy. The new Field & Target rifle will have a reamed barrel. And, I have saved the best for last. The suggested retail price will be just $619! Phooey on the naysayers who were guessing it would cost a grand. Apparently Crosman is here to stay!

Jesse showed me the Remington 1875 revolver next. All I can say is Umarex had better keep an eye on these guys, because this air pistol is a real beauty! Many are familiar with the Colt SAA, but I have also owned an original Remington 1875 revolver and they just do not stand out with a blued finish. I don’t care for a nickel finish most of the time, but on this gun, it looks right! 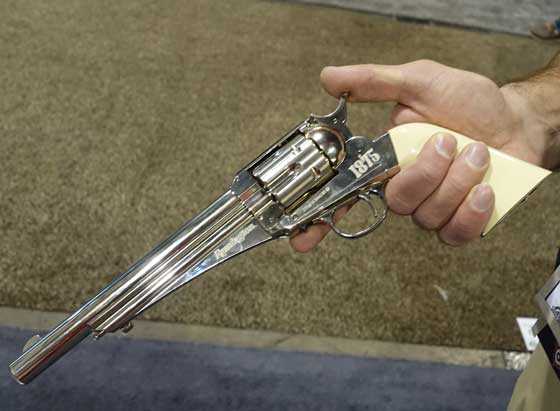 Isn’t it beautiful? The 1875 Remington BB revolver is exactly like the firearm. 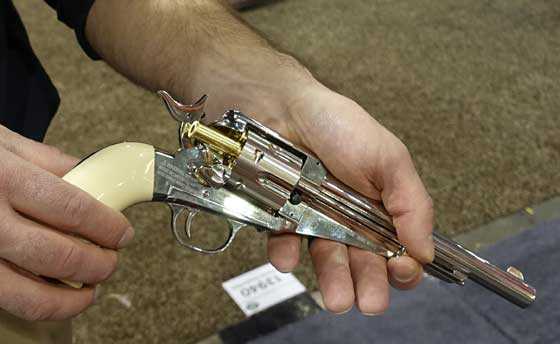 The 1875 uses brass cartridges to hold the BBs. You can use pellets, too!

Final comment on the Remington. It disassembles just like the firearm! And that is something very few shooter will ever have experienced. It’s very similar to the far more common 1858 Remington cap and ball, if you know that gun. I think the realism of these replica airguns is fantastic!

Does this report start to sound like the Crosman show? Well, guys, if they have the guns, I’m going to show them to you.

Finally, Jesse asked me if I wanted to see the new Mayhem Stealth breakbarrel with the built-in Silencing Barrel Device (SBD). Yes! It’s a breakbarrel that’s powered by their NP2 gas piston, but guys — get this! It comes with OPEN SIGHTS! And not just open sights — open sights without fiberoptics! From the offerings at this show you would think that Crosman really cares about airgunners, and that they listen to what we say! 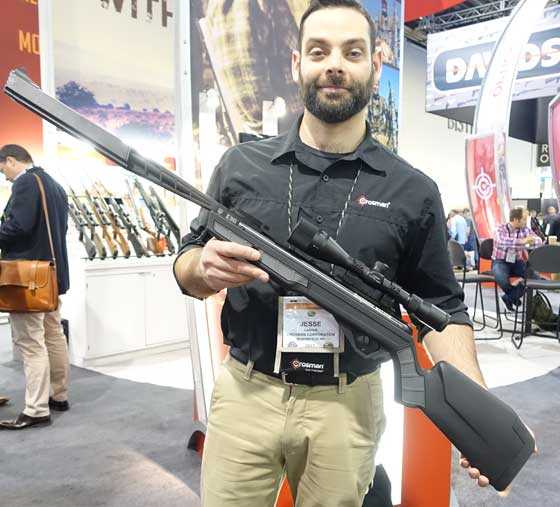 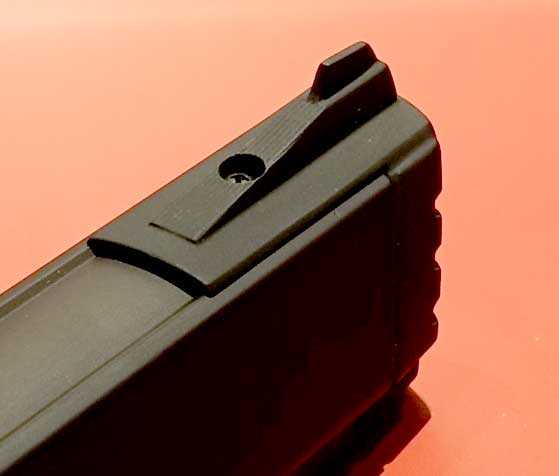 The Mayhem front sight is a plain post. Hurrah! 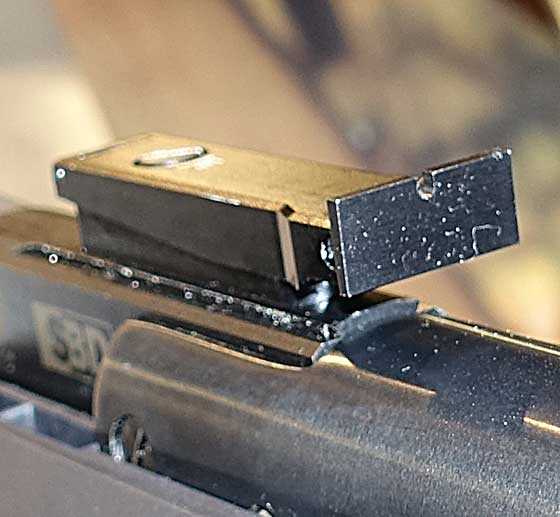 The SBD is asymmetric for a reason. The shape keeps the top of the silencer out of the line of sight of the scope that most shooters will mount. You see — the asymmetry extends to the muzzle of the airgun. 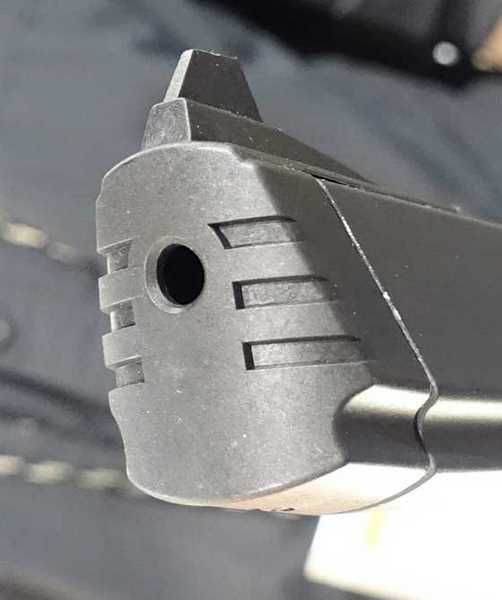 The barrel is offset from the centerline of the SBD to keep the profile low for scopes. And that nose cap comes off!

Okay, we understand the Mayhem has the new SBD, and we know it’s filled with baffles. Anyone who has ever lost a cleaning patch in the baffles of an airgun silencer, raise your hand. That’s a lot of hands, folks. Well, these Crosman engineers aren’t dummies. They know this is a common problem. So, while the baffles are molded directly to the barrel shroud so they don’t rattle around, remove a single screw and the front cap of the SBD comes off, allowing you to remove the outer shell of the shroud! Voila — access to the naked barrel! 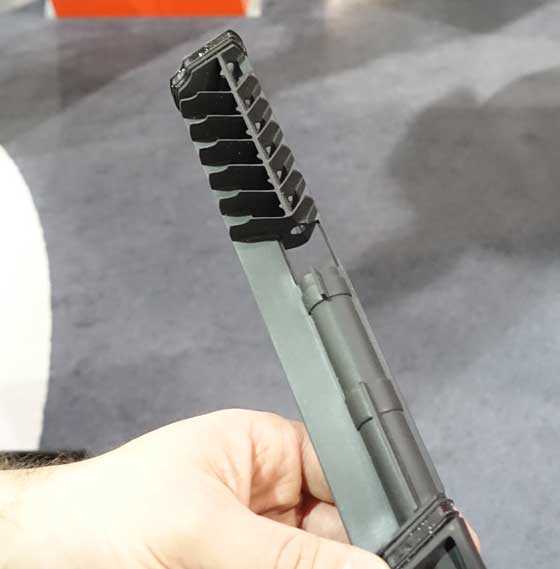 With the outer shroud removed there is no way you are going to loose a cleaning patch in those baffles!

Crosman day, indeed! Well, I have to admit, there are things at this show besides airguns. Let me show you a few pretty shotguns. 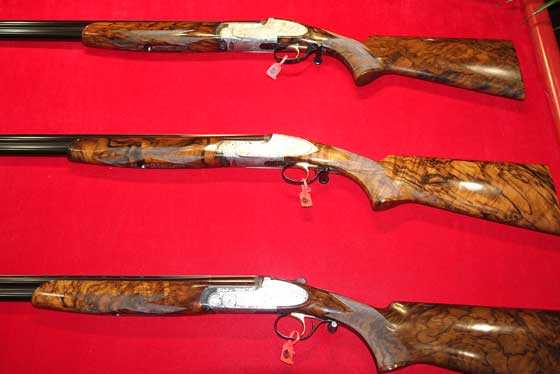 This set of Perazzi shotguns was one of about 25 on display. Sorry for the flare on the receivers. There was so much engraving that it overpowered my flash. 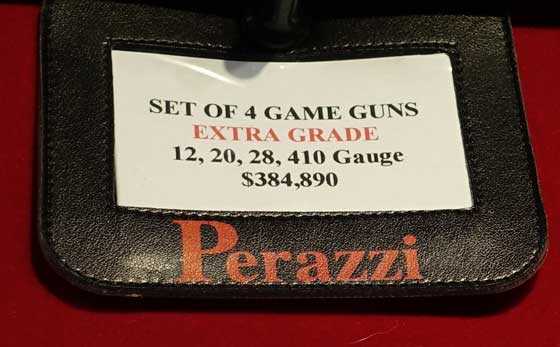 Oh, you know, I think I left my wallet in my other pants!

That’s it for today. Lots more to come. 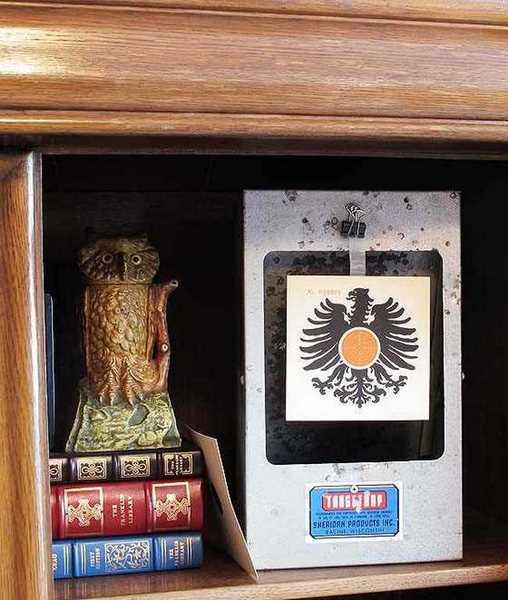 The making of Tom Gaylord