Part 1
Part 2
A history of airguns

This is an oldie from 2009 that I recycled because I was out of town, attending to my sister several weeks ago. Today we look at Part 3.

Despite the size of this photo, the C1 is a small rifle. The western look was unique in its day. The scope is a 2-7X32 BSA.

Today, I’ll test the Beeman C1 carbine for accuracy. You will remember that it was shooting on the slow side when I tested it in Part 2. That shouldn’t affect accuracy, though. You will also remember that the C1 has a single-stage trigger that many of you say you prefer. This one came from the factory rough and creepy but broke in to be smooth and sweet, if not exactly crisp.

My rifle is scoped with a BSA 2-7×32 scope. The C1 has no scope stop, so the rear ring is butted against the end of the 11mm dovetails, which end at the end cap. It’s not a good way to stop a scope, but it’s all this Webley had.

You may recall that when I got this rifle it had the scope mounted. I always wonder when I get one like that if the scope was just thrown on for looks or perhaps it lived on the rifle for many years and is sighted-in to a gnat’s eyelash. I’ve never found one of the latter, and this one certainly never knew this scope before I started shooting it. It was off by about a foot at 23 yards! What I’m saying is people don’t often sell sighted-in rifles.

I painstakingly adjusted the scope until it was hitting the point of aim–sort of. Actually, the story is much more interesting, so why don’t I tell you?

To make a long story short…
This is the first pellet rifle I have not been able to shoot well. It simply refused all my attempts to shoot a group no matter what I did. I tried a total of seven different pellets over a period of several hours and nothing worked. I tried holding it tight, loose and not at all. I shot it off the flat of my palm, the backs of my fingers and straight off the sandbag–nothing worked. 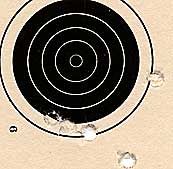 Best group of the session was this horrible showing. Notice, though, that three pellets are touching. While they aren’t even a great group for this close, they do show that the rifle has promise. 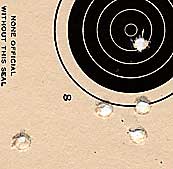 This is what the average group looked like.
I cleaned the barrel and encountered the tightest barrel I’ve ever seen. The brass brush was so bent after cleaning that I threw it away–the first time I’ve ever done that. But even after that cleaning, the rifle remained inaccurate.

I checked the screws and they were all as tight as they would go. I wiggled the scope and it was tight. While many shooters blame their scopes for inaccuracy, I have found that it’s seldom them that causes massive inaccuracy. This scope may still be bad, but I’ll not blame it yet.

Then I wiggled the muzzle. To my surprise it rocked from side to side a quarter of an inch! Then I cocked the rifle and positioned the barrel halfway up (closed). It would not remain in position on its own. The baseblock is loose in the forks. No way is that rifle going to be accurate until that’s fixed. I’ll examine some other things before testing the rifle again, too.

By this time, I’d spent the better part of a day on this rifle, so I decided to call it quits and make my report. There’s more work ahead before this problem is resolved, so we will have a part 4.

Editor’s note: There never was a Part 4. I was so discouraged by that rifle that I got rid of it. I know the story would beb better if I had persisted and finally won, but sometimes you just have to walk away. 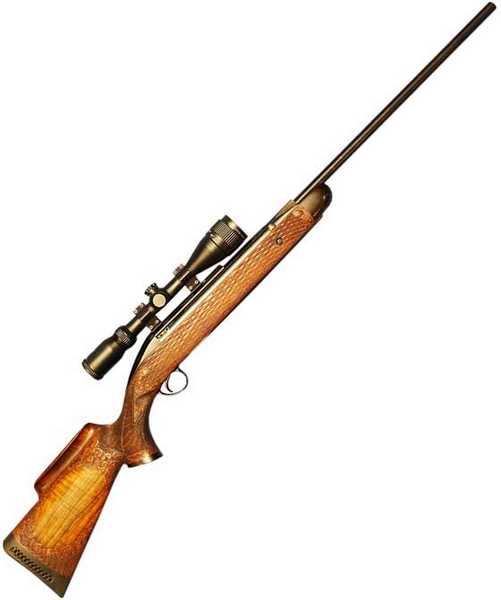