Today I start looking at the accuracy of the FWB 124 I picked up at this year’s Findlay airgun show. I had already shot it on the set of “American Airgunner” several times, but this will be the first formal test where I can actually see how it’s doing.

It’s 10 shots per pellet at 10 meters off a rest. I used the artillery hold because the FWB 124 is the poster-child of spring-piston air rifles that lunge forward when they fire.

For the benefit of our newer readers, the artillery hold is how we hold spring-piston air rifles so they will shoot their nest.

I held the rifle on the flat of my off hand, just in front of the trigger guard. And that hand was resting on a sandbag.

Cocking is so easy!

I had forgotten there was ever a time when we didn’t need to slap the muzzle to break open the barrel of a breakbarrel air rifle, but with the 124 you don’t have to. The ball bearing breech detent holds the barrel shut, yet opens easily. And cocking, which in Part 2 was measured at just 18 pounds of effort, makes this rifle feel like it was made for kids. 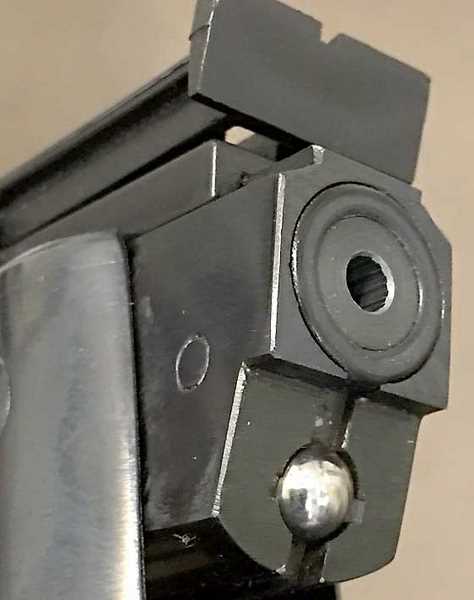 The spring-loaded ball bearing holds the breech tight, yet makes it butter-smooth to open.

The first shot at the 10-meter air rifle target with Crosman Premier 7.9-grain pellets struck just beneath the bull. I was using a 6 o’clock hold — aiming at the bull where 6 o’clock would be is the black bull was a clock face. To move the pellet to the center of the bull I slid the rear sight elevator forward about halfway and raised the rear notch. Shot number two landed close to the 10-ring. Sight-in was over.

Now that I knew my pellets were hitting where I wanted I shot 4 more before looking again. These five were tight enough that I finished the group with another five. 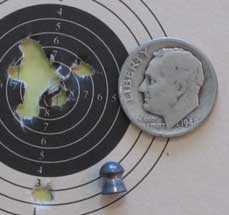 At ten meters 10 Ten Crosman Premier lite pellets went into a group that measures 0.447-inches between centers. The shot at the bottom was the first shot before the sights were adjusted.

That was a great beginning! I had forgotten just how nice a 124 can be. This one performs beautifully and has none of the usual 124 spring buzz. And the trigger is very nice, now that I’m shooting for accuracy.

The second pellet I tried was the RWS Hobby wadcutter. Nine of them grouped together but one was a little outside the main group. The overall group measures 0.609-inches between centers. Nine are in 0.492-inches 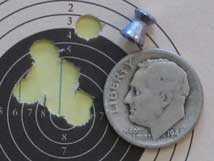 Next up were JSB Exact RS pellets. Ten went into 0.483-inches at 10 meters. This pellet cracked with each shot. I don’t know what it was because they were certainly traveling nowhere near the sound barrier. Maybe it just got to the target quicker and that was what I heard. 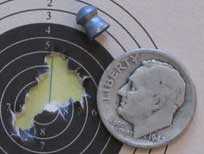 I normally test accuracy with three different pellets. Since I shoot 10-shot groups, this gives me a pretty god idea of whether the rifle/pistol is accurate or not. It doesn’t tell the absolute limit of accuracy unless one of the pellets happens to be the best in that airgun — it just gives a general idea of how accurate it might be.

Well, this 124 is a special rifle. It’s special because it’s a 124 and also because I plan to keep this one. Of all of the 124s I’ve ever owned, this is the one that will be for sale at my estate sale. I just don’t want to be without a 124 ever again, and this one has the best tune of any I’ve tested. So, I decided to shoot it a little more.

This domed lightweight is a pellet that often proves the best — especially if the rifle/pistol is an accurate one. And from what we have seen already, this one is.

Ten Falcon pellets went into 0.474-inches at 10 meters. That’s the second-smallest group of the test, and very close to the best one! 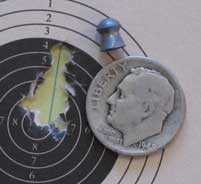 The last pellets I tested were RWS Superdomes. They did not do as well as the other four. Ten of them went into a vertical group that measures 0.727-inches between centers. If you look carefully you’ll see there are two distinct groups. It appears like 6 pellets went into the larger group below and the other 4 went high. I don’t know what to make of that, other than Superdomes may not be the best for this rifle. 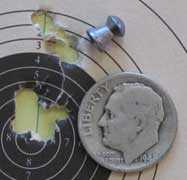 Ten RWS Superdome pellets made this vertical group at 10 meters. It measures 0.727-inches between centers

I know someone is going to notice that the dime I used for size comparison in the photos isn’t my usual one. What’s the deal? Well, I recently had the cataracts removed from both eyes and my near vision isn’t what it used to be. I could see that this was a dime when I picked it up from my desk drawer, but I couldn’t see that it wasn’t the right one — the one I wrote about several years ago. I still have the other dime and will use it in the future.

There you have it. I suspected this 124 was a shooter and I think this first test proves it. I plan to back up to 25 yards next and shoot with open sights again. Then I’ll scope the rifle and shoot a final test at 25 yards. Those two reports might take a while to happen because I have a lot more old airguns to show you.

The Feinwerkbau 124 is an all-time classic air rifle. Even today it holds its own with the best of them. It’s the sort of airgun that made this sport what it is! 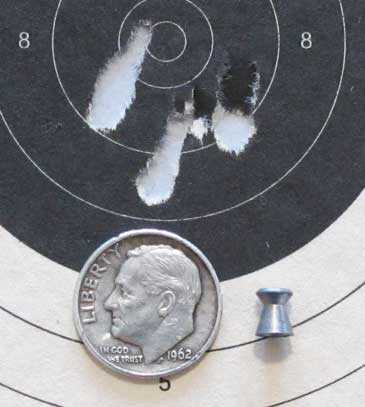 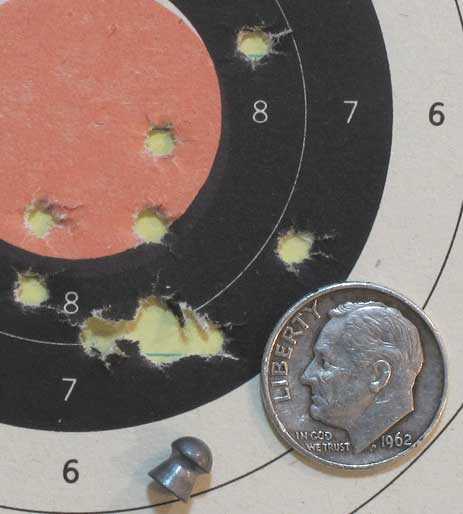