I told you I was going to test the heck out of the Umarex Gauntlet and I’m doing it! Today I’m shooting at 25 yards to test three things readers wanted to know about the rifle. Well, maybe I wanted to know them, too.

I’m shooting from 25 yards off a bench with a sandbag rest in front and a padded rest under the butt. The rifle is as still as I can hold it. All shooting is done single shot.

Does the POI shift with the reservoir pressure?

First I will test to see if a change in reservoir pressure changes the point of impact (POI). This is fairly common in PCPs, so we shouldn’t be surprised if it does shift.

It doesn’t matter what pellet I shoot, as long as both groups are shot with the same pellet. I selected the JSB Exact Heavy pellet, because there was something else I wanted to test, and this pellet allowed me to do that at the same time.

The rifle was filled to 3,000 psi for the first group. I used the single shot tray to load, because the Gauntlet I’m testing has a defective magazine, and also because we saw in the last test that the rifle is more accurate when it’s loaded single shot. 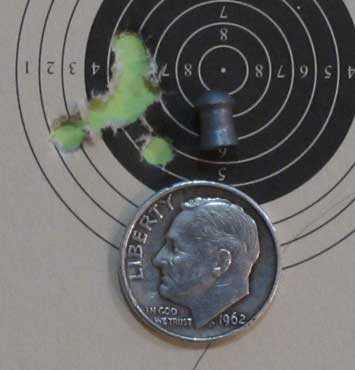 On a full fill of air the Gauntlet put 10 JSB Exact Heavy pellets into this 0.445-inch group at 25 yards.

Bolt probe in the way

Loading single-shot with the Gauntlet isn’t easy, because the bolt probe sticks out nearly halfway into the loading trough. I had to use two hands to make sure the pellets didn’t flip around backwards, loading this way. 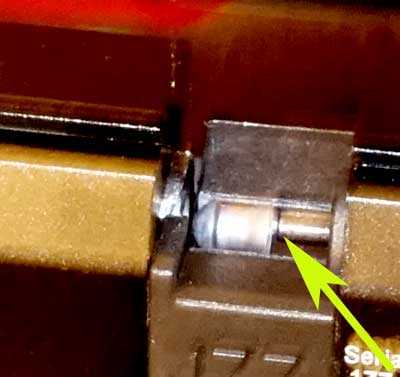 The bolt probe (arrow) occupies almost half the loading trough. You must take care that the pellet doesn’t get flipped around and loaded backwards.

This time 10 JSB Exact Heavy pellets went into 0.468-inches at 25 yards. That’s so close to the first group that there is no appreciable difference. You will always get a slightly different group size every time you shoot. We were looking for something that was significantly different — like a 0.70-inch group. 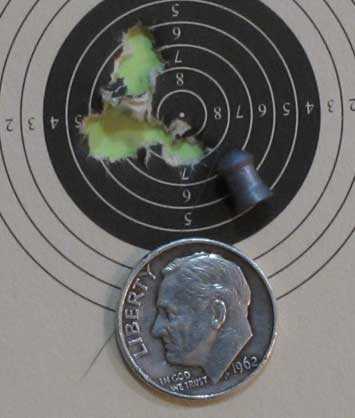 After shooting 30 shots the Gauntlet shot this group of 10 into 0.468-inches at 25 yards. The center of the group did move a little up and to the right.

There was a shift of the impact point though. The center of group 2 is 0.125-inches to the right and about 0.180-inches up from the center of group 1. Those measurements are approximations, but they are close.

Second thing that was learned is something that was not asked but was on my mind. In the Part 5 the group got smaller when I switched to single shot. But what I didn’t take into account was the pressure in the reservoir. The first group in the that test was with a filled rifle and the second time I shot the same pellet single-shot the rifle was on shots 29 to 38. I wondered if that had any difference in the size of the group — irrespective of the magazine/single-shot loading. From the results of today’s test I have to say there was no difference.

This time I wanted to see if the POI changes when the barrel is bumped, as one reader reported. Bumping a scoped rifle will almost certainly change the POI. Hunters know this better than anyone, and field target competitors whose rifles have dropped during matches have often lost their competitive edge, regardless of what has happened to their zero!

This time I filled the rifle to 3,000 psi and shot Crosman Premier Heavy pellets. The first shot answered the question, because it landed about one inch farther to the left than the last group of the same pellet in the Part 5. Look at that test to see what I mean. Obviously the POI does shift.

But I had a test to perform, so I shot 9 more Premier heavies into a group that measures 0.303-inches between centers. Yes, this one is a screamer! And it set the stage for a dramatic finish to today’s testing! This group is about one inch to the left of the last group of Premier heavys fired in Part 5. 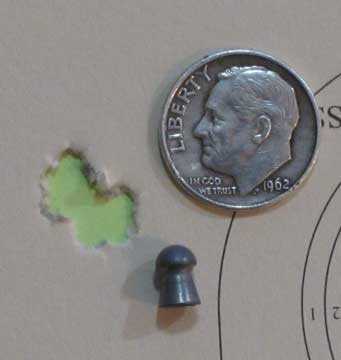 Ten Crosman Premier heavy pellets when into 0.303-inches at 25 yards. That’s a group! It’s also almost an inch left of the Premier group in the last test — so the POI does shift.

Okay, I didn’t do this scientifically. I just bumped the barrel to the right, since it was grouping this pellet to the left. I also filled the rifle to 3,000 psi again before bumping, to eliminate any possibility of a shift due to varying pressure. Then I shot 10 more Premier heavys and look what happened! 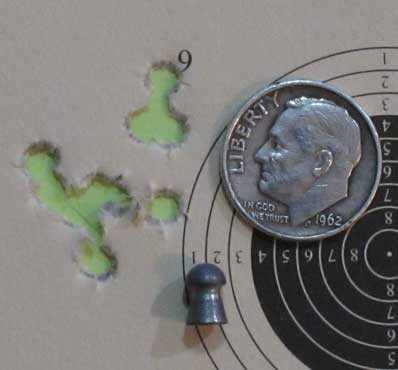 After I bumped the barrel to the right the group shifted by more than an inch. It also opened up to 0.838-inches between centers. Read the text for the explanation.

You can see from the photo that the pellets went everywhere. But it doesn’t tell the whole story. Shots 3, 4 and 5 make up the small group at the top right, and shots 6 through 10 are in the center of the lower group. In other words, the barrel was settling down as it was shot.

This experiment tells me to not bump the barrel. Don’t even pick up the rifle by the barrel or the POI will shift. However, if you do get a shift — STOP! Don’t re-zero the scope until 15-20 shots have been fired, because the barrel will “walk” (slowly adjust by itself) back to a point where it is under no strain. It may even go back to where it was before the bump. That’s what was happening in the group you see here. The next group would have been another small one, though I’m not sure it would have returned to the same place as the group before. It looks more like it’s walking back to where it was hitting in the last group of Part 5.

I think I have done everything I can at 25 yards, so next up is the 50-yard test. The Umarex Gauntlet is proving to be an interesting air rifle!