I’m at the Pyramyd Air Cup today. Veteran readers please help the new guys with their questions while I’m gone, because I won’t have much chance to answer email. I will be back in the office on Monday.

Today we begin looking at the velocity of the Benjamin 310 BB gun. There have been so many comments and requests for me to test different things with this gun that I won’t get through the whole velocity portion today. But I will get a start.

I mentioned the hollow bolt nose that differentiates the 310 from other Benjamin air rifles, but I don’t think all of you understood what I was talking about. I remember the first time I encountered this as a kid, it fooled me, too.

The 310 was made with a hollow bolt nose that the BB was pressed into for firing. 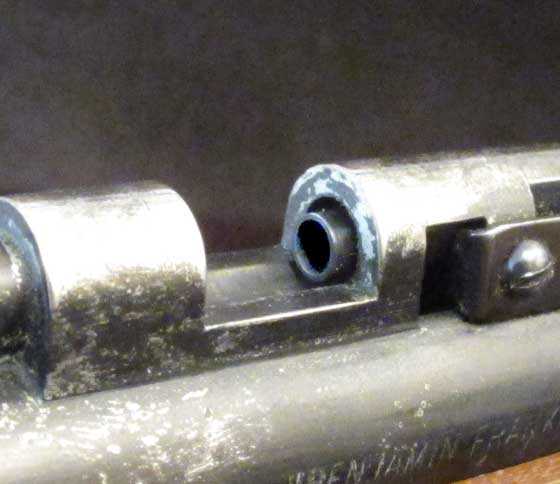 It’s impossible to see in this photo, but the inside of the bolt nose is chamfered to accept and retain a BB. 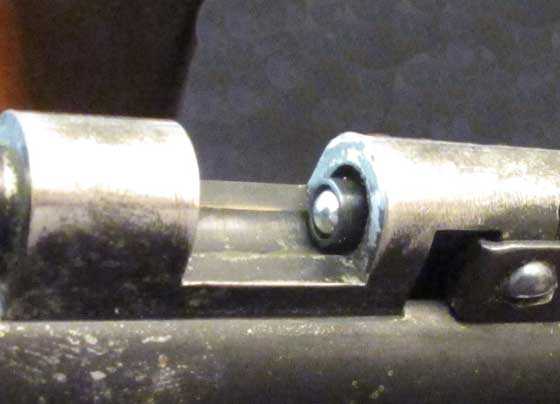 The BB is pressed into the bolt nose, where it sits until firing.

All that I want to test

Before I begin the tests let me discuss everything I intend testing. First up are steel BBs

I will start with Daisy BBs that are a standard BB gun ammo. They will establish the baseline for the 310. I will also test the Hornady Black Diamond BB that has proven so accurate in a variety of different BB guns in recent years. I couldn’t really say that I had tested the 310 unless I tried them. And of course there is the Daisy Match Grade Shot that is made specially for the Daisy 499 Champion BB gun. We know this shot is slightly larger than other BBs and as such may fit the bore of the 310 better. I have to try it to know.

Steel BBs are fine, but they aren’t all I will try. I also have to try some lead balls, starting with the H&N Smart Shot that is essentially a lead BB. Gotta try that because it’s the same size as a steel BB and the Benjamin 310 is a single shot. If it was a repeater like the Benjamin 700, lead would not be good because it can get jammed in the feed mechanism, but you just saw how this gun is loaded. There is no way you can jam anything and not be able to clear it easily.

Smart Shot isn’t the only lead ball I will try. I have some 4.4mm balls that measure 0.173-inches in diameter, so why wouldn’t they be okay? And what about the 4.45mm balls I recently acquired to test the Daisy Number 12 Model 29 BB gun? That gun failed during its test, so I still have a generous supply of those balls that measure 0.175-inches. The 310 may not accept them, but at least I’m not afraid of jamming the gun. I probably won’t try anything larger than that, but I do have other ammo if I need it.

Reader Mike in Atlanta also asked me about shooting darts in the 310. It was made for them, so why not? But I have shot darts in airguns before, so I know some things most shooters don’t. You don’t want to shoot airgun darts very fast, unless you have an unlimited supply of them and only want to shoot each one once. Darts get stuck in targets and get damaged when they are pulled out. Darts are not high-velocity airgun projectiles.

When I was a kid I thought just the opposite. Darts are sharp and I figured they would penetrate deeper, which they will until the point buries up to the body. Then they stop. I also thought they would be great on small game, which they definitely are not! Don’t ask!

Darts are for fun, and only for fun. They are for use on targets. They make weak airguns capable of shooting targets. Most Marksman 1010 owners learned to shoot darts because they were the only thing that worked well in those guns.

Airgun darts need good targets to keep from burying themselves too deeply in the target. A dartboard will work, but only when you shoot at the lowest velocity. That’s not what you expected — was it?

Traditional airgun darts like Air Venturi airgun darts have steel bodies and tips with colorful short fiber fletching. The colors are so you can score the target and know who each dart belongs to. The fibers also bunch up and help seal the dart in a smooth bore. 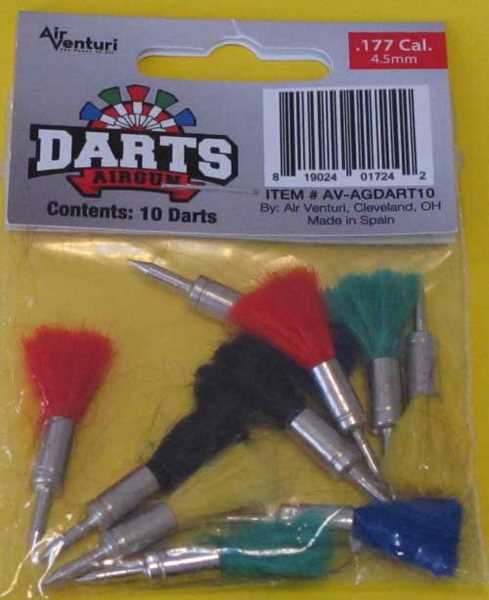 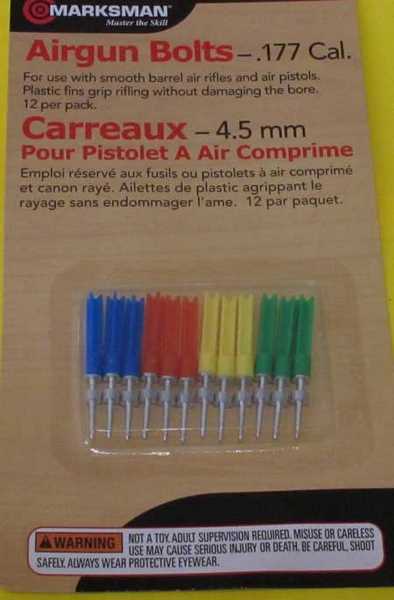 Then there are non-traditional airgun darts like Marksman airgun “bolts” are dart-like projectiles with which I have no experience.

The non-traditional “darts” come with information that is confusing at best. It says they are for smoothbore airguns, which is fine. But then it says the plastic fins grip the rifling. What rifling? Smoothbores aren’t rifled. Are they trying to say you can use them in both smoothbore and rifled barrels? If so, they left out a few important sentences.

Anyone hazard a guess what that is trying to say?

And I will also test several pellets in the 310, as well. Not too much to say about that — yet!

Now you know what I’m trying to test. Let’s get to it. We aren’t going to finish today, but we will get started. First up — Daisy BBs.

Something isn’t right. There is NO WAY two pumps should produce a velocity of 480 f.p.s. with anything. I was just goofing around, shooting the gun with two pumps. Then I tried the other strokes seen above and got those velocities. Something wasn’t right. So I tried 5 pump strokes a second time and got 647 f.p.s.

What I haven’t mentioned is that there is air remaining in the gun after it is shot on 2, 3, 4 and 5 pumps. I was careful to exhaust all of it before the next test shot. I was about to record the velocities of the follow-on shots when I noticed a hissing sound coming from the breech. Oh, no! Another oldie has bit the dust in the middle of one of my tests!

I was taken aback by this turn of events. This near-pristine BB gun that has been so lovingly cared-for all these years has given up the ghost in the middle of my report. I pumped the gun up and two minutes later it was empty. I was sad all the rest of that day and into the evening.

The next morning it hit me. What would I tell someone else who had such a problem? That’s right! I would advise putting several drops of automatic transmission fluid sealant in the gun and seeing if it would fix the seals. So, that’s what I did!

It took about 4 hours and multiple pumps and shots, but the ATF sealant did the trick. BB got his gun back! At least enough to continue the test. Still shooting Daisy BBs.

The valve does seem to be holding. That’s the good news. At the end of today’s test I put 2 pumps in the gun and shot it 36 hours later to see if it held. It did. So, I emptied the gun and then put in another 2 pumps and shot a Daisy BB through the chronograph. After that I pumped it once and shot it again and again.

Okay, the gun is very powerful after two pumps. I can shoot, then give it another pump stroke and shoot again at a similar velocity. And another after that. I am wondering if this is the way to conduct an accuracy test? I sure don’t need more velocity than the mid-500s.

Point number two — this gun seems too powerful to me. But I don’t have that much experience with Benjamin 310s, so the high velocity with BBs might be normal. But retaining air like it is isn’t normal for a single shot. At least not until they get over-pumped and the valve starts locking.  Every shot should dump all the air. This gun is acting like the Benjamin 700 repeater we looked at several weeks back.

A weak striker (hammer) spring could account for the air retention, but the gun shouldn’t be as powerful as it is if the spring is weak. I am puzzled.

Now that the gun is holding air I don’t want to get it resealed. The finish might suffer during that process. On the other hand, what should I do? Well, that’s where you all come in. I am listening. 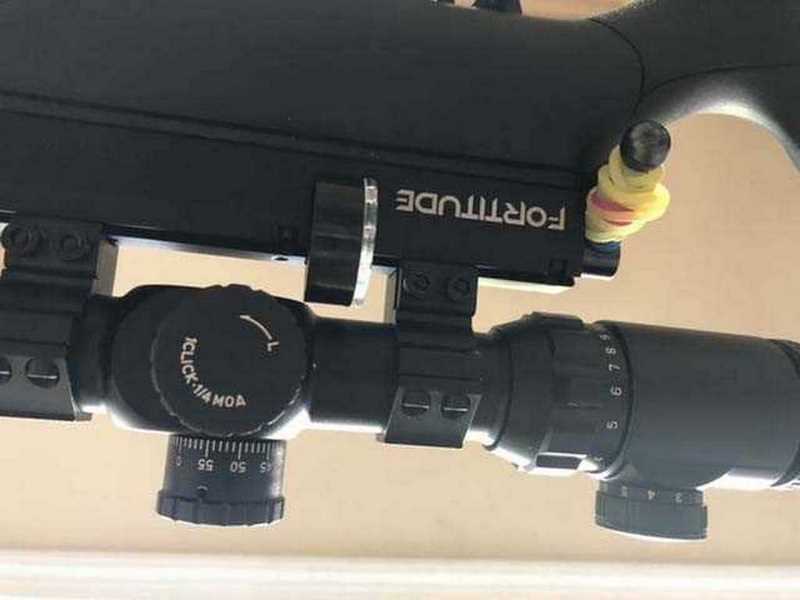 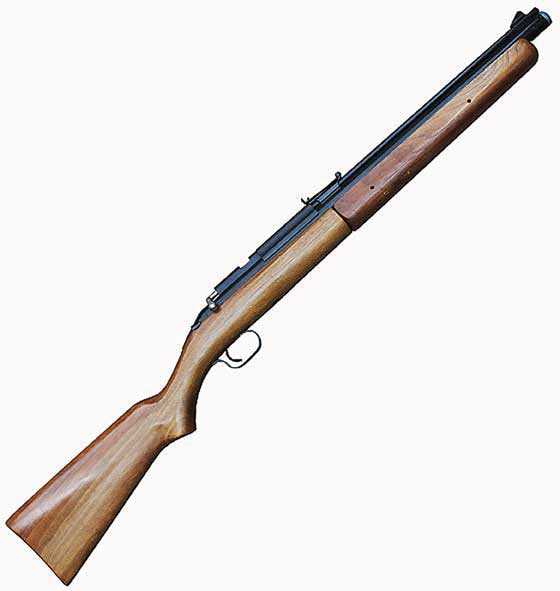