Today’s report is a follow-on to a 5-part series I did on the Webley Mark II Service rifle. Today’s post is by reader RidgeRunner, who now owns the rifle. He tells us about the maintenance he did on the rifle.

And now, take it away, RidgeRunner.

Those of you who have been hanging around for a while may vaguely recall BB doing a blog about one of these air rifles. What some may not know is my loving wife contacted BB and conspired with him to have that very air rifle be my Christmas present last year. Needless to say I was quite surprised — shocked is more like it. This lovely old lady is now a permanent resident at RidgeRunner’s Home For Wayward Airguns.

Something funny going on

With the Webley BB had sent me a new piston ring. I have wanted to replace the old one but have hesitated to go in as she has been shooting fine. Then the other day at a spinner flipping session on the back porch, I noticed she had developed a twangy vibration and a sharp jolt at the end of the firing cycle. As I was oiling and wiping her down to hang her back up a piece fell off. The barrel pivot pin had broken in half. I promptly ordered a new pin and retaining screw from John Knibbs. 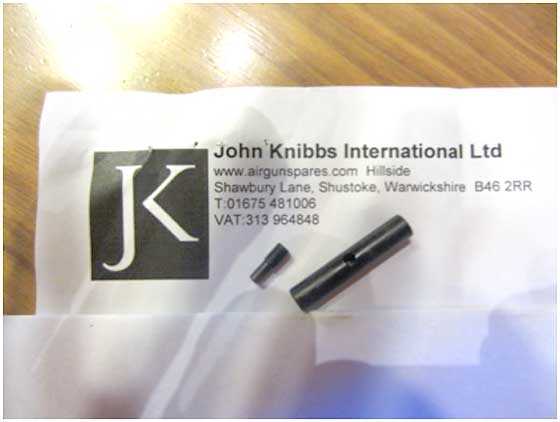 With having to replace the pin and the piston ring I decided it was time to go in. Of course BB asked me to take lots of pictures to share with you guys. I apologize for the quality of the photos as I am not as talented as BB and lack any type of Photoshop to fix them.

Before I start spreading parts all over the table though, I wanted to show you folks a little doodad that BB somehow overlooked in his review, the anti-beartrap mechanism. It is a small lever under the barrel that prevents the piston from slamming home after the air rifle has been cocked, even if the trigger is pulled. When the barrel is locked in the firing position, it depresses the end of the lever, unlocking the piston. 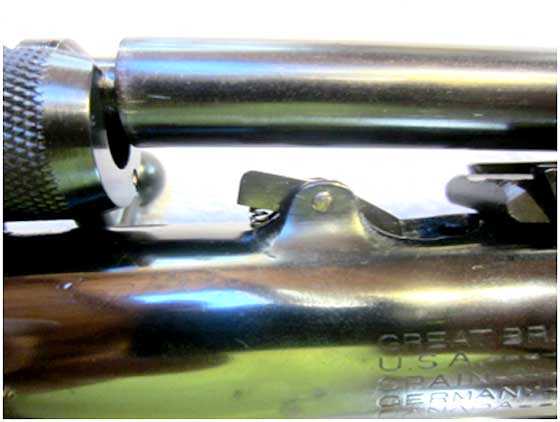 Barrel unlocked. The anti-beartrap device is grabbing the piston. 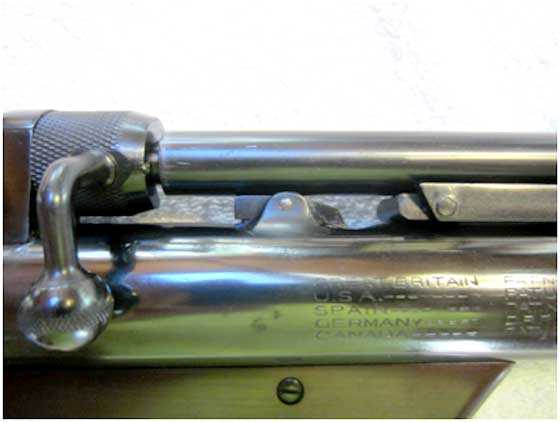 Barrel locked. The anti-beartrap is free from the piston and it can now fire.

Onward through the fog

My first step in the disassembly was to remove the barrel by pushing in the barrel retention button and sliding the barrel out of its cradle.

In the picture above you can see the barrel retention button, barrel cradle, barrel pivot pin and retaining screw. I next removed the retaining screw which allowed me to push out the broken pivot pin and then, by lifting up the cradle, I could slide it back until it disengaged from the piston slot. 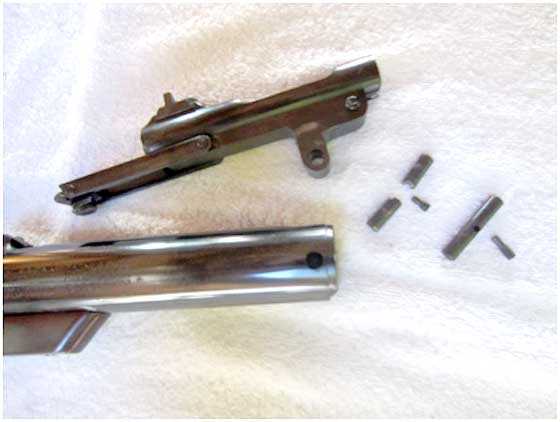 You can see in this picture the broken pin and the new one. I too noticed the new screw (below) seemed a bit long. It later turned out that the new screw would not work and I used the old one which works fine.

The next step I took, which really should have been before this last one was removing the stock from the action. Two wood screws held the butt plate and a long through bolt held the stock in place. 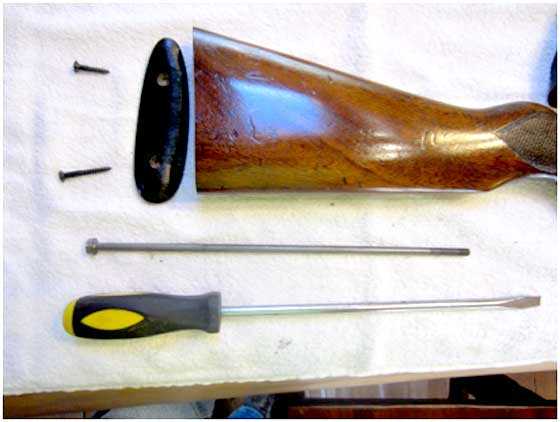 I noticed the stock had a pin which fit in a hole in the action which kept it from rotating. A very nice touch indeed. 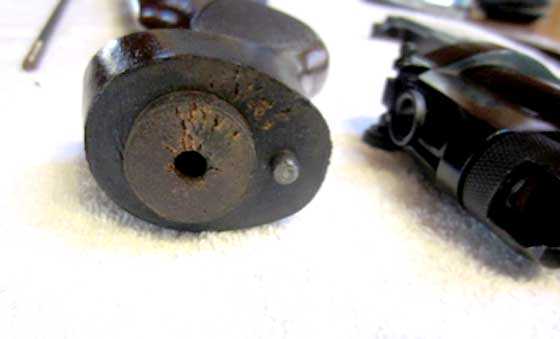 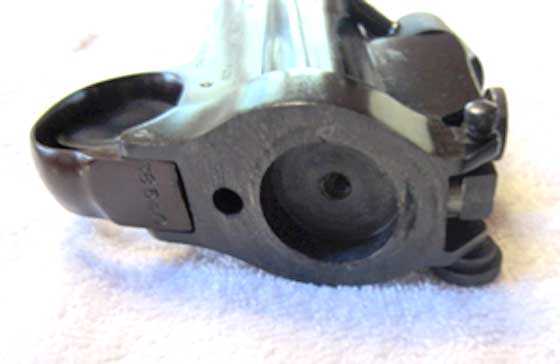 With the stock removed I could now begin disassembly of the action. Because this air rifle has been so well cared for over the years, this was a simple task. Taking a box wrench, whose end nicely fit in the slot of the compression tube plug, I began to unscrew the plug. I did not have to use any force as it turned with ease. 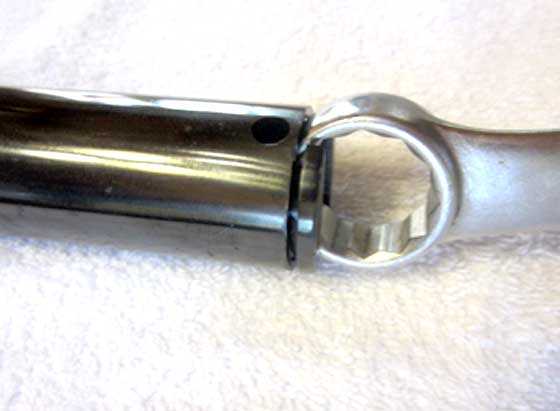 Removing the plug. The wrench acts like a big screwdriver.

Once I had it unscrewed most of the way I mounted the action in my spring compressor to finish removing it. I did not have the desire for the plug to go sailing about the room. 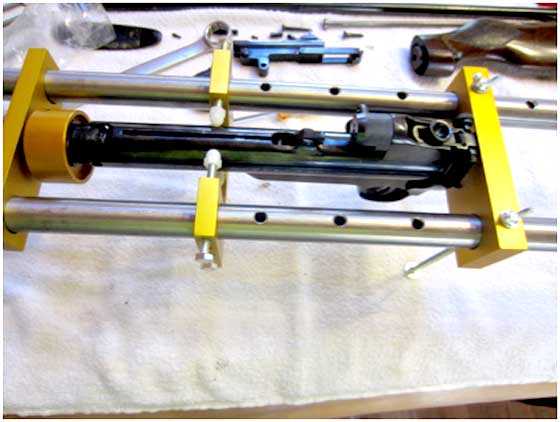 It was then a simple and safe task to back off on the spring compressor and finish unscrewing the plug. 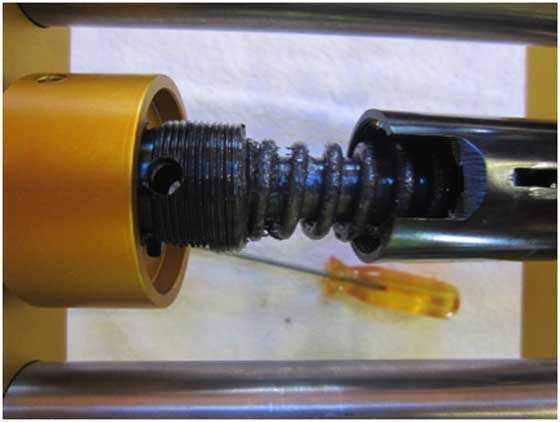 In the picture above you can see the amount of preload that was on the spring. I was then able to remove the plug with spring guide and spring from the action. 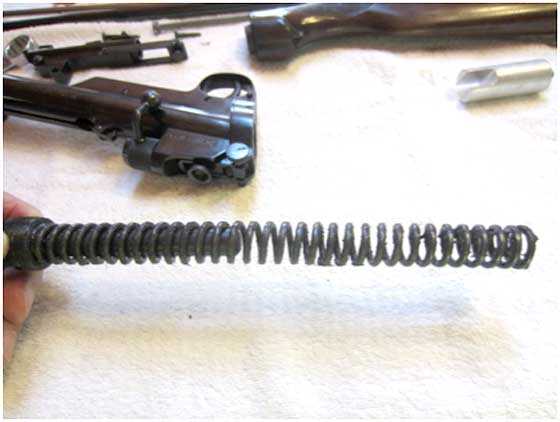 As you can see from the above picture the spring is in great shape and well lubricated.

The next step was to remove the piston from the action. This was accomplished by pulling on the trigger, lifting the end of the bear trap lever and sliding the piston out the end of the compression tube with a small screwdriver.

Notice the bronze piston ring on the end of the piston. Feinwerkbau used a similar arrangement on their older 10 meter air rifles. 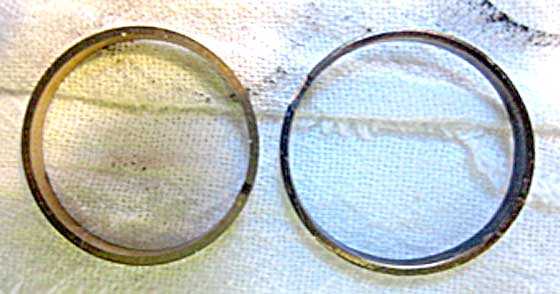 Here is a picture of the two rings. Can you tell which is which? It was a simple matter to remove the old ring that was worn and install the new one. 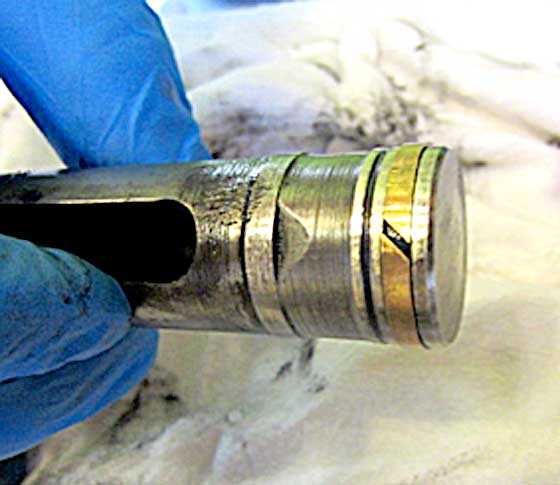 Here you can see the new ring installed on the piston. Notice the notch just below the ring where the anti-bear trap mechanism engages the piston.

With this done it was now time for reassembly. This was accomplished in the reverse order with one exception. I found that when I was reinserting the piston that I could not get the sear to clear, requiring me to remove the trigger assembly. I did not take any pictures of this, but it was a simple matter of removing three screws. The trigger is a single stage direct sear type. It would be difficult for it to be much simpler.

Now that she is all back together and working properly, I will have to do a velocity and accuracy test so as to compare to BB’s previous tests. Hang on; I will get a round tuit.