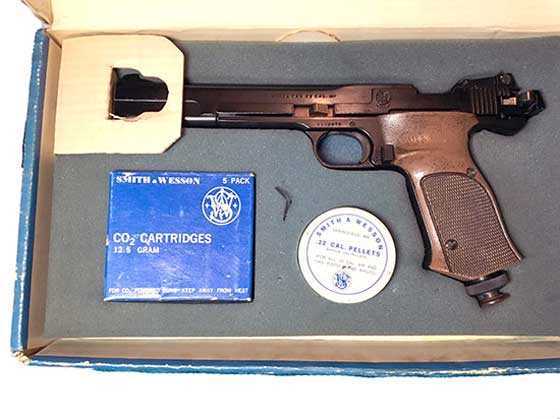 Today’s report is written by reader 45Bravo. This is his report to us on the Daisy air pistols that followed the S&W 78G and 79G.

When I get a Daisy Power Line Model 41 in I will do a article on that model.

The S&W 78g and 79g (.22 and .177 calibers respectively) were made by Smith and Wesson for owners of their Model 41 .22 rimfire target pistol, to be able to practice target shooting indoors or in their yard. The first ones were made with an adjustable trigger, and 2-stage power selection, and adjustable power overall through changing the hammer spring preload.

These pistols were made from 1970 until 1978, at which time they sold the tooling to Daisy. Daisy continued production under the model numbers 780 and 790.

After the sale when a recall was issued or when Smith & Wesson guns needed service, they were to be sent to Daisy for the work to be done. When the modifications were completed, the frames were stamped with the letter D near the piercing cap. Any guns produced after the recall came with the modifications already done and did not need to be stamped. 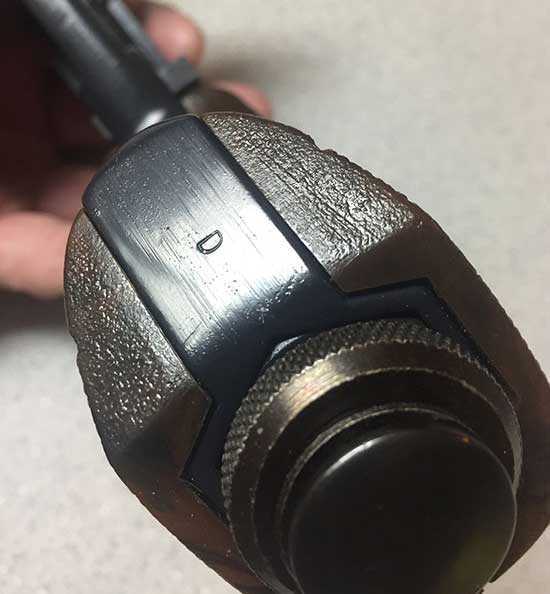 Every new modification to the pistol by Daisy reduced the cost of the pistol, and in the opinion of many people, also reduced the quality of the guns.

Now that we have covered a little of the history of the guns, let us look a little deeper. 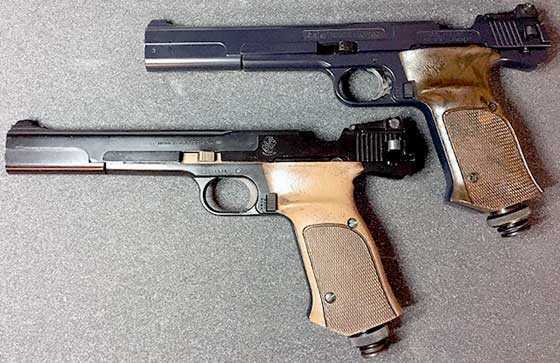 The early Smith & Wesson 78G is the bottom pistol with the lighter color grips. The Daisy 790 is at the top.

What’s on the outside

Pistols from the two manufacturers feel the same, and they look the same. The differences are in the details. The early Smith & Wesson guns had very light colored and cheap-looking plastic grips. As time passed they improved the look by making the plastic grips darker with more pronounced colors and simulated grain. Daisy kept the nice-looking grips in their production.

When Daisy first took over production, from what I understand, they used some of the leftover parts from Smith & Wesson where they could. They also changed things in other places. Daisy changed the rear sight to a plastic one. The bolt release was changed to a plastic part, but the bolt itself is still metal. And the entire assembly was simplified. Daisy did improve one thing, on the loading bolt they added a third position, that lets you store the gun with the bolt partially retracted from the barrel so the bolt seal o-ring is not compressed.

Over their production run, Daisy simplified the power adjuster to a 2-piece design and made it out of plastic. They changed the barrel retention system and the power-adjustment system to a pin near the muzzle instead of the screw-in system of the Smith & Wesson. 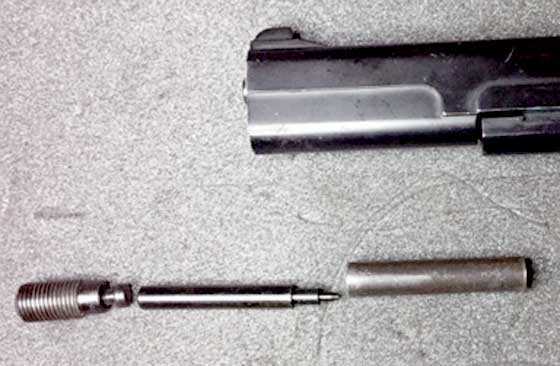 This photo shows the Smith&Wesson power adjuster out of the gun. 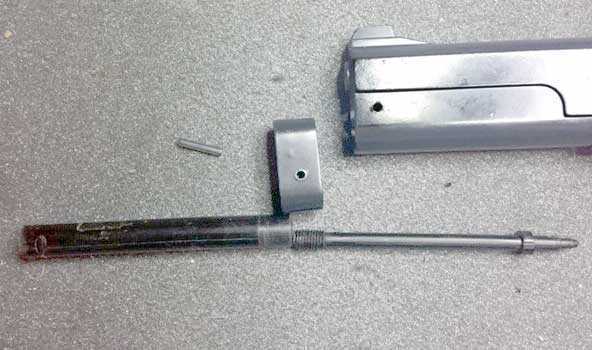 The Daisy 790 power adjuster out of the gun.

Daisy changed the transfer port from a metal one, to a plastic one. Daisy changed the trigger from the sintered metal trigger of the Smith & Wesson to a cast one, and modified it to where the safety can be engaged with the gun uncocked. 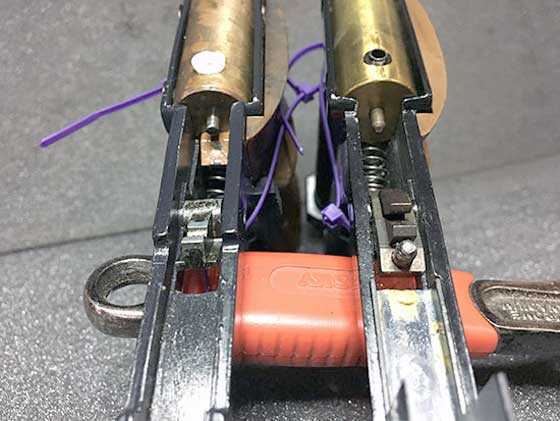 Here is the Smith & Wesson (right) and Daisy (left) lower receiver side-by-side. You can see the white plastic transfer port Daisy used. The zip ties are just holding the trigger and trigger springs in position for the photos.

Daisy changed to a 2-piece hammer. It offers greater safety, so when you fire the gun, the hammer strikes the valve stem, but when you release the trigger, it then moves the hammer upward and lets it rest on the valve face. It cannot fire the gun unless the trigger is held all the way to the rear. 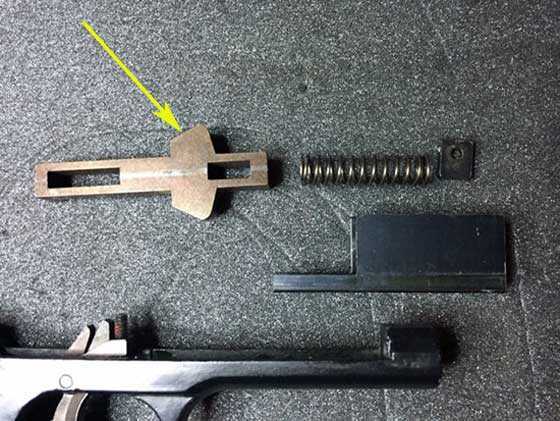 The hammer/striker in a 78G (arrow) is one solid piece.

The 790 hammer is 2 pieces — an inner piece surrounded by an outer shell. 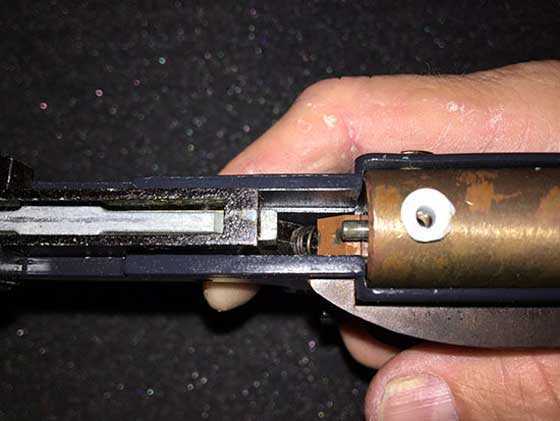 The Daisy 790 hammer shown here is cocked — ready to strike the valve stem when released by the sear. 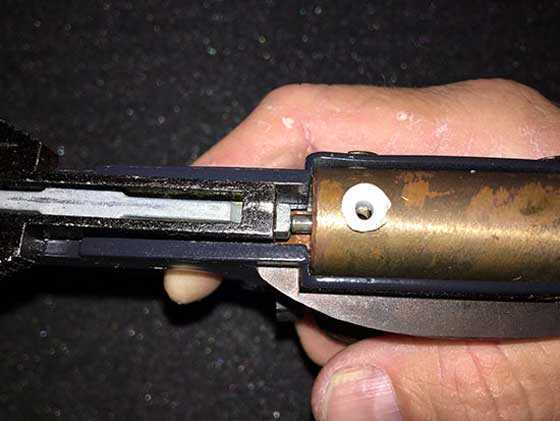 The 790 trigger/sear has released the hammer and it has impacted the valve stem, releasing gas. 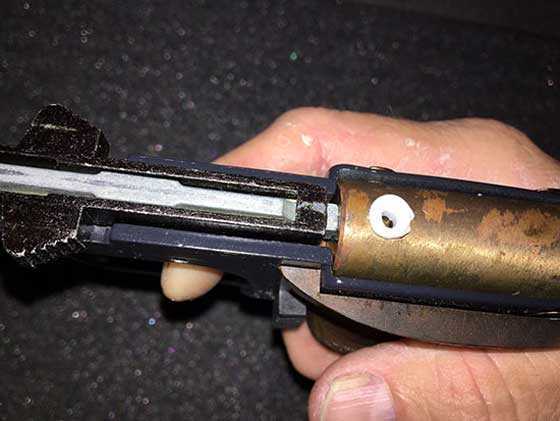 After firing the trigger has been released and the inner part of the 790- hammer has shifted up against the valve body. It cannot touch the valve stem now.

These changes made the Daisy trigger safer, but it’s also extremely long and heavy, making the pistol very hard to shoot well. Daisy also removed the hammer/spring guide channel from the front of the lower receiver. That can be seen in the photo above that shows the two lower fames next to each other..

Over the Daisy production run, I have found 4 changes before Daisy released the chrome-plated Model 41 air pistol. The pistol tested is what I consider to be a third change model.

When the Model 41 came out, they changed the CO2 cartridge arrangement. The pistol now positioned the cartridge with its tip up, and had a simplified CO2 cap, instead of the more expensive striker piercing cap of the earlier models.

The o-rings of the bolt probe, and the valve arrangements still interchange with the earlier guns, so resealing them can still be done.

This last model was a chrome-plated airgun that was more of an homage to the Smith and Wesson 41 firearm than a serious informal target air pistol. The Model 41 was the last gasp for the design, and was in production for a very short time, and you don’t see very many for sale online, and even finding images online of the Daisy model 41 is difficult. 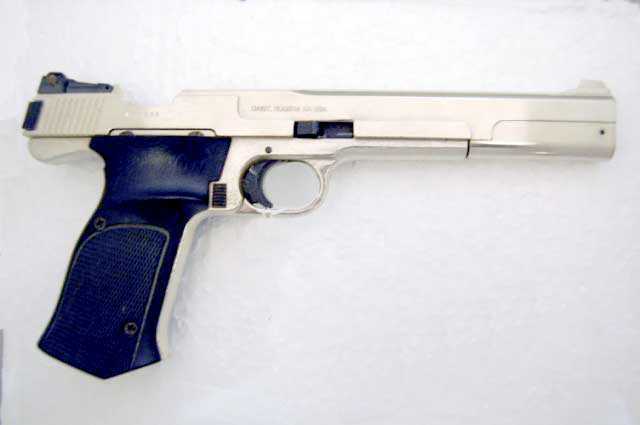 I see more 78g models than 79g models, and in my opinion, of the entire run of manufacturing from both companies, the rarest model seems to be the Daisy model 41.

I see references online about a Daisy 7900 air pistol, but have yet to see an actual image of one, much less actually see one in person. After a conversation with the Daisy Museum, I learned that Daisy never produced a model 7900 air pistol. Apparently it is an example of the Mandela effect.

So, how do they shoot?

I chose to use Crosman Premier pellets for the test as most shooters will buy a tin of them before they buy or test more expensive pellets.

With the exception of the Daisy 790, all shooting was done with the power adjusters set in the middle of their adjustment ranges. The 790 was not adjusted as the plastic velocity adjustment is delicate and prone to breaking if adjusted with a screwdriver. Also, it is set where it shoots the best with its preferred pellet.

Temp: 85 deg. F.
All guns and co2 cartridges were allowed to warm up to ambient temperature in the shade.
Timed 30 seconds between shots.
Recorded with a Caldwell Ballistic Precision Chronograph 1 ft from the muzzle.

S&W #2074 has Mac1 upgrades in valve poppet and valve spring, and o-rings

S&W #3248 has factory poppet and valve spring, but new o-rings

This particular Daisy is very accurate even with the heavy trigger. We all know Daisy can make an accurate barrel (the Daisy 953 is a prime example). Unfortunately they had to let their lawyers into their triggers.

{Editor’s note: Daisy is the highest-profile airgun company in the world. Many people who are not airgunners use the term Daisy to mean all airguns. As a result, they are the targets for many lawsuits. Their lawyers have to be vigilant, just to stay in business.}

Because of its accuracy when I first bought it a year ago, I decided to put a complete Mac1 kit in it, and original Smith & Wesson trigger parts in this pistol.

We will cover accuracy in a future article.

Smith & Wesson started off with a great pistol, but because of legal pressure they had to delete some of the better features.

They sold the airgun division to Daisy, who chose to make more compromises, which the customers did not like, so eventually through lack of sales it was ultimately dropped from production.

The aftermarket poppets seem to shoot more consistently than the factory ones.

They were made in the USA, they can be accurate, they can be resealed, but trigger wise, you get what you get, as aftermarket trigger upgrades are nonexistent — unless you find someone on eBay parting out an adjustable trigger Smith & Wesson.