Today we test the accuracy of the Smith & Wesson 77A multi-pump pneumatic air rifle, but first we have an experiment to do. On Friday I told you I had added ATF sealant to the rifle’s pump cup, and during shooting it got blown through the valve to get onto every internal seal.

Here is the deal. If the ATF sealant was the cause of the velocity increase, the velocity with Crosman Premiers from a cold rifle with 13 pumps would be close to 594 f.p.s. If it was just due to the seals heating while operation the velocity would be closer to, well, I don’t have a velocity from a cold gun shooting Premiers on 13 pumps, but with 12 pumps it shot 545 f.p.s. So perhaps 555 or 560 f.p.s. from a cold gun, if heated seals were the main cause. But, if it was a combination of the ATF sealant and the heated seals, then a cold gun might give me around 575 f.p.s. or so. That’s faster than it gave before when cold, but not as fast as it gave at the end of testing last time.

All it takes is one shot on a rifle that hasn’t been pumped or shot in 20 hours to tell us whether the sealant, or heating the seals or both are what’s behind the velocity increase. And the shot registered 580 f.p.s. That is pretty convincing evidence that the ATF sealant did a lot of the work, but heating the seals through operation was also involved. This is one more proof that AFT sealant is a benefit for the seals in pneumatic and CO2 airguns.

Now it was time to test the rifle for accuracy. S&W has not established a reputation for airgun barrels, apart from the 78G and 79G pistols, so I didn’t know what the expect. Obviously I hoped for the best. Company ads claimed dime-sized groups at 33 feet, and we decided they were talking about 5-shot groups. Well, I decided but nobody argued with me.

I shot the rifle from 10 meters (32.8 feet) rested directly on a long sandbag. I decided to pump the gun 6 times per shot, and you have already seen how easy the 77A is to pump. I used the open sights that come on the rifle, though they have no windage adjustment, so I hope they are on. I shot 5-shot groups, just because this is a multi-pump pneumatic and I wanted to finish shooting before the morning was over.

The first shot was fired from 10 meters. It was a gamble, but I find when I use factory open sights they are usually pretty close to right on at that distance.

I fired the first shot with Crosman Premiers. Shot one hit the target paper an inch from the bull I aimed at, at 1:30. Okay, it wasn’t on target, but it was close enough to finish the group — I thought. Wow, was I in for a surprise! Five Premiers landed in 2.24-inches at 10 meters. The target is a poster-child for demonstrating when pellets aren’t suited to air rifles! No more Premiers for this gun! 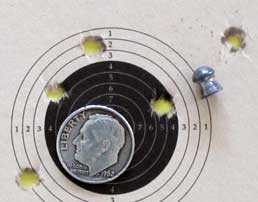 Next up were RWS Superdomes. They went into 0.758-inches at 10 meters, which is a lot better than the Premiers. I wasn’t pleased with this group, but I was relieved. 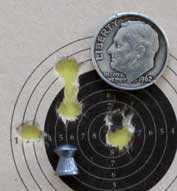 The next pellet I tried was the ubiquitous RWS Hobby. Five of them went into 0.465-inches at 10 meters. Now, we are talking! This is a group that will just barely hide under an American dime, so the S&W ad was proved correct.

The last pellet I shot was the JSB Exact RS dome. I though they might be the ones, but alas, the best-laid plans… Five pellets went into 0.856-inches at 10 meters. It’s the second-largest group of the test to this point. 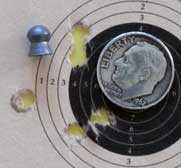 I wasn’t satisfied that I had found the best pellet, but of the four I tested, which one was worth testing with the UTG Reflex Micro dot sight? Duhhhhhh — Hobbys?

It didn’t take much to convince me that of the four pellets I had tested, Hobbys were the best. So I mounted the dot sight on the front 11mm dovetail and I would like to say here and now — yes, the 77A does accept 11mm scope mounts!

I had the dot sight on the gun in less than two minutes, but a quick look at the alignment told me the sight wasn’t on the paper at 10 meters. Put the dot in the center of a bull then pick your head up and see where the barrel is pointing. In this case it was low and to the left. I moved up to 12 feet and shot a pellet that hit the target paper two inches below and two inches to the left of the aim point. That’s at 12 feet. At 10 meters it wouldn’t have hit the backstop.

A quick adjustment and the sight was on target. Back to 10 meters and 4 more shots to refine the zero. Now I was ready to shoot a group. Five shots (yes, it looks like 6 shots to me, too, but I remember distinctly pulling 5 pellets from the tin) went into 0.925-inches at 10 meters. That’s worse than what the JSB Exact RS pellets did with open sights. What gives? 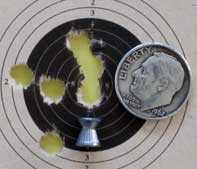 Yeah, I don’t know what happened, either. Five Hobbys (not six like it appears) went into 0.925-inches at 10 meters when the UTG Reflex Micro Dot sight was used.

I have no idea what happened! I just shot worse with a dot sight than I did with the open iron sights that came with the rifle. Was the dot sight on tight? Is the barrel loose? Were there gremlins in the room? Sorry guys, I don’t know — about the gremlins, that is. I do know the dot sight was tight and so was the barrel.

Hey, sometimes when riding into the sunset your horse throws you and you land in a cactus! There is a solution — don’t let it be the last time you test the rifle!

I like the S&W 77A multi-pump for several reasons. It pumps easy, has good repeatable power and feels great in the hands. I just haven’t found the best pellet yet. I found a couple of the worst ones — just not the best.

I have a thought about that. Premiers were horrible. Premiers are undersized and very hard. Hobbys were the best. Hobbys are oversized and made from soft pure lead. Maybe I need to shoot fatter pellets that are made from pure lead. H&N Field Target Trophys and Eley 5.6mm wasps both fit that description. So I’m not done yet. 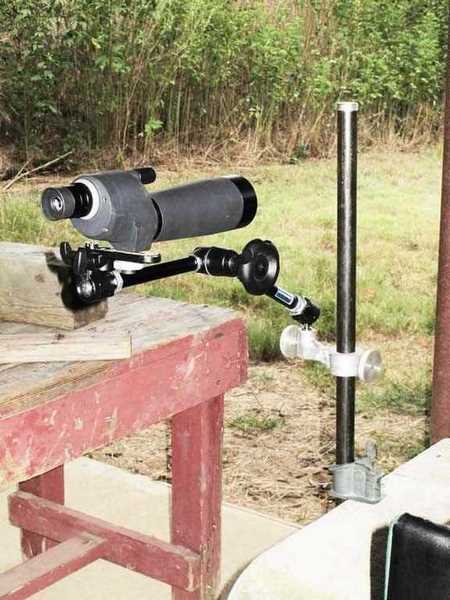