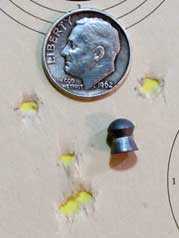 Today I start testing the accuracy of the Stoeger S4000E Black Synthetic Suppressed rifle. I will be testing with open sights today but remember this is a combo, and that’s what I really want to test. So today will be a shakedown to learn as much as we can about the rifle.

There are a couple things I want to find out from today’s test. First I want to know which pellet(s) the rifle likes. That way I won’t waste any time when the rifle is scoped.

I also want to discover how best to hold the rifle. The S4000E has a gas spring and they usually make rifles hold-sensitive. Of all the rifles with gas springs I have tested, so far only the Sig ASP20 has not been hold-sensitive. So I began the test expecting this rifle to be sensitive and I was looking for the best way to use the artillery hold.

I shot off the bench, using an artillery hold and resting my off hand on the sandbag. In case you aren’t aware, only a few air rifles can be rested directly on the sandbag and still be accurate, and it’s best to start your test thinking the rifle is sensitive to hold.

I shot 5-shot groups because I wanted to test as many pellets as possible. I used the open sights and, while I did adjust them as I went, I wasn’t looking to hit the center of the bullseye. I just wanted the group to be somewhere on the paper target.

Sighting-in the rifle turned into a longer test where I also searched for the right pellet and the best way to hold the rifle. I tried JSB Hades, Air Arms Falcons, and Air Arms Field pellets to no avail. The groups were too large to consider, but they did teach me something. This rifle shoots each pellet to a different location on the target. It’s so different that until I found the right pellets it didn’t make sense to adjust the open sights. But I did discover that holding my off hand back by the triggerguard is the correct way to hold the rifle. That set me up for the next discovery, which was finding the pellets that worked!

The first pellet that made some sense (with the right artillery hold) was the JSB Exact RS dome, Five of them went into 1.09-inches at 10 meters, with three of them in just 0.339-inches.

While this group is okay, it isn’t great. But the three pellets that are close tells me that I’m holding the rifle correctly and perhaps the best pellet is soon to come. If you remember from Part 2 I discovered two pellets that seemed like they might work in this rifle. The obsolete Beeman Kodiak looked good, but when I tried it in the sight-in today I was using the wrong hold. Rather than go back and try it again, because I can’t get more when these run out, I switched to the other pellet that looked good in Part 2.

The RWS Superdome is the first good pellet I found for the S4000E. Five pellets went into 0.555-inches at 10 meters. When I saw this I knew the rifle was accurate, because remember that I’m shooting with open sights that are fiberoptic! 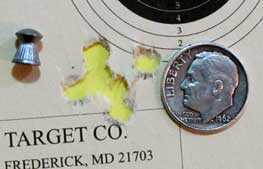 Remember those Beeman Kodiaks that I thought might be good? Well, the final pellets I tested were five H&N Baracuda Match with 5.53mm heads. These are the exact same pellets as the obsolete Kodiaks. They are just sold under a different name, and H&N gives us a choice of head sizes where Beeman didn’t. I picked up the tin of 5.53mm heads at random, and look what they did! Five pellets went into 0.438-inches at 10 meters, and that is with open sights. This rifle really can shoot! 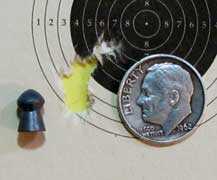 Remember I said in Part 2 that this rifle is smooth? Well, it really is! I have now had my face on the stock for 55 shots and can tell you the rifle doesn’t slap — not even a little. It does lunge forward a little, but even that is under control.

I promised to report more about the trigger after shooting the rifle for accuracy, because that’s where I get the most exposure to it. The second stage on the S4000E has a long travel and it’s easier for me to think of the rifle as having a single stage trigger, because that’s how the second stage acts. I got used to it right away and once I did and once I found the right way to hold the stock, look at my results!

I have said a lot about the hold in this report. That’s more of a note to myself for the next accuracy test, which will be with the scope mounted. Yes, the rifle needs to be held with the artillery hold (stock rested on the open palm of the off hand with a soft grip all around to allow the rifle to recoil as much as it wants to), but it isn’t fussy at all. I got the hang of the hold pretty quick and you can see the results in the final two groups.

I cocked the rifle 55 times and can now report that it’s not that hard. The one thing that’s different is because the barrel comes down so far the rifle becomes a little hard to cock in the final few inches of barrel travel. That’s a geometry thing, and I found it easiest to use my other hand to boost the effort. I cocked it one-handed maybe 10-15 times and the rest of the time I used the second hand at the end of the stroke. I could have gone on to shoot another 55 shots with ease, doing it that way.

Gentlemen, we have a winner here! I can tell that even before mounting the scope. In fact it was beginning to look that way back in the velocity test. And, the beauty of it is, at $160 — this rifle is affordable! It has the power and accuracy we need and the smoothness to complete the package. Stoeger has done everything right — as several readers who own other Stoeger rifles mentioned in their comments to the first two reports.

Next up will be the test of the scoped right at 25 yards. I can’t wait!