Today will be interesting, as I replace the post insert in the front sight of my HW30S with an aperture. The question is — will it be even more accurate? I don’t know and I want to find out!

The HW 30S came with a package of five front sight inserts, plus the one that was in the front sight, for a total of six. Two of the inserts have target apertures but only one is useful, The other one is a solid black plate with just a small hole in the center and it’s difficult to use because you can’t see most of the target.

The post on the left was used in the accuracy test in Part 10. Today I’m using the aperture insert on the right.

I tried to test the rifle exactly the same as I had in Part 10, even to the point of shooting the pellets in the same order. I shot the rifle off a sandbag rest at 10 meters, with the rifle resting directly on the bag. I shot 5-shot groups, just like before.

This time I was ready for the trigger and it didn’t fool me. I really like the way I have it adjusted.

First up were JSB Exact 8.44-grain domes. In Part 10 five of them made a 0.254-inch group. Today with the aperture front sight insert five pellets went into 0.163-inches. This turned out to be the second-smallest group of today’s test and it is also smaller than the smallest group shot in Part 10 (0.174-inches).

Next up was the JSB Exact Heavy that was the most accurate pellet in the last test (0.174-inches for five shots). Today the HW 30S put five into 0.149-inches at 10 meters.  This is the best group of the test and this pellet remains the best pellet in the HW 30S. 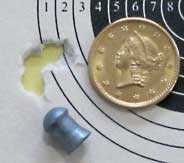 The HW 30S put five JSB Exact Heavy pellets into a 0.149-inch group at 10 meters. This is the only gold dollar group of the day.

The next pellet I tested was the RWS Meisterkugeln Rifle wadcutter. In Part 10 five of them went into 0.271-inches at 10 meters. Today five made a 0.249-inch group. Of the three pellets tested so far, all have delivered tighter groups with the aperture front sight insert. 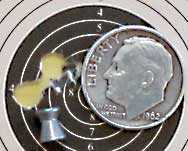 In the previous test five of the Chinese Qiang Yuan training pellets went into a 0.326-inch group at 10 meters. Today another five went into 0.281-inches. That’s the fourth pellet that was better with the aperture front insert. 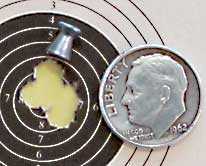 The last pellet I tested was the RWS R10 Match Pistol wadcutter. In the last test they were the second most accurate pellet, with a five-shot group measuring 0.178-inches between centers. Today the 30S put five of them into 0.46-inches, which was the largest group of this test by far. The only explanation I can offer for why this happened is that I relaxed too much while shooting this pellet. I never saw a bad shot, but it’s clear I wasn’t trying my best. Of all five pellets this is the only one whose group didn’t get better with the aperture insert in the front sight.

Wow! I guess I blew up on this final target. Five RWS R10 Match Pistol pellets made a 0.46-inch group, where before five went into 0.178-inches at the same 10 meters.

I think today’s test proves a lot. First, it proves that the HW 30S is every bit as accurate as airgunners have been saying for years. And Beeman R7 owners can extend everything seen here to their rifles, as well. The R7 is different in name only.

Next, I think today’s test strongly suggests that the aperture insert is slightly better than a post front sight element when shooting bullseye targets. It is of almost no use for other types of targets, but for bullseyes, it’s the best. It just makes accurate aiming that much easier.

The Vortek PG3 SHO tuning kit was well worth the effort to install. I can tell that the power of the rifle has increased dramatically by how fast the pellet gets downrange. The shot cycle is quick and smooth. And I bought the Vortek piston seal to go with the kit. I can’t say whether it’s better than the factory seal, but as long as I was inside I thought, why not?

And finally I have to say that the way I adjusted the Rekord trigger makes it one of my best airgun triggers. It’s super-light and crisp at stage two. If it only had an overtravel lock it would be close to perfect. I know several ways to put one on, but I’m still mulling that one over in my mind.

I have a surprise for you guys. It’s coming tomorrow.