Today we’re gonna have fun, fun, fun ’til her daddy takes her T-Bird away! Today we START the 25-yard accuracy test with the scoped Seneca Dragonfly Mark 2. And you know very well why I capitalized the word start.

I shot 5-shot groups off a sandbag rest at 25 yards indoors. Each shot had 8 pumps of air, which I would only do with the Dragonfly Mark 2 because it’s so easy to pump. The rifle is scoped with the UTG Bug Buster 3-12X32 scope that was sighted in at 25 yards in Part 12. So I didn’t fool with scope adjustments. You’ll see the groups wander around as I shoot. Okay, let’s get started.

First up was the H&N Baracuda 15 dome. They have done remarkably well in other air rifles and I wanted to try them in the Dragonfly. Unfortunately they didn’t do as well as I had hoped. Five pellets made a 0.79-inch group at 25 yards. With other air rifles that would be okay, but not with this one.

Next up were five Falcon pellets from Air Arms. They went into a 0.453-inch group at 25 yards. Now we are talking!

The third pellet I tried was the Air Arms 16-grain dome. These were phenomenal! Five went into a 0.331-inch group, but the last four shots are in 0.19-inches. That’s a trime group, folks. Of course the fifth shot (actually the first shot) opens the group, but I think this might be a great pellet for the Dragonfly.

Are you noticing how the pellets impact at different places? This is why I didn’t fiddle with the scope this time.

I also have to comment that the trigger, while not precise, is at least predictable. I think you can tell by these groups that I am able work with it.

And the pumping? Folks, it doesn’t get easier than this.

The one critique I will offer is that with the scope mounted I find the boilt handle too short. An extra half inch would be welcome.

The fourth pellet I tried was the RWS Superdome. I expected them to do well and they almost did, except … Except for pellet number three that loaded extremely hard. I think it was either mangled on loading or it wasn’t a Superdome. At any rate it went far from the group and opened it to 1.073-inches — the largest group of the test. The other four pellets are in 0.375-inches. 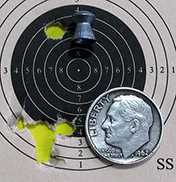 The RWS Superdome did well except for the third shot that also loaded very hard.

I should have blown that third shot off. That’s what I used to do when shooting field target. That’s when you announce you are just shooting the pellet out of the barrel and the shot doesn’t count in the match. As long as you announce it and don’t aim the shot it doesn’t count. Since I’m shooting inside my house I would have deliberately have shot it into the rubber mulch box, away from the target.

Still, I don’t think the Superdome is good for the Dragonfly. The other pellets loaded a little hard, too. Maybe they catch on something like the air transfer port. There are so many other good pellets for this rifle I think we can bypass this one.

The final pellet I shot was the 18-grain Air Arms dome. Hey guys — I had to pump the rifle 200 times to get this far!

Five of these went into 0.462-inches at 25 yards. And look where they went — outside the bull! This is another good pellet, but with that 16 grainer I think these are a backup.

Well I’ve said it before (many times) and I’m still saying it — the Dragonfly Mark 2 is a world-beater air rifle. Yes, I am aware there have been some startup issues with the intricate pump linkage. I am so glad the linkage on my test rifle is perfect because it gave me the chance to test the rifle as it was intended to be.

I am declaring the Dragonfly Mark 2 to be the Sheridan Supergrade of this century. I understand living on a budget, but folks — I don’t wanna hear about what you should have done. It’s here right now so now is the time! I know multi-pumps aren’t for everybody, but if they are for you, this one is the one.