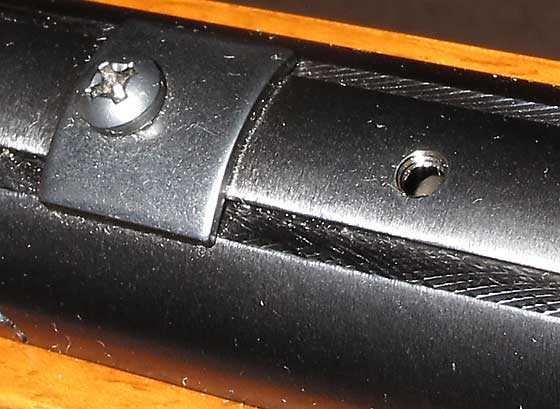 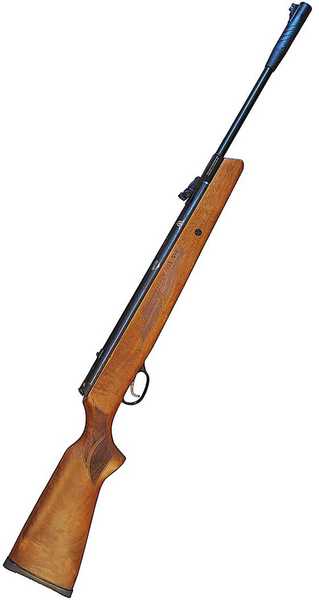 The first step was to mount the scope that came in the Hatsan box. It’s a 3-9×32 fixed-parallax scope that carries the Optima brand name. The scope mount is two-piece, and their straps have two screws each. The rifle comes with a recoil stop plate on top of the spring tube, and two different threaded holes so the plate can be moved forward or back. It was in the rear position on the test gun, and that proved best for the eye relief.

This recoil plate fits behind the reat scope ring to prevent movement backwards from the rifle’s recoil. The threaded hole to the right allows you to move the plate forward to reposition the scope rings.

Next, it was time to sight-in the rifle. I do that at 10 feet, which is very quick to get on target, yet gets me on target at 25 yards. If you would like to try my method, it’s explained in this article. I used Beeman Kodiaks for sight-in.

The first things I noticed
Right off the bat, I noticed the rifle shot very low at 10 feet. I expect it to shoot about as far below the aim point as the center of the scope is above the center of the bore, but this was twice that far. That means the rifle probably has some barrel droop, and that can be a problem. If the scope has to be adjusted up very high, the vertical erector tube return-spring relaxes and the tube starts to float. That means the point of impact will move around. That’s not good, and I’ll return to it in a bit.

The second thing I noticed was the image in the scope was very fuzzy. I had to set the scope’s power to 3x when I was at 10 feet, and even then the image was very fuzzy. That was the problem of the fixed parallax. When I backed up to 25 yards, the image cleared up quite a bit — but not completely. At 25 yards, I had to shoot on 5x, which was as high as I could go and still see the black bullseye clearly enough against the reticle to make the shot with any precision.

Since I sighted-in with Kodiaks, they were also the first pellet I tried at 25 yards. I experimented with two variations of the artillery hold — one with the off hand touching the triggerguard and one with the off hand under the rear of the cocking slot. The cocking slot hold is more stable; and with this rifle, it seems to produce the best results. That was the hold I used for the first group.

I fired only 8 shots because I couldn’t see the pellet holes through the scope. When I finally used binoculars to see the group, it was so large that I became discouraged and stopped shooting. In retrospect, that was a bad decision; but I’m getting ahead of myself. Eight shots went into a group that measures 1.218 inches between centers. 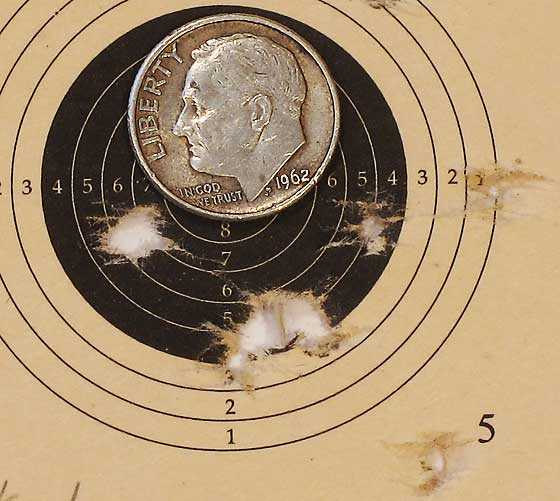 Eight Beeman Kodiaks made this 1.218-inch group at 25 yards.

I was now faced with a rifle that performed poorly and a scope that was unusable. I’ll get back to the rifle, but I was finished with the test scope. It is completely inappropriate for an airgun because of where the parallax is set, which is probably 100 yards. The optics are clear enough and the scope does adjust correctly, but if you can’t see the target even at 25 yards, the scope has to go.

The dilemma
If you’ve read this whole report til now, you know that I want this rifle to succeed. Of the three Hatsan-branded spring guns I’ve tested this year, this is the only one that shows any potential for decent accuracy. But as we learned in Part 3, the open sights on this rifle are not that useful, so a lot depends on using a scope. And the scope that came with the rifle is unusable.

So, I needed a better scope. I needed the best scope I have, which long-time readers will know is the Hawke Sport Optics 4.5-14×42 Sidewinder Tactical rifle scope. I use this scope all the time when I want to give the airgun every chance for success, so it was already mounted in two-piece 11mm scope rings. Mounting it on the Hatsan 95 was fast and simple.

I sighted-in the new scope at 10 feet, which proved uncharacteristically difficult. The pellets were wandering around the target and moving away from the group without reason. They were also hitting low, so I attempted to adjust them up; and that’s when I hit the top of the vertical elevation adjustment! The scope was adjusted as high as it will go, and it doesn’t matter how much quality the scope has, no scope does well when adjusted either too high or too far to the right.

The solution
The solution is to crank in a bunch of down elevation adjustment, which I did. The impact point didn’t drop that much, which is indicative that the erector tube had been floating before.

But the next group of Kodiaks was only slightly better than the eight shots fired with the cheap scope that came with the gun! What to do? I know the Hawke scope is good, and I know the rifle can shoot better than this — even with the open sights that aren’t very good.

At this point, I switched over to the JSB Exact Jumbo that weighs 15.9 grains. In Part 3, using open sights at both 10 meters and 25 yards, this had been the best pellet in this rifle. So, I cranked in even more down elevation (perhaps a total of 80-100 clicks at this point) and shot another 10-shot group. You can see from the photo that it isn’t very good. You can also see that it isn’t much lower than the first group. The Hawke scope was definitely adjusted way out of its useful range when it shot the first group. 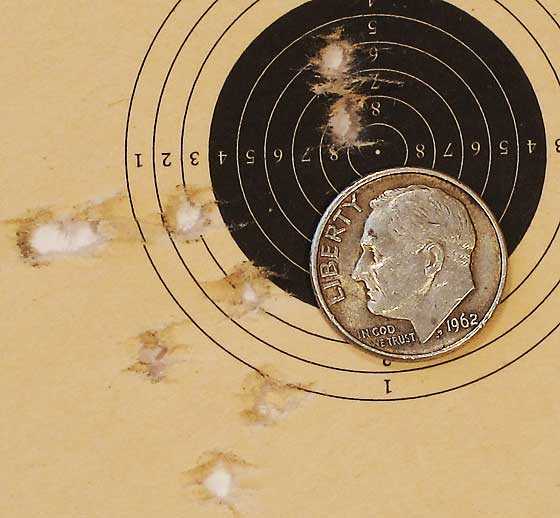 Ten JSB Exact 15.9-grain domes made this 1.208-inch group at 25 yards. It’s ever-so-slightly smaller than the group made by eight Kodiaks.

What happens next comes from all that firearm shooting I’ve been doing — so, those who don’t like me talking about “powder burners,” listen up! I have a good group at 10 meters and poor groups at 25 yards. Something is not right — with the test, or the way the rifle’s been set up — not with the gun. With the Nelson Lewis combination gun, I know that Nelson Lewis didn’t make inaccurate guns. If I can’t get mine to shoot, the problem lies with me — not with the gun. In the case of the Hatsan, I don’t know whether they can make accurate spring rifles or not — that’s what this test is all about. But if I get good groups at 10 meters, and I did, then I should not get poor groups at 25 yards. Things do not change that radically from 33 feet to 75 feet — they just don’t.

There’s one good reason why I tell you about the challenges I face when shooting firearms that are unfamiliar to me: So you’ll see what can happen and (hopefully) can be resolved by changing the conditions one variable at a time.

I think this poor rifle has been sabotaged by a lot of barrel droop and a cheap scope that’s useful only as a tent peg. Under all the mistakes, I think there’s a good rifle in the Hatsan 95. I believe it enough to give it another special accuracy test, and this time I’ll use good drooper mounts to get the scope back into its accurate range of adjustment.

The next test
The next time I test the Hatsan 95, I’ll have the Hawke scope mounted in drooper mounts. I’ll make certain that the scope is near the middle of its adjustment range — if not below. I’ll begin testing with the JSB Exact 15.9-grain pellet, and go from there. I’ll try a couple of the very best pellets I know, including the Crosman Premier, in an attempt to give this rifle every chance to succeed.

I’ll even clean the barrel with a brass brush and JB Bore Paste before testing. I think this is an accurate rifle. If it is, it’s also a real value among powerful spring rifles. If it isn’t, you’ll know that I gave it every chance to succeed.