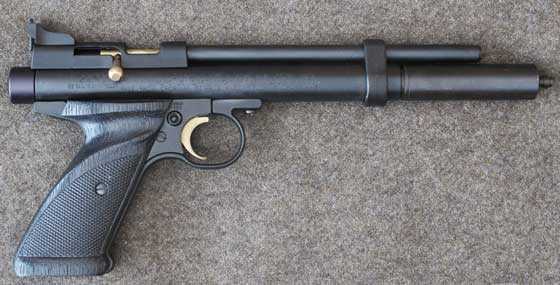 My Crosman 2240 has been converted to operate on high-pressure air.

Let’s look at what the conversion to air did for the Crosman 2240. Boy, was there ever a lot of discussion on that report! I think this may be one of the all-time most popular subjects on this blog.

Where we are
Here’s where I am with this subject. The 2240 is now converted. I plan to test it with 2,000 psi air today, and I do not plan to go higher. This is a test of what’s out there and some of the things that can be done with a 2240, but I’m not in the business of hotrodding this pistol. Many other folks are doing that very well; so, if you are interested in what’s possible, read what they have to say.

Today, I’m going to test the pistol with the conversion but with the stock striker spring still installed. In other words, if you simply screwed the tube into the gun and did nothing else (the front sight still has to come off to clear the tube), this is what you’ll get. I did change the face seal, which is why I disassembled the pistol in the previous report; but that wasn’t strictly necessary, since I am pressurizing to only 2,000 psi. I did it just to show how the entire kit is installed.

Before filling the first time
Before filling the gun, which is now done through the male Foster nipple on the end of the air tube, I put several drops of silicone chamber oil into the fill nipple. It came to me bone-dry, and I wanted all the seals inside the unit to get a coating of this oil. Then, I connected the gun to my carbon fiber air tank and slowly filled it to 2,000 psi. I say slowly, but as small as this air tube/reservoir is, it fills pretty fast. It probably took only 15-20 seconds to fill it all the way. You want to go as slowly as as possible to keep heat from building.

When I bled the air connection in the hose, the inlet valve in the air tube remained open and all the air bled out. So, I refilled it and bled it a second time. This time, it sealed as it should — thanks to the oil, I believe.

Shooting the gun
It was now time to test the gun. I had no idea what it was going to do, but I left my hearing protection off to hear if the first shot was loud. It wasn’t. Perhaps the gun is a little louder than it is when using CO2, but the difference is not that great. Of course, I used eye protection for the chronographing session, because the pellet trap is so close. I use a trap with duct seal to keep the rebounds down and the noise to a minimum.

Crosman Premier pellets
The first pellet I tested was the 14.3-grain Crosman Premier dome. I should add that I shoot only the pellets from the cardboard box, which is why I link to them, only. We were informed several months ago that Crosman planned to stop selling Premiers in the cardboard box and I stocked up on them. But I see they’re still available.

Notice that the gun performs similarly, regardless of what pellet was tested. The curve starts out slow, builds to the maximum quickly and then drops back to the starting point just as quickly. The three pellets gave a total shot count of 15, 16 and 16, respectively.

What comes next?
I can’t test the pistol for accuracy as it is right now because the front sight has no clearance to be re-installed. And the plastic 2240 receiver does not have a scope base on the receiver. Decision time.

I could get a steel breech for the 2240 from Pyramyd Air. While it will not accept the 2240 rear sight, it does have 11mm dovetails for a scope. That’ll work with the barrel that’s on the gun right now; but if I get a longer barrel, I’ll get a little more velocity from this same setup. So, I ordered a 14.5-inch barrel from an eBay vendor.

There are a number of different ways this can go with these parts, so I will wait to see what seems best once I have them.