A couple weeks ago, several readers had a discussion on the blog about shooting the Colt Single Action Army BB revolver with pellets. I didn’t read everything they said in detail, but the basic idea stayed with me for several days until I began to wonder, “Why not?” Back in 2013, I tested the Diana model 25 smoothbore pellet gun and discovered that it’s very accurate out to 10 meters — even though there’s no rifling to spin the pellet. Why wouldn’t this BB revolver also be accurate? read more

Tin cans?
Today, we’ll test the accuracy of the new Colt Single Action Army BB revolver. But before we get to that, there was a question from a blog reader named Claude about this revolver penetrating a steel food can. I said it couldn’t, but I secretly promised myself to test it first thing. Well, I was wrong. Steel food cans are thinner today, and this revolver can indeed pass through both sides! I shot the can at about 18 inches. read more

Well, it’s official. The Colt Single Action Army BB revolver I’m testing for you is a production model. The photos Pyramyd Air originally posted on their site were photos that Umarex sent them of a pre-production gun. All the blued guns will look like the one I’m testing. If you were concerned how your blued gun would look, it should look just like mine. By the time you read this blog, the images on Pyramyd Air’s site will have been updated. read more 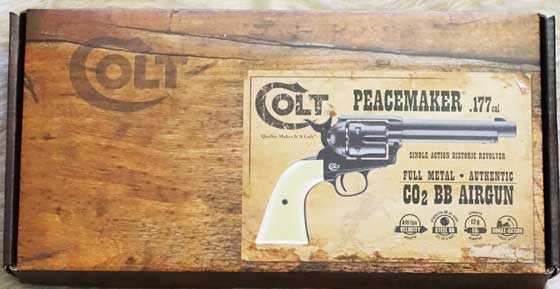 They even got the box right!

• Here it is
• Very realistic!
• Cartridge-fed
• Action is authentic
• Things that differ
• Overall — a good job!

Here it is
This is the surprise I wanted to show you last Friday. I was asked to hold off, but then the decision was made to let me run the blog today. The Colt Single Action Army BB revolver is here — or will be pretty soon. This is the airgun I’ve been waiting for since Wulf Pflaumer, one of the owners of Umarex, first told me about the impending arrival of the Walther Lever Action rifle. I was at his sister’s home in Maryland when he told me about the soon-to-arrive lever-action rifle. I was already a huge fan of several of his action pistols, so we had a great discussion about realistic airguns. read more

Many guns have replacement rear sights. I own a BSF S70 breakbarrel rifle that has a Williams peep sight that was either installed by Air Rifle Headquarters (the original company in Grantsville, West Virginia) or was a sight they sold for owners to mount. ARH did inform the customers of the necessity for the rear sight to have a complimentary taller front sight installed, and on my rifle that didn’t happen. I think this was an owner-installed sight that they probably hated ever since. read more

For example, there were some first-generation Colt single-action revolvers that had a very low estimate. One was a Wells Fargo-marked revolver that had been restored to almost new condition, but it had a factory letter proving that it was indeed a rare Wells Fargo model. It was in near-mint condition due to the restoration. I knew that a restoration on a gun like this would lower the value greatly, but not to an estimated $2,500-$4,000, which was the auction estimate! I would have thought that it would still be in the $8,000 to $12,000 range, despite the restoration. And, if original, perhaps $15,000-$20,000. read more