Today I test the accuracy of the Webley Mark VI with battlefield finish. I decided to test it with all 5 pellets that were used in the velocity test.

I shot from 10 meters, using a sandbag rest for the butt of the revolver. I held the gun with two hands for a steady hold. I shot 6 pellets at each target and I will describe what happened as we go. Let’s get started.

The first pellet I tested was the JSB Exact RS. The first three shots landed low, with one below the target paper. The group had to come up somehow. 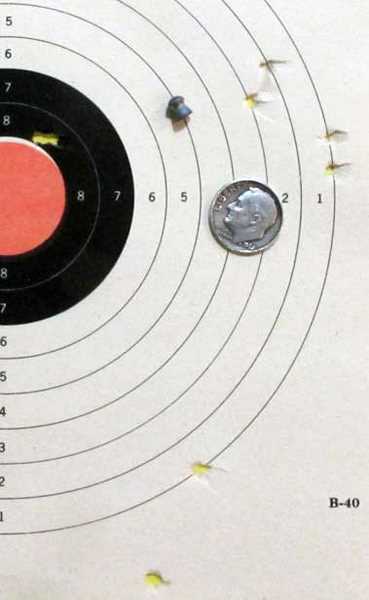 JSB Exact RS pellets hit the target low and left. One of the first three shots hit below the paper. I adjusted my sight picture to shoot the 6 shots shown above. One is in the bull — don’t miss it. This upper group measures 2.682-inches between centers.

I normally use a 6 o’clock hold when shooting bullseyes. With the Webley that resulted in the three lower shots. So I used a trick from my days shooting Colt Single Action Armys. When they shot low I held the front sight higher in the rear notch and still rested the bull on top of the front post. Look at the drawing below. 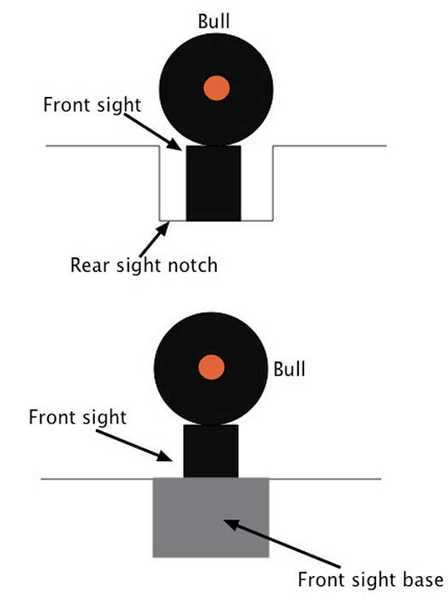 Once the front sight is elevated in the rear notch I then put the bull on top of the front post as always. That raised the strike of the pellet by about 4 inches at 10 meters, but it didn’t do anything about left and right. I continued to shoot the rest of the pellets using this same sight picture — hoping that one or more pellets would strike more to the left. Let’s see.

Why not fix the front sight?

Before we move on, some of you are wondering why I didn’t just file the front post down to raise the strike of the round. I didn’t for one reason — I didn’t want to damage the gun. Remember I said I learned this trick while shooting Colt Single Action Armys? The real ones (not replicas made by European makers) are worth thousands of dollars, and I won’t take a file to them. So, after reading Elmer Keith, I discovered this technique that works pretty well.

Next up were Sig Match Ballistic Alloy pellets. Six of them went into 1.886-inches at 10 meters. That is a lot better than the JSB’s did, though the pellets are still to the right of the bullseye. 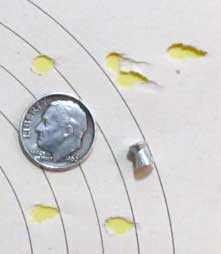 Though not small, the group of 6 Sig Match Ballistic Alloy pellets is much smaller than the group of JSB pellets fired before. Six pellets are in 1.886-inches, center-to-center.

The next pellet I tried was the Falcon from Air Arms. Six of them went into 2.358-inches at 10 meters. They are still hitting to the right of the bull. 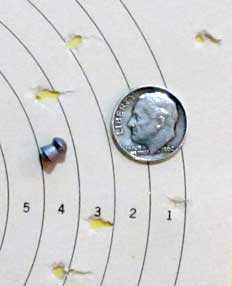 This is the wadcutter pellet that you can’t buy anymore. These weigh only 7 grains, while the current H&N Finale Match Light pellets weigh 7.87 grains. So, wouldn’t you know that they would group the best of all the pellets used, up to this point! Six went into 1.407-inches at 10 meters. One pellet just clipped the edge of the target paper, so I had to measure this group differently. I measured from the far edge of the pellet hole on the left to the near edge of the hole that just clipped the paper. Then I did not subtract a pellet diameter. That gives the same results as if I had measured to the far edge of the right hole and then subtracted one pellet diameter. 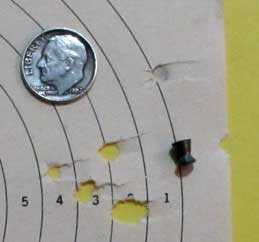 The final pellet I tested was the RWS Hobby. Six of them went into 1.407-inches at 10 meters. That’s right, this group size is identical to the group made by the Finale Match High Speed pellets. However, given the probable error in measurement, all we really know is that these two pellets are similar in accuracy. This was just a coincidence. But, since this is also the smallest group of the test, it’s nice that it was shot with a pellet that you can buy. 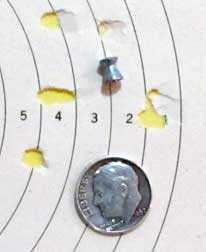 I had hoped that one or more pellets would group farther to the right, but as you can see, that didn’t happen. Now I wanted to see if I could do something about that by using still a different sight picture.

At first I tried holding all of the sight base all the way to the left of the rear notch. That threw the pellet about 5 inches to the left, which is way too far. Then I tried holding the base so I could see just a sliver of light on the right side of the rear notch. That got me closer to the centerline with the remaining five pellets, but the aiming wasn’t precise as before, plus it was too difficult to do consistently. Five Hobby pellets went into 1.806-inches at 10 meters. After that attempt I stopped, because this was no longer fun. 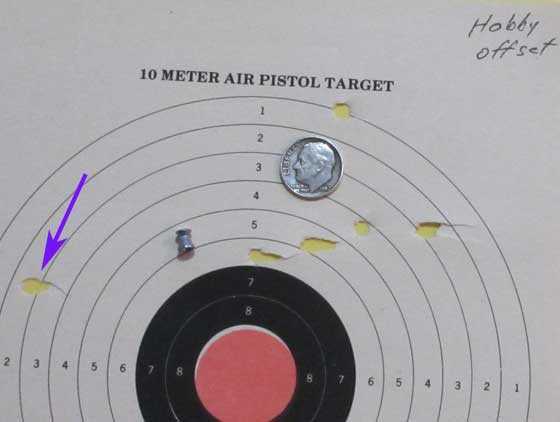 The first pellet (arrow) went too far left. Then I tried a different hold that worked — sort of. Five Hobby pellets in 1.806-inches at 10 meters.

Ironically, the fixed sights on my Mark VI firearm revolver are dead-on at 15 yards. I guess if I had to choose between the two I would rather have the firearm be the one that’s accurate.

Unfortunately the Webley Mark VI pellet revolver that I’m testing is not that accurate. And the sights are off, as well. It would be hard to hit a soda can at 25 feet unless you learned the gun very well. The good news, though, is it shoots best with the cheapest pellets.

From a realism standpoint, this one is a winner. I was very impressed by the effort that was made to copy all the details of the firearm.

It’s not going to be my favorite shooter, but I will probably keep it for the realism, alone.