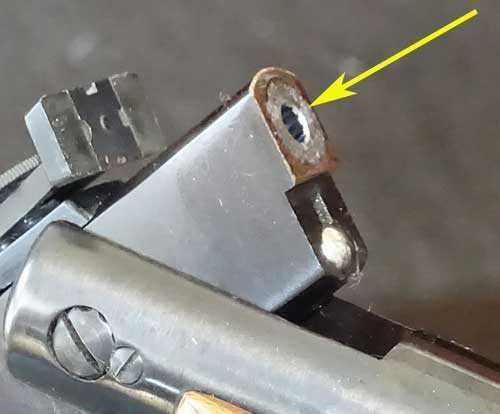 What a story I have for you today! Talk about a trip to Serendib! I started writing before something incredible happened, so I will leave the start of the report as I originally wrote it and realign things when we get to the good part.

We learned in Part 2 that the Krytox grease that many people tout is no good for dampening vibration. After tuning Michael’s Diana 27 I wanted mine to be as smooth, so in Part two I cleaned out the 20+-year-old lithium grease from my rifle and applied Krytox, as several people have recommended over the years. But no dice. With Krytox my 27 buzzed again, though not as bad as a factory gun might. It also shot a little slower, though I think that might have been due to the breech seal and not the lube.

The leather breech seal (arrow) is flat. It still works, but may not seal the breech as well as it should. Just to the left of the arrow’s point there is a small depression where some leather has fallen out.

I knew the breech seal was flat, but leather seals can be flat and still work. Mine, however, wasn’t just flat — it had a divot where some leather had popped out! Perhaps it wasn’t in tip-top shape any longer?

One way to tell if the old seal is bad is to install a new seal and test the gun. I learned from tuning Michael’s rifle that there is supposed to be a steel shim under the new synthetic breech seal, to raise it a bit higher. So, I ordered both parts for my rifle from T.W. Chambers & Co. and had them in less than two weeks.

I usually remove breech seals with a dental pick. It works for both synthetic and leather seals alike. However, when the leather is dry-rotted, it doesn’t come out in one piece. It breaks up and comes out in many small pieces. That’s what happened to this seal. Even though it was lubricated the entire time it was in the gun, it somehow has dry-rotted and become useless. I had to scrape the pieces out with a pick and a small screwdriver blade.

When the breech seal channel was clean I placed the steel shim in first, followed by the new seal. The new seal sits proud of the breech, and I think it will seal better than the leather seal did. 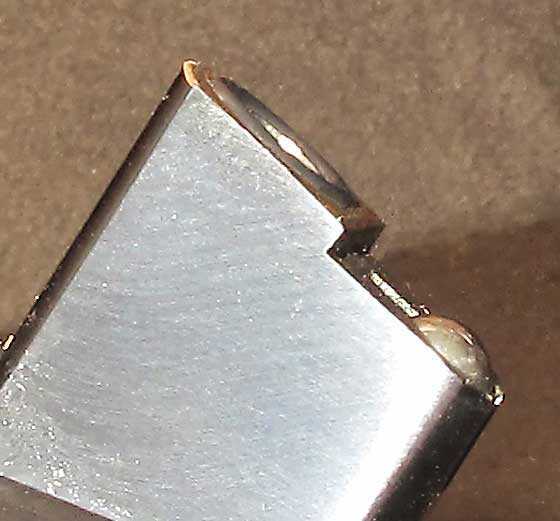 With the shim the new seal sits a little proud of the breech face.

Was there any change?

I said I would check the velocity again after installing the new seal, but before I tore the gun apart and relubed it with Tune in a Tube. It’s always good to start from a known point. The last time I chronographed the rifle was after applying Krytox in Part 2. At that time RWS Superpoint pellets averaged 435 f.p.s. with a 51 f.p.s. spread. That velocity was down from the velocity I recorded when my lithium grease tune was on the gun. At that time it was 465 f.p.s. with the same pellet.

The rifle is now smooth again! Apparently that dry-rotted leather piston seal was really letting the gun down and I never knew it. I suspected it was leaking because of the large velocity spread, but I had no idea that the Krytox tune would also smooth out when the breech was sealed better!

That is the first big lesson I learned today. I was all set to tear the rifle apart, clean it and lubricate it with TIAT, but now I don’t have to! Or at least I don’t want to. The Krytox tune is still not as smooth as Michael’s gun, but it’s back to being as smooth as it was with the lithium grease, and that makes me very happy. I owe those who recommended Krytox an apology for what I said in Part 2 and again at the beginning of this report. I still wouldn’t spend the money for Krytox, because it’s no smoother nor more powerful than a straight tune with white lithium grease that costs only a fraction as much — but it is a good grease.

Yes, there is more. Something else happened today that you need to know about. I had oiled the Diana’s piston seal heavily for the Krytox test and it’s still pretty oily. And, when I chronographed today’s short test I was getting velocities like 183 f.p.s. and 201 f.p.s., interspersed with the 460s. I knew from seeing the pellet’s penetration in the duct seal trap that it wasn’t shooting that slow. So — what could it be? Well, it’s big lesson number two!

The rifle is dieseling, as all spring-piston guns must, but because there is a lot of oil on the piston seal, this one is smoking a lot. Apparently the smoke is escaping the muzzle ahead of the pellet and tripping the start screen. That starts the chronograph’s clock, so the time of flight appears to take longer. The solution is to back up the muzzle a foot from the start screen and everything works fine again. In those 12 inches the smoke dissipates and only the pellet is seen by the skyscreens.

I’m going to leave my Diana 27 tuned with Krytox for the time being. It’s back to being as smooth as I remember and I want to give the Krytox a chance to break in.

How about that? A return to normal velocity and the Krytox tune smoothed out — I got a twofer, just by adding a new breech seal! And, I don’t need to tear this rifle apart again. I guess that’s really a threefer!

What’s coming next is a look at the Diana 35. That was the air rifle that started this whole series of reports. There is a lot to tell you about the 35, but let’s let that wait until then.