Today we look at the accuracy of the Diana 26 I have been testing. Two things are different about this air rifle. It’s a Diana 26, which I didn’t hear of until recently and it’s a .177, which I haven’t had much luck with. So I chose 7 different pellets, in hopes of finding one or more than were accurate.

I shot from 10 meters off a bench using the artillery hold, though I had to hold the rifle tighter than normal because the butt is so slippery against my shoulder. I shot 5-shot groups to speed things up, but decided I would shoot a final 10-shot group with the pellet that was most accurate.

I sighted-in with Air Arms Falcon domes. The first shot hit 1.75-inches above the aim point and a little to the left, so I adjusted the rear sight down and right. Shot two landed a little too low and still to the left so I adjusted again. Shot three was in the bull and close to the center, so sight-in was finished.

The first group was shot with Air Arms Falcon domes. Five pellets made a 0.444-inch group that was right on for elevation and just a little to the right. After this group I adjusted the rear sight one click to the left and never moved it again for the rest of the test. 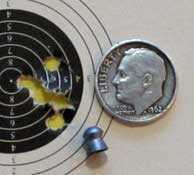 This group isn’t bad. It’s just not great. I had hoped for something tighter.

The second pellet I tested was the H&N Finale Match Light with a 4.50mm head. Five of them went into 0.666-inches at 10 meters. The group is vertical — a phenomenon that plagued me throughout the test. 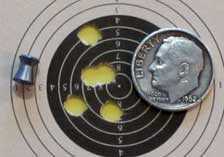 Next I tried RWS Superdomes. RWS pellets often do well in vintage Diana airguns for some reason. This time the 26 put 5 of them into 0.743-inches at 10 meters. That’s not a good group. And notice that it is also vertical. I will discuss that at the end of the test.

I have to comment on the trigger on this rifle. It’s 2-stage and very crisp. I pull through the first stage and the blade stops at stage 2 positively every time. It’s not a target trigger, but for a sporting trigger it’s fine.

The next pellet I tried was the Sig Match Ballistic Alloy wadcutter. In this group there may have been an aiming error, because 4 pellets are in a tight round group that measures 0.39-inches between centers, and then one stray opens it to 0.923-inches. If I’m still shooting well at the end of this test I may return and shoot a second group of five Sig pellets. 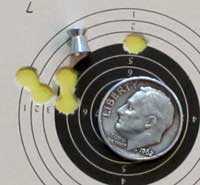 The next pellet I tested was the JSB Exact RS dome. The 26 put five of them into 0.846-inches at 10 meters. Once more the group is vertical. 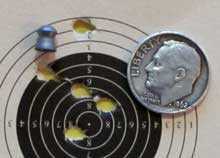 Next I tried five H&N Match Green target pellets. At 10 meters they landed in a group that measures 0.65-inches between centers. This group isn’t as vertical as many have been .

The last pellets I tested were the heavy H&N Baracuda Match with 4.50mm heads. They are really too heavy for the power of the 26, but in .22 caliber Diana 27s I have found heavy pellet to be accurate. Five of them went into 0.655-inches at 10 meters. It’s not a great group, but for the 7 pellets tested today, it’s not that bad.

I said I was going to select the most accurate pellet and shoot a 10-shot group with it at the end. That pellet is the Falcon — the first pellet I tested. Remember after that first group I did move the rear sight one click to the left.

This time 10 Falcon pellets gave me a 1.089-inch group that is almost straight up and down. This is not the pellet — it’s me. I am clearly finished shooting! 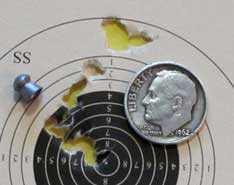 I tested 7 pellets in all. I expected there to be one or more that would group well. Falcons did the best and even they were just mediocre. But let’s talk about those vertical groups.

One vertical group in eight is probably the pellet. I had four out of eight and that starts looking like the sights. This 26 has a tapered post front sight and a vee rear notch — about the worst possible sights for precision. They are quick to get on target and fine for plinking, but not suited for shooting targets. 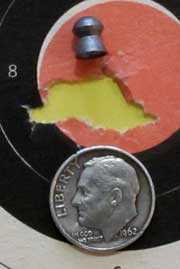 This is one more episode in my ongoing saga with the vintage .177 Dianas. I just can’t seem to get them to shoot!

It’s been fun testing a vintage rifle I had no idea existed until recently. I will set this one aside for now and move on to my other projects. 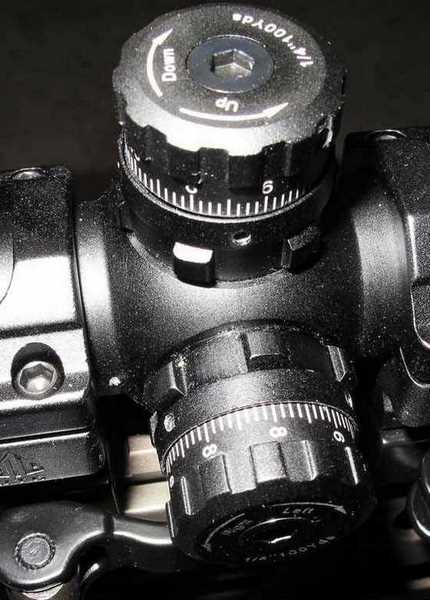 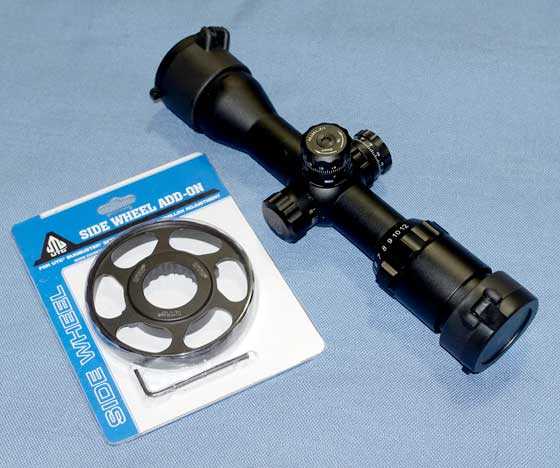 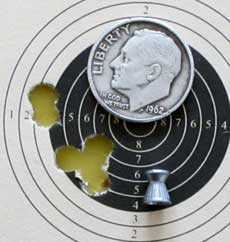